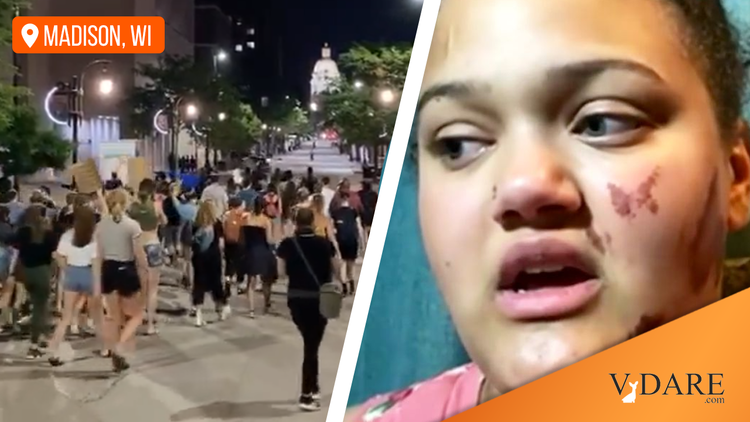 Protesters Demand Justice for Althea Bernstein (Does She WANT Justice?)

Earlier: Althea Bernstein, Jussie Smollett, and Tawana Brawley: Is This A Hate Hoax Or Firebomb Coverup?

MADISON (WKOW) – Madison’s Police chief denies a claim made by a protest leader that detectives asked a teenager who maintained she was the victim of a disturbing, hate crime to recant her story. …

A protest leader told a group of one hundred people in downtown Madison Tuesday that she was not only outraged over the Kenosha Police shooting of Jacob Blake, but also of the treatment of [Althea] Bernstein.

“That’s inaccurate,” Interim Madison Police Chief Vic Wahl told 27 News of the claimed request of the teenager to recant. “I can tell you we’ve spent hundreds of hours investigating that case. It remains an open investigation.”

They’ve got us working in shifts!

… 27 News representatives have made several requests of Madison Police for any video they may possess of the intersection of State and West Gorham streets, or nearby streets, at the time on June 24 Bernstein says the incident took place. But each request has been denied by police custodians, citing the ongoing investigation.

On the same evening of the incident involving the teen, authorities say protesters toppled statues, attacked a state lawmaker, and Madison’s City-County Building was firebombed.

There is a $10,000 reward for information leading to arrests and convictions in connection to the burning of Bernstein.

How about if Althea Bernstein is let go in return for a public statement by her on video admitting her guilt in concocting a blood libel of whites and calling for increased awareness of hate hoaxes and anti-white defamation?