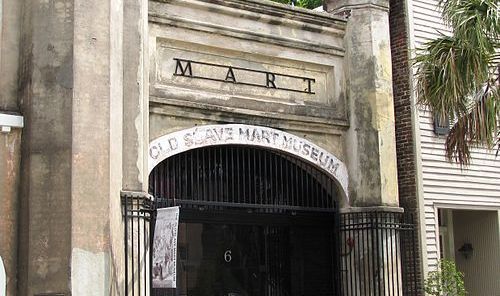 When South Carolina lawmakers voted last year to remove the Confederate Battle Flag over the state capitol in what then was termed a "compromise," there may have been some who really believed it would help pacify the racial-cultural revolution the attack on the flag represented. If that's what they thought, they were wrong, because Phase Two of the revolution in South Carolina is now about to kick off.

Phase Two consists of the construction of at least one and probably two museums centering on slavery and wallowing in the factoid that Charleston was the main port of entry for African slaves imported into North America. As Joseph Riley, Jr., the mayor of Charleston and the main brain behind the museum project, describes them, it's clear the museums are not for teaching real history but for dethroning the past of one people and enthroning the myths of another.

Museum Number One will be a renovated "Slave Mart" in Charleston, where tourists, children and those dumb enough to fall for it will be drilled in the racial myth the project will preach. But it's Museum Number Two that's the Sherman Tank of the new assault.

Museum Number Two will be a $30 million palace of racial guilt and racial reconstruction, "a story museum that would talk about this tragic human practice" and "go beyond emancipation to about 1900, covering the period of Jim Crow in the South," says the mayor. The Rev. Joseph Darby, a black pastor who's also pushing the project, is even more blunt about what it's supposed to accomplish.

"This is South Carolina," the reverend growls. "We have people here who think Appomattox was a cease-fire, that the Civil War wasn't fought about slavery and that good treatment of slaves was the rule rather than the exception." The point of the museum, in the reverend's mind, is to brainwash its visitors and hammer home all the mythologies and outright historical whoppers demonizing the white South that he and the mayor and their cronies can concoct.

One such whopper apparently concerns the slave revolt planned in 1822 by ex-slave Denmark Vesey, whom the New York Times in reporting the museum story says "was allegedly plotting a mass murder of whites. Some doubt that Vesey's plan was as bloody as it was then portrayed, among them Mayor Riley." The story also sports a caption on a picture of Vesey that tells us he was "hanged for supposedly plotting a slave revolt."

Charleston can have its museum of slavery if it wants, but it really ought not to let the mayor (or the New York Times) have anything to do with planning its contents. The most recent work on Vesey, by historian David Robertson, published by Knopf in 1999, makes perfectly clear what Vesey was plotting—to murder every white man, woman and child in the city of Charleston. The plot was betrayed to authorities by a black slave, and Vesey and 34 other conspirators were hanged. Mayor Riley really ought to give Mr. Robertson's book, which is mainly sympathetic to Vesey, a read before he gets his hands on the museum.

But if the mayor and the preacher aren't enough to wipe out the real history of the city, there's also the hired consultant from New York, Richard Rabinowitz, who is helping Charleston officials plan the museum. We're never told what Mr. Rabinowitz's expertise in history is, but then it ought to be clear by now that knowing anything about the real past is not a qualification for the job. Mr. Rabinowitz assures the Times that the museum will "tell an untold story that has to be brought to the surface. It's a fundamental fact we have to come to grips with." We're never told who "we" is either, let alone why "we" must "come to grips" with anything.

What the mayor, the reverend, the New York consultant and a small army of others are planning is simply a monument that will retell the history of Charleston in terms of the new racial myth being imposed on the state, the region and the nation—that the white South was a kind of pre-industrial concentration camp where blacks were raped, tortured, and murdered routinely. The new myth undermines and discredits any effort by whites, Southerners or not, to retain pride in their own past and identity and smothers any political resistance to the new racial assault on them before it can draw breath.

What the museum project tells us also is that the "compromise" that removed the Battle Flag from the state capitol was really no compromise at all but merely the signal for the renewal of war. Now that those waging the war have revealed their real goals, maybe those who fell for the "compromise" line will tumble to the truth.