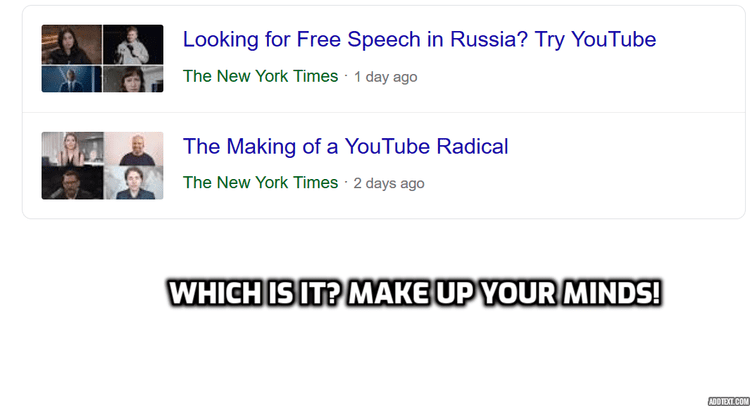 NEW YORK TIMES Doesn't Get Its Own Joke About Youtube

From the New York Times this weekend:

Caleb Cain was a college dropout looking for direction. He turned to YouTube.

Soon, he was pulled into a far-right universe, watching thousands of videos filled with conspiracy theories, misogyny and racism.

… Mr. Cain, 26, recently swore off the alt-right nearly five years after discovering it, and has become a vocal critic of the movement. He is scarred by his experience of being radicalized by what he calls a “decentralized cult” of far-right YouTube personalities, who convinced him that Western civilization was under threat from Muslim immigrants and cultural Marxists, that innate I.Q. differences explained racial disparities, and that feminism was a dangerous ideology.

Also from the New York Times this weekend:

Looking for Free Speech in Russia? Try YouTube
Stars of Russian YouTube include, clockwise from top left, Nadya Tolokonnikova, a member of Pussy Riot; Danila Poperechny, a stand-up comic; Nika Vodwood, a YouTube star; and Leonid G. Parfenov, who was kicked off state TV in 2004.

MOSCOW — Mainstream television in Russia, stage-managed by the Kremlin, barely mentions Pussy Riot, the anti-Putin punk band, or Aleksei A. Navalny, the country’s most prominent opposition figure. Forget about hearing much feminist talk, or humor at the expense of the government or Russia itself.

“The entire social, political part of television is controlled by the authorities,” said Leonid G. Parfenov, an independent news anchor who has been shut out of state TV since 2004 for being too critical of the government. “For that reason, you cannot consider this television journalism — it is just propaganda, they are just employees of the presidential administration.”

Yet voices that the government would mute are heard regularly by tens of millions of Russians in another format: YouTube.

For more freewheeling opinions and commentary — particularly from those critical of President Vladimir V. Putin — YouTube has become the leading way to reach Russian audiences. In particular, it is challenging — if not supplanting — state TV as a source of information for the young.