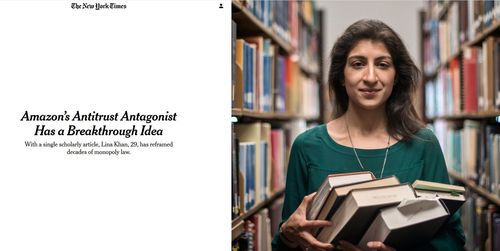 With a single scholarly article, Lina Khan, 29, has reframed decades of monopoly law.

To be precise, she didn’t actually have a new idea, she just went back and read old Progressive antitrust authors like Ida Tarbell (1857-1944), the daughter of an oilman put out of business by John D. Rockefeller’s Standard Oil monopoly.

In early 2017, when she was an unknown law student, Lina Khan published “Amazon’s Antitrust Paradox” in the Yale Law Journal.

The dead books are on the top floor of Southern Methodist University’s law library.

“Antitrust Dilemma.” “The Antitrust Impulse.” “Antitrust in an Expanding Economy.” Shelf after shelf of volumes ignored for decades. There are a dozen fat tomes with transcripts of the congressional hearings on monopoly power in 1949, when the world was in ruins and the Soviets on the march. Lawmakers believed economic concentration would make America more vulnerable. …

In early 2017, when she was an unknown law student, Ms. Khan published “Amazon’s Antitrust Paradox” in the Yale Law Journal. Her argument went against a consensus in antitrust circles that dates back to the 1970s—the moment when regulation was redefined to focus on consumer welfare, which is to say price. Since Amazon is renowned for its cut-rate deals, it would seem safe from federal intervention.

Ms. Khan disagreed. Over 93 heavily footnoted pages, she presented the case that the company should not get a pass on anticompetitive behavior just because it makes customers happy. Once-robust monopoly laws have been marginalized, Ms. Khan wrote, and consequently Amazon is amassing structural power that lets it exert increasing control over many parts of the economy.

Amazon has so much data on so many customers, it is so willing to forgo profits, it is so aggressive and has so many advantages from its shipping and warehouse infrastructure that it exerts an influence much broader than its market share. It resembles the all-powerful railroads of the Progressive Era, Ms. Khan wrote: “The thousands of retailers and independent businesses that must ride Amazon’s rails to reach market are increasingly dependent on their biggest competitor.”

She has her own critics now: Several leading scholars have found fault with Ms. Khan’s proposals to revive and expand antitrust, and some have tried to dismiss her paper with the mocking label “Hipster Antitrust.”

The Dream of the 1890s Is Alive in Portland.

… Ida Tarbell, the journalist whose investigation of Standard Oil helped bring about its breakup, wrote this about John D. Rockefeller in 1905:

“It takes time to crush men who are pursuing legitimate trade. But one of Mr. Rockefeller’s most impressive characteristics is patience. … He was like a general who, besieging a city surrounded by fortified hills, views from a balloon the whole great field, and sees how, this point taken, that must fall; this hill reached, that fort is commanded. And nothing was too small: the corner grocery in Browntown, the humble refining still on Oil Creek, the shortest private pipeline. Nothing, for little things grow.”

When Ms. Khan read that, she thought: Jeff Bezos.

Her Yale Law Journal paper argued that monopoly regulators who focus on consumer prices are thinking too short-term. In Ms. Khan’s view, a company like Amazon—one that sells things, competes against others selling things, and owns the platform where the deals are done—has an inherent advantage that undermines fair competition.

I pointed out four years ago in Taki’s that progressives had turned against Progressives, specifically on antitrust:

Better a Crook than a WASP: The Left Ditches Progressivism
by Steve Sailer

… One of the less heralded developments of recent decades has been the decline of appreciation on the left for the progressive reformers of the first decades of the 20th century and their battles with the robber barons.

When I was young, the history books, which were largely written by those progressives’ proteges, were filled with their praise. Today, however, progressive victories against inequality, such as anti-monopoly enforcement and immigration restriction, are ignored or denounced. Perhaps those old progressives seem too WASP for contemporary tastes. That the most effective opponents of crony capitalism tended to be the distant cousins of the capitalists themselves subverts the dominant narrative that the United States must have been fated to white bread ruin without massive injections of more vibrant immigrant ethnicities.