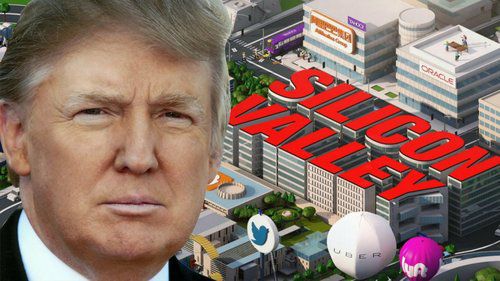 Google vs. Trump: “The Good Censor” On Collision Course With The Patriot President

The leaked internal Google briefing “The Good Censor” [PDF] has received suspiciously little attention from the Main Stream Media, but it represents the crassest statement yet of the Tech oligopolies’ intention to impose Silicon Valley Political Correctness on the U.S. As American Thinker Editor Thomas Lifson puts it: “I congratulate Breitbart.com for the scoop, and I urge everyone—I am looking at you, President Trump and Congress—to read and ponder the fate of the Republic unless this company is defanged, most likely by antitrust action, but possibly also via civil courts.” [Stunning 85-page Google memo 'The Good Censor' leaked to Breitbart, October 10, 2018]

What are Trump’s options? He’s certainly thinking about the issue.

The Washington Post reported recently that the White House was backing off a proposed executive order that would have required federal agencies to “investigate and/or prosecute” tech giants for bias. Administration officials told WaPo: “Although the White House is concerned about the conduct of online platforms and their impact on society, this document is not the result of an official White House policymaking process.” [White House distances itself from reports that Trump could target Facebook, Google and Twitter with a new executive order, by Tony Romm and Josh Dawsey, September 22, 2018]

WaPo reported Trump has demanded an executive order on this matter for some time, but all of the drafts have been deemed “unworkable.” Sources tell the Watcher that the fallout from the leak deterred the President but he still considers the issue a top priority for his base and he wants it addressed.

And Trump is right--it's urgent. Alarmingly, the Tech Totalitarians seem to be developing a blitzing technique, whereby they all suddenly jump a Politically Incorrect site and do everything possible to destroy its business--for example, Alex Jones and, most recently, the manosphere site Return Of Kings.

Of course, first, we have to shoot down True Conservative notions that it’s not the government’s job to resolve tech censorship. Dogmatic Conservatism Incers insist the free market will magically fix the problem and government intervention would somehow be worse than suppression of right-wing views. Some—such as The Weekly Standard’s Jonathan Last—have even celebrated this censorship as a necessary measure against “repugnant” voices [The Case for Banning Alex Jones, August 8, 2018]

All of these opinions are absolutely ridiculous and predicated on the notion that Big Tech won’t go after “respectable” conservatives, which isn’t even the case. PragerU, a mainstream conservative outlet, has been censored numerous times by Facebook and YouTube, in spite of its painfully respectable brand. And others will soon face the same treatment once the Tech Totalitarians realize they can continue this malfeasance with impunity. [Facebook Censors PragerU Videos And Shadow Bans Posts, by Kyle Perisec, The Daily Caller, August 17, 2018]

The “free market” can’t do anything about it. Google has cornered over 92 percent of the search engine market—a higher market share percentage than Standard Oil at its peak. Big Tech has made sure that Gab, a free speech alternative to Twitter, is barred from ever posing a serious challenge. And no one wants to use a “conservative” Facebook. [Hate speech crackdown spreads to behind-the-scenes tech, by Tony Romm and Elizabeth Dwoskin, Washington Post, August 10, 2018]

Big Tech has manipulated the free market to benefit its own interests and power. Tech execs know they don’t have to worry about conservative competition putting an end to their malpractices.

That leaves only one serious alternative: government intervention.

It is in America’s interest for this to happen. The public forums and printing presses of our day are Facebook, YouTube and Twitter. If you are barred from these platforms, you are effectively eliminated from the public square. Big Tech wants to ensure right-wing viewpoints are consigned to the dustbin and no one has the freedom to share those views in public.

This is where Donald Trump can step in and halt these disturbing efforts. Here are the two things the President can do without issuing an executive order.

Something as basic as Trump tweeting out criticism of Facebook and Google is actually remarkably effective. Tech giants are worried sick the President may target the industry and are wary of doing anything radical enough to draw his ire.

Corporate executives are cowards. They live in fear of bad publicity. It’s why so many companies cave to Leftist pressure campaigns—no corporation wants to be branded as inadequately “woke.”

This tactic hasn’t been as effective for conservative activists, but the President of the United States is a different matter. One tweet from him can impact market shares, inspire support for government regulation, inspire dozens of segments on cable news, and encourage congressional scrutiny. Big Tech does not want this.

In the past, they actually have taken steps placate conservative complaints. One such example is Facebook laying off the Leftist journalists who ran its Trending section over criticism it was too biased against conservative news sources. [Facebook Lays Off Journalists From 'Trending Topics,' Replaces With Algorithm, by Leif Walcutt, Forbes, August 26, 2016]

The power of the tweet is a strong weapon for Trump in his fight against tech censorship. Putting constant pressure on these companies to safeguard free speech increases the chances they will do so. Sources tell the Watcher that the Trump campaign plans to make this issue a central part of its agenda, as evidenced by campaign manager Brad Parscale’s op-eds and tweets [Big Tech is becoming Big Brother, Washington Examiner, August 16, 2018]

What we need is for Trump to tweet and talk about this on a weekly basis. He should call out Google and Facebook for their pernicious practices at every rally. He should tweet out stories showcasing their bias every time one is published. The pressure must be relentless and constant until these platforms decide to take up reform on their own.

If that fails or is insufficient, there is one direct action Trump can take:

Section 230 of the Communications Decency Act is a sacred privilege for social media companies. This law protects Facebook, Twitter, and other platforms from liability over the material published on their websites. One of the reasons these services are granted this privilege is the Congressional finding, embodied in legislation,  that they “offer a forum for a true diversity of political discourse.” [47 U.S. Code § 230 - Protection for private blocking and screening of offensive material] In contrast, newspapers are subject to libel actions over Letters to the Editor, because they are assumed to have exercised editorial judgement in publishing them.

Since it is highly questionable these platforms provide politically diverse forums anymore, it is arguably time for Congress to revisit Section 230. Not only is Big Tech’s censorship violating its spirit, so is their shifting claims on not being publishers. Indeed, Facebook’s lawyers have already paradoxically claimed that in some circumstances the company is a publisher, undermining the mega-platform’s numerous public claims that it is not a publisher. [Is Facebook a publisher? In public it says no, but in court it says yes, by Sam Levin, Guardian, July 2, 2018]

Both Google and Twitter have also undermined their own claims not to be publishers in litigation, according to court documents provided to the Watcher. Google claimed in its legal defense against PragerU’s lawsuit over censorship that it can exercise “editorial control and judgment” as a publisher. Twitter argued in court that it was similar to the New York Times and must have “exercise of editorial control and judgment” over the content it publishes.

Congress has an obligation to investigate these companies over their apparent Section 230 violations, and Trump should encourage them to do so. Nothing will terrify Big Tech more than having the President cheer on stripping them of their Section 230 protection.

Legislation amending Section 230 to explicitly state these companies may not engage in political discrimination would protect free expression for years to come.

All Trump has to do is suggest the idea to allies like House Majority Leader Kevin McCarthy to get this done.

Regardless of whether legislation would pass, it would be guaranteed to inspire serious reform in Silicon Valley. Every tech company would be desperate to prove it doesn’t censor conservatives and patriots and feel a chill at the prospect of suppressing popular right-wing views. Taking away Section 230 protection would make a serious dent on their businesses. They would want to do everything possible to keep it.

Even though we may not see an Executive Order to tackle tech censorship this year, we shouldn’t lose heart. Trump isn’t going to forget about this issue and he will see more headlines on the dastardly behavior of tech giants. We just need him to speak out more on this problem and press Congress to do something about it.