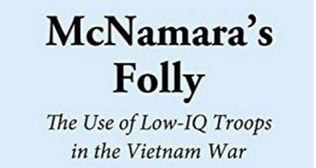 "McNamara's Folly: The Use of Low-IQ Troops in the Vietnam War" 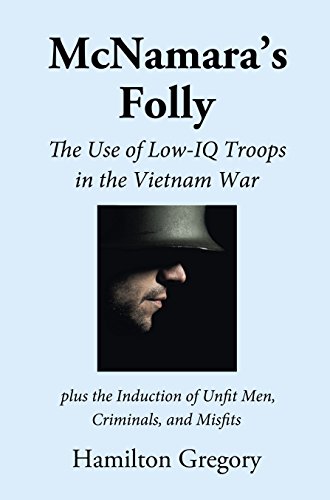 From Goodreads, a review by Gwern:

McNamara’s Folly: The Use of Low-IQ Troops in the Vietnam War

McNamara’s Folly: The Use of Low-IQ Troops in the Vietnam War
by Hamilton Gregory

It’s not well-known, but one of the most consistent long-term sponsors of research into intelligence has been the US military. This is because, contrary to lay wisdom that ‘IQ only measures how well you do on a test’ or book-learning, cognitive ability predicts performance in all occupations down to the simplest manual labor; this might seem surprising, but there are a lot of ways to screw up a simple job and cause losses outside one’s area. For example, aiming and pointing a rifle, or throwing a grenade, might seem like a simple task, but it’s also easy to screw up by pointing at the wrong point, requires fast reflexes (reflexes are one of the most consistent correlations with intelligence), memory for procedures like stripping, the ability to read ammo box labels or orders (as one Marine drill instructor noted), and ‘common sense’ like not indulging in ‘practical jokes’ by tossing grenades at one’s comrades and forgetting to remove the fuse – common sense is not so common, as the saying goes. Such men were not even useful cannon fodder, as they were as much a danger to the men around them as themselves (never mind the enemy), and jammed up the system.

Gregory’s book collates stories about what happened when the US military was forced to ignore these facts it knew perfectly well in the service of Robert McNamara & Lyndon Johnson’s “Project 100,000” idea to kill two birds with one stone by drafting recruits who were developmentally disabled, unhealthy, evil, or just too dumb to be conscripted previously: it would provide the warm bodies needed for Vietnam, and use the military to educate the least fortunate and give them a leg up as part of the Great Society’s faith in education to eliminate individual differences and refute the idea that intelligence is real.

There was a similar episode in the late 1970s after the Pentagon introduced a new version of its enlistment test in 1976, but issued scoring guidelines that overstated that potential recruit’s percentile rank. In the early 1950s, Congress had banned the military from allowing people in the lowest 10% of AFQT scores to enlist, but suddenly in 1976 everybody was a genius.

Senator Sam Nunn (D-GA) kept complaining to the Pentagon that old sergeants were complaining that they were signing up some real thickheads all of sudden, but the Pentagon kept shooing away Nunn’s questions by saying what could mere drill instructors know about the complexities of psychometrics. Then around 1979, the Pentagon admitted that Nunn’s informants were right and the Pentagon had screwed up AFQT scoring for the last 3 years.

I’ve never gotten an explanation of whether this was an honest botch or a covert policy to meet recruiting targets in the new Volunteer Army.