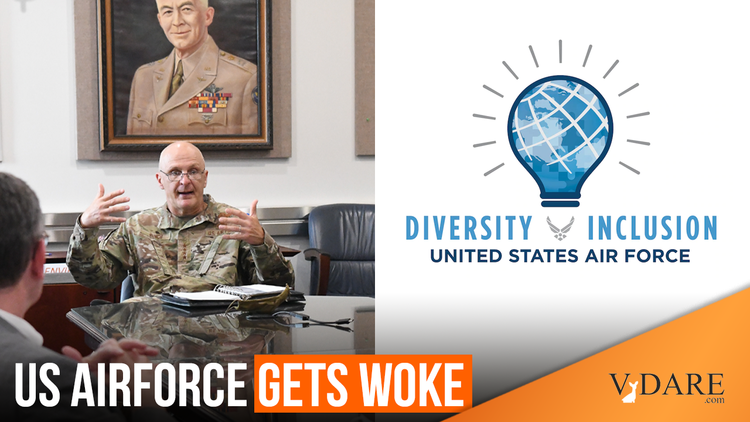 A Military Reader Says The US Air Force Is Getting Woke, Training Airmen To Be Sensitive

From: A Reader With Military Connections [Email him]

This is what the USAF is doing (I know the same is happening in the US Army—a friend of mine works at Aberdeen Proving Grounds and they are being subjected to the same stuff) and I am sure it is the same in the other services.

Funny how they are pushing “diversity” but I thought a foundational principle of the USA is E pluribus unum.

Just more info and confirmation of what is coming.

This is from the head of the  Air Force Materiel Command:

I wanted to update you on what we are doing as a command in response to recent sensing sessions and our Diversity and Inclusion efforts. Many actions have been implemented across the Air Force to include increased ROTC scholarship opportunities for minorities, revised military dress and appearance regulations and a lengthened approval period for shaving waivers that most often affect Black Airmen.  The Air Force Inspector General is also conducting a review into racial disparity across the Department in two specific areas—discipline processes and leadership development/promotion.

In addition to partnering on these efforts and more, AFMC is implementing specific command initiatives, many focused on our civilian Airmen. Utilizing fresh feedback from our sensing sessions, we are focusing initiatives to build a diverse, high performing workforce. The goal for these initiatives is clear--create an environment where every Airman feels accepted, valued and has the opportunity to achieve their full potential.

Here are some of the specific efforts:

Assess the Environment:  As we’ve done with the AFMC We Need initiative, we are collecting and analyzing data to make informed recommendations.  In addition to reviewing extensive data from numerous surveys and sensing sessions, we have initiated more extensive sessions at particular installations and continue to conduct listening sessions across the command. We’re also conducting a data deep dive on civilian discipline, hiring and promotion, and are creating a survey for AFMC Airmen, expected to release later this fall, to express opinions on how we can build a more diverse and inclusive culture.

Training:  Meaningful diversity training is an essential step to foster a more open, welcoming culture and advance initiatives to implement positive change.  Our training will be practical and tailorable to account for unique challenges driven by a particular mission or organizational culture.  We have partnered with Cornell University to create a cadre of trainers to help implement this curriculum across the command and will include D&I instruction as part of all foundational training within AFMC.  Initial Unconscious Bias pilot courses will begin in September.

Structure & Process:  We are aligning AFMC initiatives with Air Force plans and will develop a practical framework that synchronizes Center/installation efforts.  One such initiative is to establish a MAJCOM Barrier Analysis Working Group and D&I Council to analyze anomalies found in civilian and military workplace policies, procedures, and practices with an eye toward identifying their root causes, and, if those root causes are potential barriers to equal opportunity, devise plans to eliminate them. We are also expanding diversity recruiting efforts and reviewing how we can improve mentorship opportunities.

Building inclusive teams, facilitating difficult conversations within the workforce, articulating the benefits of becoming a more diverse organization and implementing best practices that promote a positive workplace culture will help get AFMC where we need to be; and I need everyone’s buy-in to make it happen.  Our continued success depends on it.

These initiatives are a start, but I know there is more work to be done. For more specific information on these actions and more, click here:

Thanks for all you do to support each other and the world’s greatest Air Force.

James Fulford writes: Here's the photograph of the leadership of the Materiel Command, four or five white guys in fatigues (for no reason) and a white civilian employee in a suit. The portrait on the wall shows a white guy from an era when Air Force Generals dressed like grownups. (I think it may be a USAF Shade 193 Summer Service Dress uniform, but whatever it is, it doesn't look like pajamas.) 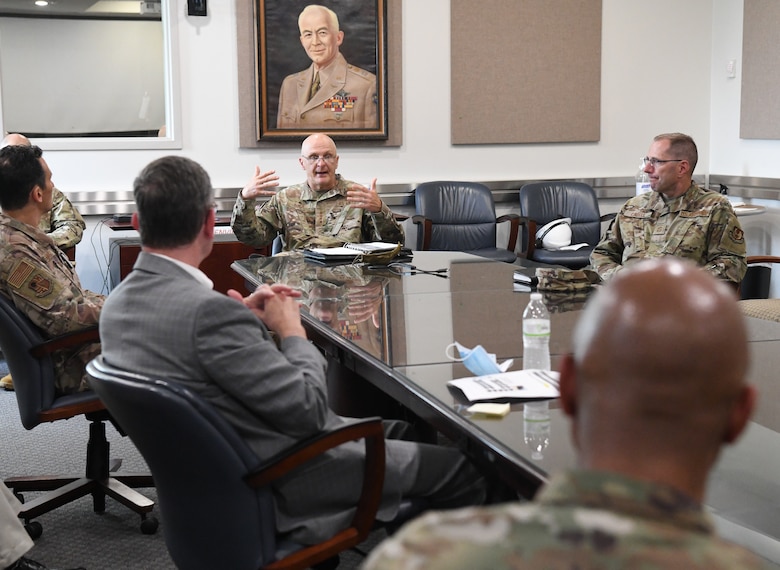 In any case, the Air Force is blaming itself, and its basically white culture, for the fact that black Airmen have higher rates of discipline problems and lower rates of promotion than white, Hispanic, and Asian Airmen, and apparently planning to fix this by letting black Airmen get away with more crime and be promoted out of turn—which is the same thing the rest of American society has been trying for years, but it's no way to run an Air Force.

The guy in the Dress uniform in the portrait would never have written a letter like that, because he was leading an almost entirely white Air Force—the kind that wins wars.