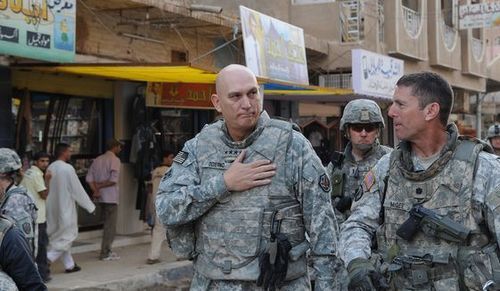 What is the purpose of the military? Is it to protect the nation, or to promote diversity and make its officers feel warm and fuzzy?

The U.S. military was founded by white men. White men still comprise the majority of combat troops and a disproportionate share of casualties. However, Army sociologists are now in a tizzy about there being too many white combat officers:

U.S. Army sociologists are worried that a lack of black officers leading its combat troops will have detrimental effect on minorities and lead to fewer black officers in top leadership posts.

So why should this be a problem if the officers are men who want to be officers and they are the most qualified?

“The issue exists. The leadership is aware of it,” Brig. Gen. Ronald Lewis told USAToday on Thursday. “The leadership does have an action plan in place. And it’s complicated.”

The Army reports that only 10 percent of its active-duty officers are black, which has contributed to its dearth of black officers leading soldiers with occupational specialties in infantry, armor and artillery.

Could it just be that blacks in our all-volunteer military prefer other sorts of units?

“It certainly is a problem for several reasons,” Col. Irving Smith, director of sociology at the U.S. Military Academy at West Point, told USA Today. “First we are a public institution. And as a public institution we certainly have more of a responsibility to our nation than a private company to reflect it. In order to maintain their trust and confidence, the people of America need to know that the Army is not only effective but representative of them.” USA Today’s research found that 25 relevant brigades it looked at did not have a single black commander in 2014. For 2015, the paper reported that there will be two black commanders of combat brigades.

Capt. Grancis Santana, 33, spoke to the paper and asserted that it wasn’t discrimination that was causing a lack of minority officers in key posts — the supply of desired soldiers in his military occupational specialty simply wasn’t there.

See, even a minority officer says discrimination is not the problem So what's the problem?

“It’s not a good feeling when you’re one of the few,” Capt. Santana told USAToday. “There was no discrimination; there are just not a lot of people like you.”

What a whining bellyacher! And this guy is a military officer! Drive on, do your job and quit whining.

The paper also noted that of the 238 West Point graduates commissioned to be infantry officers in 2012, only seven were black. One of the Army's plans for addressing the issue will be to put more emphasis on recruiting and mentoring minority officers.