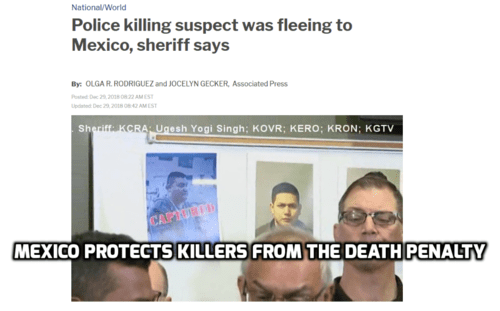 In the still of the last night of 2018, the silence of California Dems chilled the air and airwaves.

But not a peep was heard from Harris about the brutal shooting death of Newman, California, Police Department Cpl. Ronil Singh at the hands of a Mexican gang member illegally in the country and protected by the very sanctuary policies Harris champions.

But not a peep was heard from Pelosi about Singh, the suspected illegal immigrant murderer, or the arrests of a total of seven alleged accomplices—all reported to be illegally in this country as well.

Border wall opponent Sen. Dianne Feinstein released a public letter to the Customs and Border Patrol agency on the day of Singh's murder to voice her "strong concern about the recent deaths and illnesses of children detained in Border Patrol custody, and to request a full accounting and a revised protocol to prevent such tragedies from occurring in the future."

But not a peep was heard from Feinstein about Singh, no call for investigation of how the suspected murderer and his alleged accomplices arrived in the U.S., were able to evade arrest and detection, and who employed them, and aided, abetted, and sheltered them.

Neighbors, friends and co-workers turned out in full force for a candlelight vigil this week memorializing the dedicated, patriotic, compassionate, hard-working husband and father of a 5-month-old baby. But rabble-rousing liberal politicians, so quick to rush down to the border to exploit the migrant caravan crisis and sabotage President Donald Trump's efforts to keep America safe, were nowhere to be found.

How could any decent citizen not be moved by Reggie Singh, who broke down in tears while expressing thanks to local, state and federal officers upon the arrest of his hero brother's suspected murderer after an intense multiagency manhunt?

How could any public servant not be outraged by the revelations of Stanislaus County Sheriff Adam Christianson, who reported that Ronil Singh's suspected murderer from Mexico had worked illegally as a laborer, had known gang affiliations, and had two prior drunk driving arrests before the fatal traffic stop and attempted escape back to Mexico.

California's sanctuary laws, supported by every California Democrat and signed into law by Gov. Jerry Brown, barred local authorities from reporting the alleged cop-killer for his prior criminal arrests to ICE.

The priorities couldn't be starker: Open borders Democratic hearts bleed for those bent on undermining our sovereignty, while they turn blind eyes to legal immigrants like Indo-American Singh, originally from Fiji, who honored our institutions and enforced our laws.

Singh was the true story of the American dream, brought down by the ongoing open borders nightmare. He cherished his family roots and heritage, but embraced the privileges and responsibilities of legally obtained citizenship as a fully assimilated American. And this is precisely why California Democrats won't say his name, acknowledge his sacrifice or investigate the policy failures that led to his death.

The silent Dems have spent 30 years obliterating the difference between legal and illegal immigration.

They've spent the past year demonizing law enforcement officers at both borders and across the interior, stoking fear and hatred of those who put their lives on the line 24/7/365.

To speak Cpl. Ronil Singh's name is to admit the blood on their own hands.