Steven Bannon Calls The Media "The Opposition Party"—And Then They Prove It! 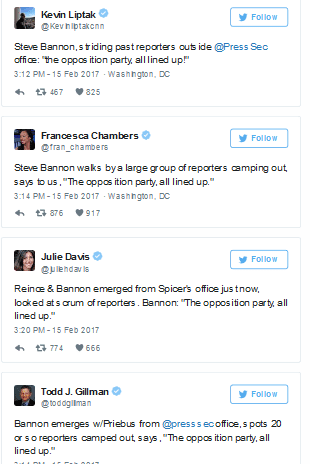 Steven Bannon emerged from a meeting with Reince Priebus and Sean Spicer, and on sighting the media, gave them a good jab: "The opposition party, all lined up."

She ended her post with a bit of fake news: "Those outlets aren’t usually grouped together in any way, least of all as a unified party sharing any one ideology, oppositional or not, but this is a new era for the press and the people they serve."

Right. The legacy media doesn't have an ideology.