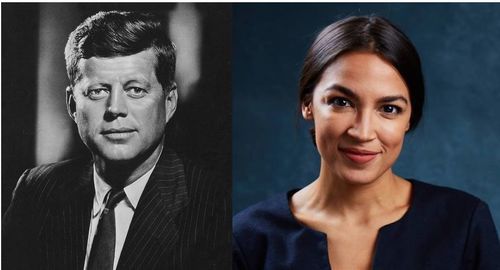 Patrick J. Buchanan: No, This Is Not JFK's Democratic Party

And Thursday, the day Rashida Tlaib was sworn in, her hand on a Quran, our first Palestinian-American congresswoman showed us what we may expect. As a rally of leftists lustily cheered her on, Tlaib roared, "We're gonna impeach the (expletive deleted)!"

Not only was no apology forthcoming, the host of the New American Leaders event where Tlaib spoke warmly endorsed her gutter language.

Her remarks, said Sayu Bhojwani, "were raw and honest, and came straight from the heart. ... a refreshing break from the canned comments our elected leaders usually make. Tlaib spoke ... with the fire that so many at our event wanted to hear."

Sunday, Alexandra Ocasio-Cortez, 29, the youngest member of the new House, told CNN there is "no question" President Donald Trump is a "racist," for he regularly uses "historic dog whistles of white supremacy."

While the Democratic Party is celebrating a diversity that insists that the more women, persons of color and gays in leadership ranks, and the fewer white males, the stronger and better the party, has all of America embraced this as an ideal?

Is there no limit to the ideological, political, religious, racial and ethnic diversity a party and nation can tolerate before it comes apart?

Are Democrats inviting an eventual Balkanization of their party and country?

Consider. This week, Julian Castro, former mayor of San Antonio and HUD secretary, appeared about to enter the race for the Democratic nomination. Castro has seen fellow Texan Robert F. O'Rourke, who goes by the nickname "Beto," walk off with his Hispanic constituency in a 2018 Senate race. Castro intends to win it back it in the Democratic primaries.

In December, Maze Jackson, morning host of a radio station that reaches into Chicago's black community, said of the mayoral election to succeed Rahm Emanuel, where 21 candidates have filed and a black woman and a Hispanic woman are the front-runners, "This thing is going to get so tribal."

The Democratic front-runners for the presidential nomination—Joe Biden, Bernie Sanders and Beto—are all white males. Ranked just below them are black Senators Cory Booker and Kamala Harris.

South Carolina is a state where a large slice of the Democratic vote is African-American—Jesse Jackson won the caucuses in 1988—and Harris and Booker should expect to do well if they do not split that vote.

While racial and ethnic voting is not new, it appears much more intense.

In the last Congress, the 33 U.S. congressional districts with the largest concentrations of black voters almost all elected African-Americans who became members of the racially exclusive Black Caucus.

The first two battles of 2020, Iowa and New Hampshire, are in states predominantly white. Sen. Elizabeth Warren has made several stops in Iowa with impressive turnouts, putting pressure on Biden and Sanders to decide soon.

But while Biden is the front-runner, consider how far away the ex-vice president is from the new realities in his party.

Though millennials are one voting bloc Democrats are courting most, Biden would be the oldest president ever elected. He was in the Senate for a decade before Ocasio-Cortez and Tlaib were even born.

Biden is an old white male in a party that wants the torch passed to women and minorities. He backed George W. Bush and Dick Cheney in voting for the war in Iraq. He backed an anti-crime bill in the early 1990s that incarcerated individuals now gaining release by the latest crime bill. As Judiciary Committee chair, he presided over the hearings that resulted in a vote to elevate Clarence Thomas to the Supreme Court.

The Republican Party, even with the never-Trumpers gone, still seems more united than a Democratic Party where the differences are not only ideological but also racial, religious and tribal.

Ocasio-Cortez is backing a hike in the top federal income tax rate to 70 percent. Castro has suggested taking a look at a top rate of 90 percent. How will this sit with the big Democratic donors?

Joe Biden, like Pelosi, was raised Catholic in a Church that taught that homosexuality was immoral and abortion was the killing of the innocent unborn for which the sanction was automatic excommunication.

Today, the Democratic Party celebrates same-sex marriage as social progress and regards abortion as a cherished constitutional right. A floor battle erupted at its 2012 Charlotte, North Carolina, convention over whether God should even be mentioned in the party platform.

Yet Nancy Pelosi did last week denounce as "immoral" the idea of building a security wall along America's border with Mexico.

No, this is not JFK's party anymore. That party is long dead.