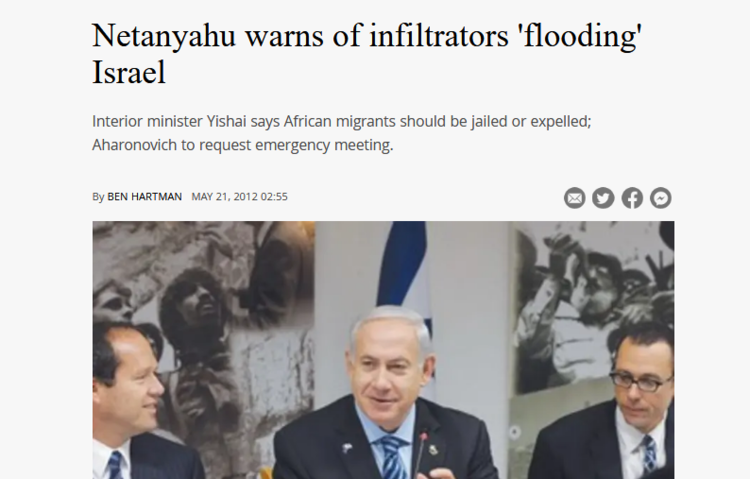 Illegal infiltrators threaten Israel’s character as a Jewish and democratic country, Prime Minister Binyamin Netanyahu said at the beginning of the weekly cabinet meeting on Sunday.

The prime minister spoke of the importance of finishing construction of the Egyptian border fence and working to send away “those [illegal migrants] who are already inside.”

Netanyahu said the latter will be done in part by punishing employers who hire illegal migrants.

The growing population of more than 50,000 illegal African migrants has become a hot-button issue, with the weekend editions of all three major Hebrew dailies featuring lead stories relating to the issue.

A little over three weeks ago, African migrants were targeted in a series of Molotov cocktail attacks in south Tel Aviv’s Shapira neighborhood. In addition, there have been a series of sexual assaults in Tel Aviv over recent weeks that police say were carried out by African migrants.

Also on Sunday, Interior Minister Eli Yishai (Shas) repeated his call to jail illegal African migrants, most of whom he said were involved in crime.

Netanyahu is at a peak of popularity and power within Israel at the moment. He recently called for elections, then called them off when a major opposition party, seeing the writing on the wall, agreed to join his coalition as subordinate partners. So, he's dealing from a position of strength here, with his team holding 96 of 120 seats in the Knesset.

Generally speaking, much can be learned from Israel about how an intelligent people govern themselves.