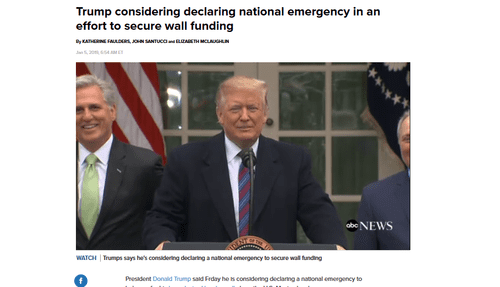 The Watcher wrote a few days before the partial government shutdown that it appeared President Trump would capitulate to his enemies and pass on a fight over the wall. I was fortunately proved wrong. President Trump has defied expectations and kept the government shut down for over two weeks [No Deal To End Government Shutdown As Negotiations Continue In Washington, By Shannon Van Sant, NPR, January 5 2019]. He has even again raised—albeit, as usual, in answer to a press question—the possibility of declaring a National Emergency and using the military to build the wall. [Trump considering declaring national emergency in an effort to secure wall funding, by Katherine Faulders, John Santucci, and Elizabeth McLaughlin, ABC, January 5, 2019]

But how long can the president hold out—and what kind of deal might he accept?

At this moment, it looks like Trump can keep the government partially shut down for as long he wants. The Republican-controlled Senate will not pass a spending bill he opposes, and certainly will not help override his veto.

But there’s a real concern over what Trump might give in exchange for wall funding. Senator Lindsey Graham has floated the idea of offering permanent legalization of illegal aliens who came to the U.S. as minors (the so-called “Dreamers”) in exchange for $5 billion for the wall. Graham would also like to throw in the extension of Temporary Protected Status to thousands of Haitian and Central American migrants. [Graham floats trading DACA, TPS protections for $5 billion in wall funding to end shutdown, by Camilo Montoya-Galvez, CBS News, December 31, 2018]. Needless to say, there is no proposal to block the massive chain migration this would trigger.

The South Carolina senator is optimistic this may occur. “I think that's in the realm of possibility. The president didn't commit, but I think he's very open minded. I know there's some Democrats out there who would be willing to provide money for a wall, border security if we could deal with the DACA population and TPS people," he said last Sunday.

But neither Democrats nor the White House are rushing to accept the deal. Graham and others have claimed that Trump is willing to consider such an option, but his public pronouncements and lack of communication with Democrats cast doubt on that. [No end in sight to shutdown as lawmakers mull over options, by Alexander Mallin and Katherine Faulders, ABC News, January 2, 2019]

Reports suggest that Trump has made $2.5 billion for the wall the lowest figure he’ll agree to. Yet last week Trump himself disputed that notion. "No, not $2.5, no," he said at a presser. "We're asking for $5.6. And you know, somebody said 2.5. No. This is national security we're talking about."

Ideas from other GOP senators aren’t much better than Graham’s. Sen. Lamar Alexander, who recently announced he won’t seek re-election in 2020, laid out three options for a wall deal in a Washington Post op-ed. The first option is to “go small” and only ask for $1.6 billion for the wall and another billion for ports of entry. The second option is to offer legalization to Deferred Action for Childhood Recipients in exchange for the full $25 billion for the wall. [Trump could reopen the government and build a lasting legacy all at once, by Lamar Alexander, The Washington Post, January 2, 2019]

The final option, which Alexander praises as “going bigger,” would be to revive the Gang of Eight amnesty bill. That terrible legislation would have given millions of illegal immigrants a path to citizenship. All Trump would get for this Amnesty is $40 billion for “border security.”

None of these options are good in the eyes of immigration patriots. Fortunately, Trump appears opposed to options 1 and 3 and is wary of option 2.

There is a chance that the president may consider giving Democrats permanent legalization for DACA recipients in exchange for wall money.  Sean Hannity, who talks frequently with Trump, claimed on his Fox News show Thursday that the president is willing to put DACA on the negotiation table with Democrats.

However, Democrats are fanatically opposed to any measure that would build the wall. “A wall is an immorality. It’s not who we are as a nation,” newly ordained House Speaker Nancy Pelosi told reporters Thursday. “We’re not doing a wall. Does anybody have any doubt about that? We are not doing a wall.” [Pelosi says no wall, while Trump allies put DACA on the table, by Jake Sherman, Anna Palmer and Daniel Lippman, Politico, January 4, 2019]

Of course, this contrasts with Democrats’ attitude just last year. Democratic leaders were willing to do this deal--for the full $25 billion, not just $5 billion--during DACA negotiations in the early months of 2018. It was the White House which rejected this offer—because it made no advances on reforming legal immigration, such as ending chain migration and abolishing the diversity visa lottery.

Remember that in the Amnesty fights of 2006 and 2013, Democrats supported a border fence [When Democrats embraced the 'Southern Border Fencing Strategy', by Byron York, Washington Examiner, December 26, 2018] In 2009, now-Senate Minority Leader Chuck Schumer said “illegal immigration is wrong and a primary goal of comprehensive immigration reform must be to dramatically curtail future illegal immigration.” [CHUCK SCHUMER IN 2009: ‘ILLEGAL IMMIGRATION IS WRONG’, by Amber Athey, The Daily Caller, September 6, 2017]

But now the Democratic Party feels that any restriction on migration amounts to fascism. Open borders is, effectively, the only policy now allowed in the party. This is reflected by the insidious sanctuary state policies of California and New York Governor Andrew Cuomo’s recent pardon of criminal illegal aliens at risk of being deported. [NY Gov. Cuomo Pardons Immigrants at Risk of Deportation, Takes Swipe at Trump, Fox News, January 1, 2019] “Abolish ICE” went from a fringe idea to the favorite proposal of Democratic presidential hopefuls over the course of 2018.

The Democrats actually believe no solution to DACA is a good political weapon for 2020. They know that any concession to the wall will outrage their activists, who sees immigration patriotism as full-blown neo-Nazism. They also don’t want to hand Trump a win that may help him in the upcoming presidential election.

In 2020, every serious Democratic candidate will insist on far-Left immigration policies. Every migrant claiming to be a refugee will be a refugee, walls are racist, ICE is the modern-day SS, we need more immigration, and it’s good to replace American workers with Latinos.

This extremism leaves Trump in a tough spot. It’s doubtful he can get a deal on the wall, contrary to what Lamar Alexander believes. It’s also unlikely he will settle for the paltry sum Democrats want to offer.

The most likely scenario: Trump holds out for another two weeks and gets $2.5 or so billion for “border security” with some stipulation it can’t go to the wall. Trump is not going to get the wall through Congress. So the only other possible scenario: declare a national emergency, an option the president considered at a Friday press conference. [Trump says he is considering using emergency powers to build wall, by Zachary Cohen, Ryan Browne and Barbara Starr, CNN, January 4, 2019]

There are possible legal hurdles to that option and it’s unclear how much money he could divert from the Pentagon’s budget to finance the wall.

But, barring some unforeseen miracle, this is the only chance Trump has to build the wall. He may as well take it.

Regardless of whatever Trump decides on, he should keep the government shut down as long as possible. Average Americans don’t care about this shut and it is exposing the raging Elect-A-New-People lunacy of the Democratic Party to the general public. In the end, that will be more important that whether wall construction is begun now or later.