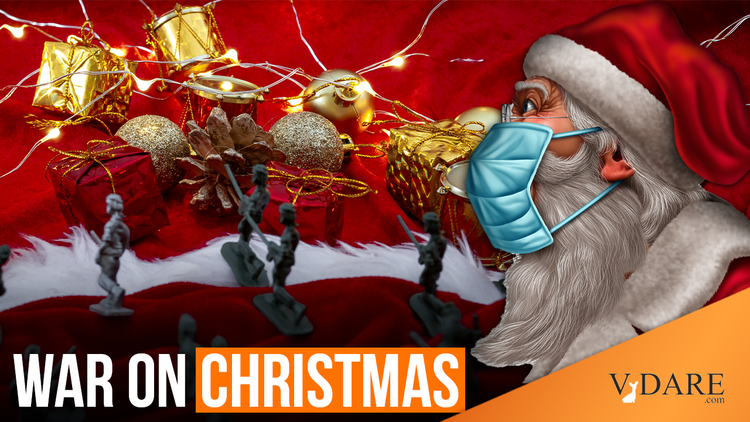 The War On Christmas Goes On, With COVID-19 Piling On. And Christophobia Is Getting Worse

When I started looking around for recent stories about the War On Christmas—something I’ve been doing for twenty years, and which got me my job here at VDARE.com—one of Google’s search suggestions was “War on Christmas meme”.

This is a typical War on Christmas meme: 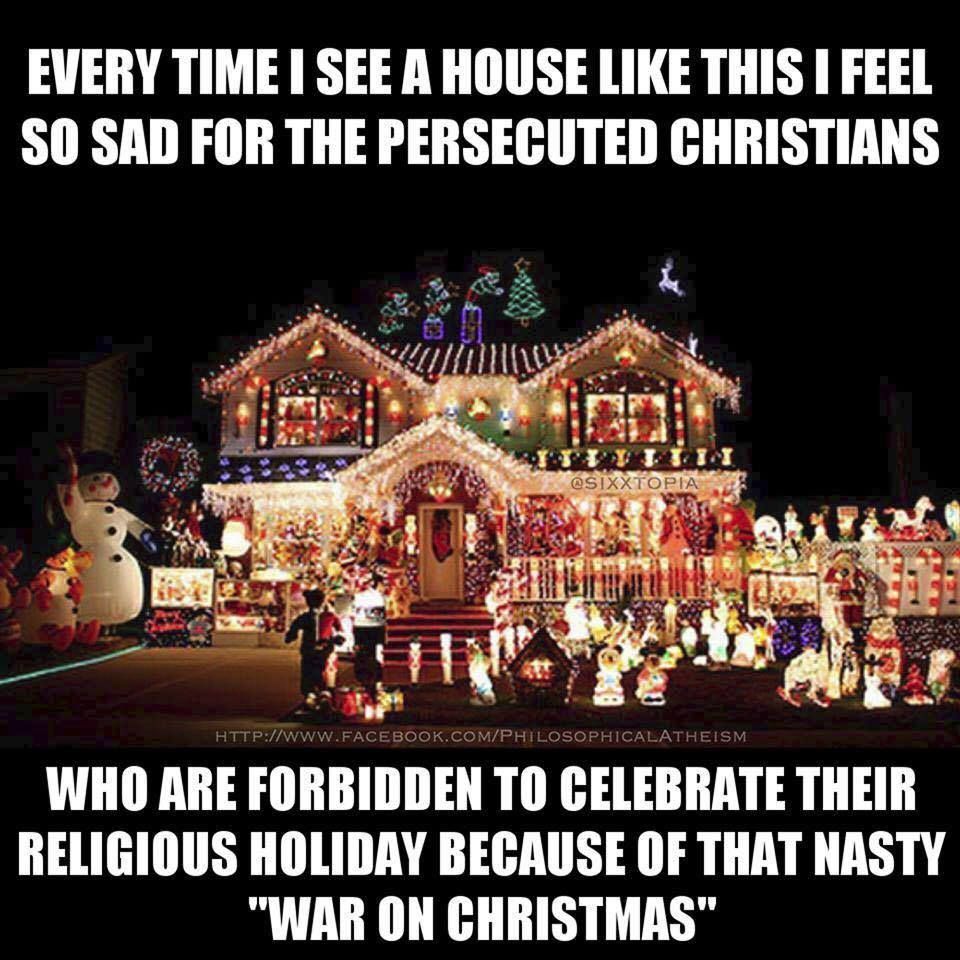 Well, it turns out this year, you’re not supposed to do that either.

Jonathan Kay has a story in Canada’s National Post that details it:

For connoisseurs of the war-on-Christmas genre, here’s a doozy out of Minnesota: a woman who’d festooned her house with holiday decorations got a note from neighbours, blasting her for erecting “a reminder of systemic biases against our neighbours who don’t celebrate Christmas or who can’t afford to put up lights.”

And the COVID kicker that really made this story go viral: she’s a hospital nurse who staffs the local coronavirus ward.

“The idea of twinkling, colourful lights are a reminder of divisions that continue to run through our society,” wrote the neighbours. “We must do the work of educating ourselves about the harmful impact an outward facing display like yours can have.”

I’m not Christian, and I have my own Grinch-like issues with boozy, high-carb yuletide goyishkeit. But reading this kind of thing makes me want to put antler ears on my dog and build a crèche out of Salvation Army candy canes.

Jonathan Kay: How humourless progressive puritans take offence at just about anything, December 12, 2020

Although Kay doesn’t mention it, this is a story from PowerLine’s Minnesota blog: A Christmas Diversity Grinch, December 8, 2020, which makes it clear that some Woke Minnesotans have indeed internalized the idea that Christmas is wrong and somehow harmful to the non-Christians in our midst—and that they have the right, and duty, to do something about it. 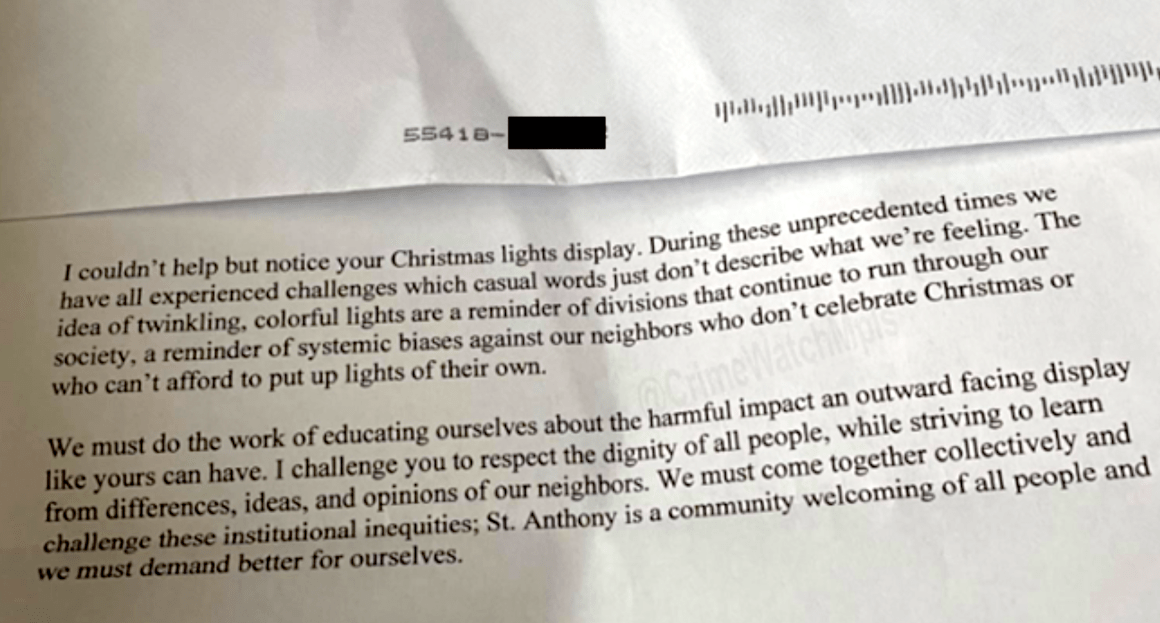 The idea of twinkling, colorful lights are [sic] a reminder of divisions that continue to run through our society, a reminder of systemic biases against our neighbors who don’t celebrate Christmas or who can’t afford to put up lights of their own.

This letter was originally posted by a Minneapolis Twitter Account, which provides this picture of one actual house that received this letter: 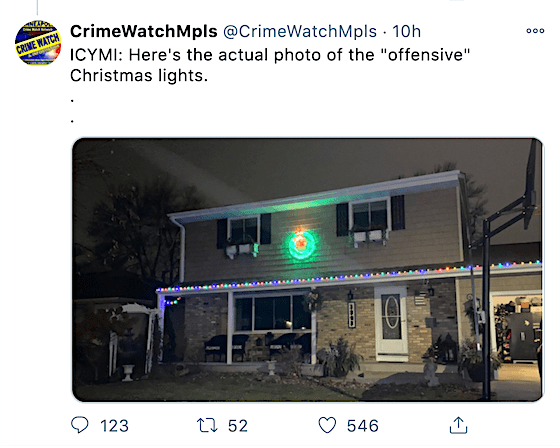 Compare that with the WOC Denial image at the top.

I expect most of our readers don’t suffer from War On Christmas Denial. Myself, I react like the Alliance Defending Freedom’s Jordan Lorence, a man who’s been fighting against the War On Christmas since the Reagan Administration, who said that when he heard people saying there was no War On Christmas, he felt like “like Neil Armstrong listening to someone argue that NASA faked my Apollo moon landing!” 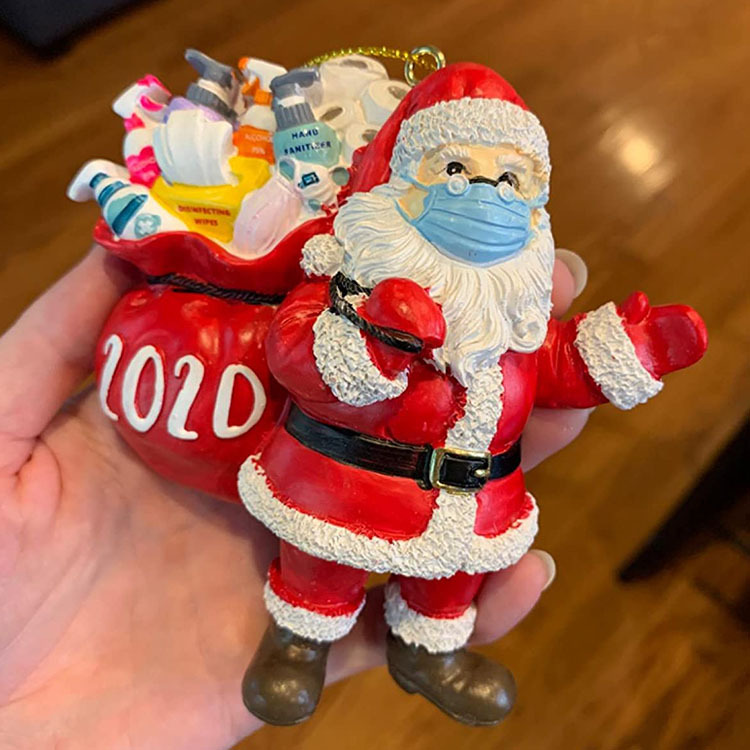 This year, of course, there’s a COVID War On Christmas—since they cancelled Easter and Thanksgiving, you’re not allowed to go see your family at Christmas, either.

When Tucker Carlson objected to this, Aaron Rupar of Vox said he was “on the side of the virus”.

Right-wingers like Tucker Carlson have not only politicized the virus but they’ve decided they’re on the side of the virus pic.twitter.com/XtQD54tuQb

By the way, it’s crazy to think that the culture war against Christianity doesn’t have deadly consequences:

The San Bernardino Immigrant Mass Murder was definitely a real War On Christmas, as were attacks on Christmas Markets in Europe, and there are mass shootings in churches on a regular basis [Priest killed: How often does violence enter churches? By Noelle Swan,  CSMonitor.com, June 12, 2014], as well as the looting, burning, and vandalism Michelle Malkin detailed in her last column.  We still don’t know what just motivated the shooter at St John The Divine this year, although after the usual delay news trickled out that he was an illegal immigrant.

Two more examples of this kind of thinking, specifically focusing on Fox and Tucker Carlson’s video/article  The Christmas lockdowns are here—but not for those who ordered them, December 3, 2020, attacked by Aaron Rupar, above.

Leftist Paul Waldman (formerly of the CultMarx vigilante group Media Matters) denies the War on Christmas in the Washington Post, capitalizes Black and White, says that Tucker Carlson is trying to get people killed, says Trump “praises and encourages white supremacists”, and finally, says that many things conservative complain of are “broad cultural forces you can barely do anything about”.

On one hand, Carlson is encouraging behavior that could literally get people killed, and he seems fine with that (since “death is inevitable” after all). But I actually find comfort in the fact that he’s doing it in a way that seems so trivial, with the preposterous claim that the powers that be are trying to “cancel Christmas.”

After spending so long listening to people on the right tell us that Democrats are satanic pedophile cannibals, after four years of a president who praises and encourages white supremacists, after watching one of our two parties stand by (or lend a hand) while that president wages war on American democracy, wouldn’t it be great if we could go back to arguing about whether Starbucks is offending Christians by not having Christmas trees on their holiday cups?

So let me urge Carlson to revive an issue he confronted two years ago: The dire threat presented by people calling gingerbread men “gingerbread people.” The lesson of this abomination, he said at the time, is that “the rest of us shouldn’t participate in our own spiritual neutering.”

That kind of thing used to be one of Fox’s core themes: the tragic loss of the cultural hegemony White Christians used to enjoy, seen through the little things guaranteed to stoke the ire of its elderly audience. A de-Christianized coffee cup, too many gay couples on TV, people speaking Spanish down at the Piggly Wiggly, teenagers with their rippity-rap music and Black boys who won’t pull up their pants — all of it just showed how things made sense back when you were young but now America is going down the toilet.

It’s not that the outrage they fomented was harmless — it certainly helped lead to the rise of Trump (who, among other things, promised that once he was elected you would once again be allowed to say, “Merry Christmas”). But the fact that it was so focused on broad cultural forces you can barely do anything about helped to keep it contained.

Well, of course, his idea is that white Christians are deluded about being targeted and helpless under the juggernaut of Cultural Marxism. The “broad cultural forces” he refers to, responsible for the de-Christianizing of the Public Square, lack of Official English, mass immigration, gay propaganda on TV, and so on are mostly caused by our immigration enthusiast Cultural Marxist elites—and the Kritarchs who block any law restricting these forces.

The black teens who “who won’t pull up their pants up” aren’t Cultural Marxists, nor are they any kind of elite, they’re gangsters, frequently killers. And Cultural Marxism, Inc, doesn’t want us to do anything about it [Why It Matters That a City Council in Louisiana Repealed a Ban on Saggy Pants, by Laura Thompson, Mother Jones, June 13, 2019]

And they don’t want us to do anything about the War on Christmas, either, but we will. As Waldman [Email him] pointed out, outrage at this kind of thing (and a promise he kept about “Merry Christmas”) helped get Trump elected President at least once.

Christmas is very powerful. When I won the Christmas Competition in the year 2000, one of the things I submitted was G. K. Chesterton’s 1909 short story The Shop Of Ghosts.

In it, Chesterton dreams that he goes into a shop, and meets Father Christmas, which is what the English tend to call Santa Claus, and finds him very old and, he says, dying.

The ghosts that come in to the shop to see if the old man is well include Charles Dickens, who when the old man says he’s dying says “"But, dash it all, you were dying in my time,  and you don't look a day older." Author  Richard Steele, from the 18th century, Ben Jonson from the 17th, and Robin Hood from God knows how far back all say "But I saw the man dying."

"I have felt like this a long time," said Father Christmas, in his feeble way again.

Mr. Charles Dickens suddenly leant across to him.

"Yes," said the old man, and sank shaking into a chair. "I have been always dying."

Mr. Dickens took off his hat with a flourish like a man calling a mob to rise.

"I understand it now," he cried, "you will never die."

Expect both Christmas and VDARE.com to survive not only this year, but the next and many more.

(Don’t forget to send War On Christmas atrocities to us at witan@vdare.com!)