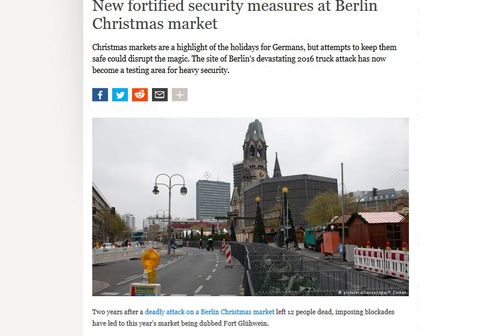 The OTHER War On Christmas; Militarized Berlin Christmas Market Another Casualty Of Diversity

[See Also: The Muslim War On Christmas In Germany—Real Deaths In The Christkindlmarkt by James Fulford, December 19, 2016]

Diversity eats through any authentic culture like acid. The Christmas markets of Germany are a joyful tradition that both Germans and guests have been able to celebrate for untold centuries. However, thanks to Mama Merkel's decision to invite thousands of hostile invaders into Europe, the Christmas markets are now dominated by repressive security measures and ugly barriers designed to prevent truck attacks.

Two years after a deadly attack on a Berlin Christmas market left 12 people dead, imposing blockades have led to this year's market being dubbed Fort Glühwein.

Christmas markets are an iconic symbol of the holiday season in Germany. They represent warmth, community and regional pride, and can inspire a sense of childlike wonder. This is partly why the 2016 terrorist attack cut so deep into the German psyche.

Cities and their police forces are determined to prevent another attack. And this year, Berlin has gone all out.

All week, workers have been installing 160 giant, square, lattice-work frames on the perimeter of Charlottenburg's Breitscheidplatz, the site of the fatal attack.

Enormous sand-and-stone-filled bags have been lowered into each frame, which have all been bolted to the next to form a long row. Narrow access points have been protected with extra bollards.

During the market, private guards will patrol the grounds, joined by a heavy presence of uniformed and plainclothes police officers.

The Berlin Senate has said the elaborate €2.5 million ($2.9 million) installation will provide "unprecedented protection" against trucks weighing up to 40 tons.

The UK Foreign and Commonwealth Office has also warned tourists about the dangers of going to a Christmas market in Germany.

Terror attacks are also classed as “very likely” in Germany.

On 19 December 2016, a lorry was driven into a crowd at a Christmas market in central Berlin causing 12 deaths and a number of injuries.

The FCO advised tourists to be vigilant. They added: “The German government has announced that increased security has been put in place as a precaution at public buildings, major events, transport hubs and large public gatherings.”

[Terrorist warnings: Is it safe to travel to these short-haul destinations this Christmas? by Harriet Mallinson, UK Express, November 24, 2018]

The danger of an attack seems to have decreased in recent months but of course all it takes is one person to commit havoc. Yet even if all attacks are prevented, there is a deeper question. Instead of a child's first memory of Christmas being traditional scenes of happiness and cultural unity, his or her first sighs will be giant concrete blocks and grim faced police staring suspiciously at crowds.

This is simply a more severe version of what has been done to the Christmas season generally. It's a small thing to say "Happy Holidays" instead of "Merry Christmas" or to sing "Winter Carols" instead of "Christmas Carols." Yet the process is cheap, corporate, and lessens everyone involved. Everyone knows what is being celebrated and why, but everyone is afraid to say lest some killjoy create a hostile media frenzy. From the ruined Christmas markets in Berlin to the "Winter Concert" at your local public high school, Christmas is a casualty of diversity. Multiculturalism, at least the way people use the word today, isn't a celebration of different cultures. It's the extinction of them.