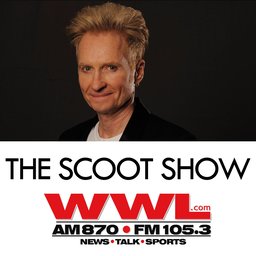 At WWL Radio in New Orleans,  there's a journalist who calls himself "Scoot" [Tweet him] pictured right, who has a conspiracy theory about the War on Christmas. Scoot (Scott Paisant in real life) says it isn't really happening, and we made it up.  In Scoot: Is the “War on Christmas” a conspiracy theory? he recycles old attacks on VDARE.com and its Editor Peter Brimelow by the Daily Beast's Max Blumenthal, the $PLC, and others into a farrago of nonsense.

What “Scoot” exemplifies is the Telephone Game, which has been described as "The game where you sit in a circle and the first person whispers a phrase in the ear of the person next to him, until the phrase reaches the last person. When the phrase is spoken out loud by the last person, you find out that it’s altered in a very unexpected way. "

When Peter Brimelow was growing up in England, this same game was known, no doubt Deplorably, as  "Chinese Whispers", and that's what the Wikipedia article on it is called. The point is that they pass these things around without ever checking them, and get them wrong.

So here's what Scoot has to say:

The bigger question is whether the “War on Christmas” is real or an agenda-inspired myth?

Bill O’Reilly, when he was on the Fox News Channel, was credited with regenerating the “War on Christmas” in 2004 and went so far as to declare it a national emergency. But the alleged “War on Christmas” actually dates back to the early 1920s.

Wrong. In fact, there was a big kerfuffle about Christmas carols in New York City schools back in 1906. Our longtime War On Christmas chronicler  Tom Piatak wrote here in 2005 that there was  "a walkout of 20,000 Jewish students from the New York City public schools in 1906 to protest the singing of Christmas carols [This Season's War Cry: Commercialize Christmas, or Else, By Adam Cohen, NYT, December 4, 2005]. Thus the War on Christmas was not made up by Henry Ford, as Scoot suggests below. In 1955 National Review editorialized about the War On Christmas in the New York Schools as well.[Krismas, PDF, November 26, 1955].

But what Henry Ford or his ghostwriter actually said was that it was difficult to find "Christmas cards that indicated in any way that Christmas commemorated Someone’s Birth" i.e.. lots of Santas, but no Jesuses.

We're not responsible for the fact that Henry Ford Noticed this, and using Ford as a stick to beat Christmas with is common. But in Telephone Game terms, you can see that “Scoot” has not only failed to check the original Ford quote, but he hasn't even understood the quote as reproduced by, say, Daniel Denvir in Politico [ A Short History of the War on Christmas , December 16, 2013] or by Snopes.[A History of the ‘War on Christmas’, by David Emery, November 29, 2017]

In 1995, the renewed “War on Christmas” came from author Peter Brimelow’s work: “Alien Nation: Common Sense About America’s Immigration Disaster.” Brimelow’s writings are considered a modern restart to the white supremacy movement of today. The fear of immigrants changing America was the foundation for instilling fear that pandering to immigrants would include ending the celebration of Christmas, as we know it.

Brimelow, of course, is delighted that “Scoot” acknowledges he pre-dated O’Reilly. Otherwise, this is really, stupid. The word “Christmas” appears only twice in Alien Nation, once recommending the book Albion's Seed as a Christmas present, once in the Afterword, which is dated "Christmas, 1995." There is no mention of the “War On Christmas.”

But Brimelow did get National Review Editor John O'Sullivan to start a competition to find the most outrageous example of the War On Christmas in the December 27, 1995 National Review. The competition was dropped, along (not coincidentally) with opposition to immigration after O’Sullivan was fired. Brimelow relaunched the competition when he started VDARE.com (20th anniversary this year!) as he explained in his history of the War On Christmas here.

Contrary to “Scoot,” there is not actually such a thing as a "white supremacy movement of today"—that is a conspiracy theory (unless by “white supremacy” he means “American patriotism”). 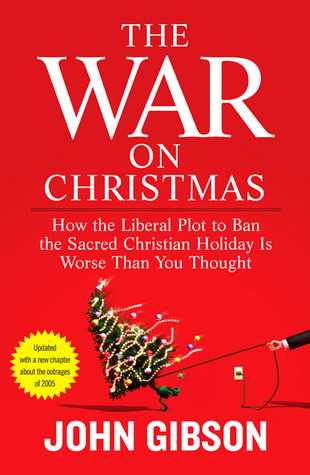 In 2005, Fox News contributor John Gibson followed Bill O’Reilly’s lead with his book: “The War on Christmas: How the Liberal Plot to Ban the Sacred Christian Holiday Is Worse than You Think.”

By 2006, O’Reilly declared that Fox News and conservatives had won the “War on Christmas,” but that didn’t stop O’Reilly from using the idea that there was a “War on Christmas” as recently as 2016. I suggest that is proof that Bill O’Reilly’s installation [sic] of fear over losing Christian beliefs was simply a publicity stunt designed to rally the base of the Fox News Channel’s audience.

I'm not going to argue about what O'Reilly said because I don't know if that's what he did say, see “Scoot’s” account of Ford above, and note the total lack of citations.

During his 2016 presidential campaign, Donald Trump used the phrase “we’re saying Merry Christmas again” as a campaign promise to restore the right to say, “Merry Christmas,” which had never been taken away. Trump has repeated the phrase since becoming President.

We noted Trump’s War On Christmas acknowledgement on the campaign trail in 2016, and we also Noticed various failures to acknowledge Christmas by the three previous Presidents Clinton, Bush, and Obama, all nominal Christians. And Trump was savagely attacked for supporting Christmas. [ Donald Trump's "Merry Christmas" Has Nothing to Do With Christmas, by Elizabeth Bruenig, New Republic, September 25, 2015].

Of course, Trump, a New Yorker, is very familiar with the War On Christmas, because New York is Ground Zero in that war, and has been (see above) since at least 1906,

In fact, the whole Happy Holidays thing in commerce is based sometimes on  fear of complaints, and sometimes on the personal feelings of the retailers, rather than a decision to maximize profits. Christmas is intensely important to retailers, and they're crazy to disrespect it but they increasingly do. See my article From ANIMAL FARM To AMERICAN SNIPER—Cultural Marxist Capitalists Leave Billions On The Table, But There’s Hope For American Culture Yet, for the very similar case of what Hollywood has done to itself.

There was a time when Christmas was actually banned in America by Christians in 1659. Puritans of the Massachusetts Bay Colony outlawed Christmas because the gluttony and gift-giving were seen as ungodly. Years later, the ban on Christmas was lifted and Christmas has never been banned since then.

I always get annoyed by this. The Puritans, who were all Christians, banned the observance of Christmas for religious reasons, out of respect for Christianity and the Bible, rather than Christophobia. It was never banned in the other colonies.

As Americans, we have the responsibility of sifting through an overabundance of information we are exposed to minute-by-minute, and that responsibility includes not falling for attempts to disguise real concerns in rhetoric to benefit an agenda. And that’s what the “War on Christmas” was and still is today—rhetoric to rally support for an agenda.

I do understand the idea that religious symbols have no place on property owned by the government as implied by the First Amendment; [Emphasis added]however, as a Christian, I don’t understand why we all can’t be more tolerant of each other’s religious beliefs and allow both Christmas symbols and other religious symbols during holiday seasons.

What “Scoot” talking about here is banning all Christmas displays on anything that can be called government property. This not only means schools, town halls, courthouses, parks, airports, et cetera, but has been held to include streets.[Keister v. Bell 879 F.3d 1282, Jan 23, 2018] So “Scoot” thinks that there's no War on Christmas if you can have a Nativity display in your own home.

To support the idea that there is a “War on Christmas” in America is to say that individuals and families have lost their right to put Nativity scenes, or any Christian symbols, on their property and that Americans have been forced to curtail their Christian recognition of Christmas in their homes and private lives.

So, according to “Scoot,” your employer can ban saying Merry Christmas, your town can ban Nativity scenes, and change the name of hundred-year old Christmas plays and pageants—but there's no War On Christmas!

When I read things like this, I remember what Lawyer Jordan Lorence of the Alliance Defending Freedom, who had been fighting the War On Christmas on the side of the angels since the Reagan Administration, wrote about War On Christmas Denial (which is what “Scoot” is engaging in here) 2011.

It was called Heathens Greetings: What the Supposedly Nonexistent “War on Christmas” Really Is and Is Not, December 28, 2010.

I blogged on it under the heading “I Feel Like Neil Armstrong Listening To Someone Argue That NASA Faked My Apollo Moon Landing!”.

James Fulford has been a writer and editor for VDARE.com since winning the Christmas Competition in the in year 2000. Email him with War on Christmas stories.