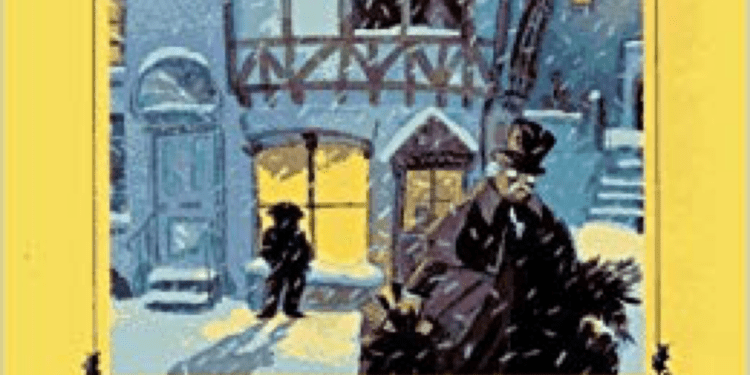 The Shop Of Ghosts

Did I ever tell you readers how I got this job? No? Well gather round, and I'll tell you.

In the year 2000, which some say was part of the last century, I was reading Vdare.com, and I saw the world famous Vdare.com Christmas competition.

I hunted around systematically for egregious examples, and won!

And not only did I win, but Brimelow offered me a job, including actual money, which I needed at the time. Financially I was where Tiny Tim was, in A Christmas Carol. Now, more like Bob Cratchit. [Help Keep VDare.com Going!!]

One of the things that I submitted for my winning entry was this story, the The Shop Of Ghosts by G. K. Chesterton.

Since it was too long to publish on the main page, Peter Brimelow summed it up like this: VDARE summary of Chesterton: Christmas is dying – and will never die.

Read the whole thing below:

The Shop Of Ghosts

The Shop Of Ghosts first appeared in London's Daily News. It was later collected into the book of essays Tremendous Trifles.

Nearly all the best and most precious things in the universe you can get for a halfpenny. I make an exception, of course, of the sun, the moon, the earth, people, stars, thunderstorms, and such trifles. You can get them for nothing. Also I make an exception of another thing, which I am not allowed to mention in this paper, and of which the lowest price is a penny halfpenny. But the general principle will be at once apparent. In the street behind me, for instance, you can now get a ride on an electric tram for a halfpenny. To be on an electric tram is to be on a flying castle in a fairy tale. You can get quite a large number of brightly coloured sweets for a halfpenny. Also you can get the chance of reading this article for a halfpenny; along, of course, with other and irrelevant matter.

But if you want to see what a vast and bewildering array of valuable things you can get at a halfpenny each you should do as I was doing last night. I was gluing my nose against the glass of a very small and dimly lit toy shop in one of the greyest and leanest of the streets of Battersea. But dim as was that square of light, it was filled (as a child once said to me) with all the colours God ever made. Those toys of the poor were like the children who buy them; they were all dirty; but they were all bright. For my part, I think brightness more important than cleanliness; since the first is of the soul, and the second of the body. You must excuse me; I am a democrat; I know I am out of fashion in the modern world.

As I looked at that palace of pigmy wonders, at small green omnibuses, at small blue elephants, at small black dolls, and small red Noah's arks, I must have fallen into some sort of unnatural trance. That lit shop-window became like the brilliantly lit stage when one is watching some highly coloured comedy. I forgot the grey houses and the grimy people behind me as one forgets the dark galleries and the dim crowds at a theatre. It seemed as if the little objects behind the glass were small, not because they were toys, but because they were objects far away. The green omnibus was really a green omnibus, a green Bayswater omnibus, passing across some huge desert on its ordinary way to Bayswater. The blue elephant was no longer blue with paint; he was blue with distance. The black doll was really a negro relieved against passionate tropic foliage in the land where every weed is flaming and only man is black. The red Noah's ark was really the enormous ship of earthly salvation riding on the rain-swollen sea, red in the first morning of hope.

Every one, I suppose, knows such stunning instants of abstraction, such brilliant blanks in the mind. In such moments one can see the face of one's own best friend as an unmeaning pattern of spectacles or moustaches. They are commonly marked by the two signs of the slowness of their growth and the suddenness of their termination. The return to real thinking is often as abrupt as bumping into a man. Very often indeed (in my case) it is bumping into a man. But in any case the awakening is always emphatic and, generally speaking, it is always complete. Now, in this case, I did come back with a shock of sanity to the consciousness that I was, after all, only staring into a dingy little toy-shop; but in some strange way the mental cure did not seem to be final. There was still in my mind an unmanageable something that told me that I had strayed into some odd atmosphere, or that I had already done some odd thing. I felt as if I had worked a miracle or committed a sin. It was as if I had at any rate, stepped across some border in the soul.

To shake off this dangerous and dreamy sense I went into the shop and tried to buy wooden soldiers. The man in the shop was very old and broken, with confused white hair covering his head and half his face, hair so startlingly white that it looked almost artificial. Yet though he was senile and even sick, there was nothing of suffering in his eyes; he looked rather as if he were gradually falling asleep in a not unkindly decay. He gave me the wooden soldiers, but when I put down the money he did not at first seem to see it; then he blinked at it feebly, and then he pushed it feebly away.

"Not taking money," I replied, "seems to me more like an uncommonly new fashion than an old one."

"I never have," said the old man, blinking and blowing his nose; "I've always given presents. I'm too old to stop."

"Good heavens!" I said. "What can you mean? Why, you might be Father Christmas."

"I am Father Christmas," he said apologetically, and blew his nose again.

The lamps could not have been lighted yet in the street outside. At any rate, I could see nothing against the darkness but the shining shop-window. There were no sounds of steps or voices in the street; I might have strayed into some new and sunless world. But something had cut the chords of common sense, and I could not feel even surprise except sleepily. Something made me say, "You look ill, Father Christmas."

I did not speak, and it was he who spoke again.

"All the new people have left my shop. I cannot understand it. They seem to object to me on such curious and inconsistent sort of grounds, these scientific men, and these innovators. They say that I give people superstitions and make them too visionary; they say I give people sausages and make them too coarse. They say my heavenly parts are too heavenly; they say my earthly parts are too earthly; I don't know what they want, I'm sure. How can heavenly things be too heavenly, or earthly things too earthly? How can one be too good, or too jolly? I don't understand. But I understand one thing well enough. These modern people are living and I am dead."

"You may be dead," I replied. "You ought to know. But as for what they are doing, do not call it living."

A silence fell suddenly between us which I somehow expected to be unbroken. But it had not fallen for more than a few seconds when, in the utter stillness, I distinctly heard a very rapid step coming nearer and nearer along the street. The next moment a figure flung itself into the shop and stood framed in the doorway. He wore a large white hat tilted back as if in impatience; he had tight black old-fashioned pantaloons, a gaudy old-fashioned stock and waistcoat, and an old fantastic coat. He had large, wide-open, luminous eyes like those of an arresting actor; he had a pale, nervous face, and a fringe of beard. He took in the shop and the old man in a look that seemed literally a flash and uttered the exclamation of a man utterly staggered.

"I'm not dead yet, Mr. Dickens," said the old gentleman, with a feeble smile; "but I'm dying," he hastened to add reassuringly.

"But, dash it all, you were dying in my time," said Mr. Charles Dickens with animation; "and you don't look a day older."

"I've felt like this for a long time," said Father Christmas.

Mr. Dickens turned his back and put his head out of the door into the darkness.

Another shadow darkened the doorway, and a much larger and more full-blooded gentleman in an enormous periwig came in, fanning his flushed face with a military hat of the cut of Queen Anne. He carried his head well back like a soldier, and his hot face had even a look of arrogance, which was suddenly contradicted by his eyes, which were literally as humble as a dog's. His sword made a great clatter, as if the shop were too small for it.

"Indeed," said Sir Richard Steele, "'tis a most prodigious matter, for the man was dying when I wrote about Sir Roger de Coverley and his Christmas Day."

My senses were growing dimmer and the room darker. It seemed to be filled with newcomers.

"It hath ever been understood," said a burly man, who carried his head humorously and obstinately a little on one side (I think he was Ben Jonson) "It hath ever been understood, consule Jacobo, under our King James and her late Majesty, that such good and hearty customs were fallen sick, and like to pass from the world. This grey beard most surely was no lustier when I knew him than now."

And I also thought I heard a green-clad man, like Robin Hood, say in some mixed Norman French, "But I saw the man dying."

"I have felt like this a long time," said Father Christmas, in his feeble way again.

Mr. Charles Dickens suddenly leant across to him.

"Yes," said the old man, and sank shaking into a chair. "I have been always dying."

Mr. Dickens took off his hat with a flourish like a man calling a mob to rise.

"I understand it now," he cried, "you will never die."