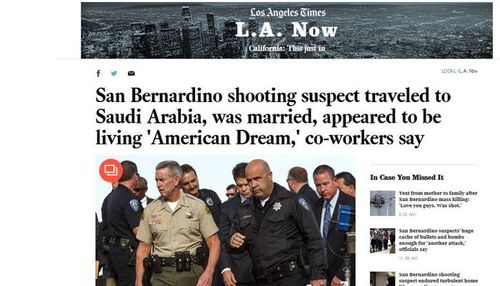 As the holiday gathering got underway Wednesday morning, Syed Farook joined dozens of his colleagues from San Bernardino County’s Public Health Department. Farook seemed quiet during the early hours of the event, then vanished just as a group photo was about to be taken.

Shorty afterward, gunfire erupted at the Inland Regional Center where the employees filled a conference room.

By the end of the day, police had identified Syed Farook, 28, as a suspect in the massacre and said he was one of two people shot to death in a gun battle with officers. The other was 27-year-old Tafsheen Malik, who a family member said was Farook’s wife.

Police officials said Farook had worked for the county for five years. San Bernardino Police Chief Jarrod Burguan said that there were reports of a dispute before Farook left the party.

Co-workers told The Times that they were shocked to hear Farook’s name linked to the shooting. Two health department employees who were in the bathroom when the bullets began to fly said Farook was quiet and polite, with no obvious grudges.

They said Farook had traveled to Saudi Arabia and returned with a new wife he met online. The couple had a baby and appeared to be “living the American dream,” said Patrick Baccari, a fellow inspector who shared a cubicle with Farook.

The phrase “American dream” is turning into the new “vibrant.” It’s become a sign for: uh-oh, here comes trouble …

… Reisinger said she heard that the office had recently held a baby shower for Farook and that he had taken paternity leave.

It’s bizarre that a young mother would participate in this. Post-partum mental illness?

Suspect Was Born and Raised in U.S., Official Says

Thus the constant assurances in the press that a new wave of refugees will fit right in, when history and human nature ought to tell us the real worry is their descendants, who are likely to grow up confident enough in their surroundings to wish to take over. (Islam is an ideology that is especially explicit about its desire to bring more territory under submission.)