The three stories pictured above were the first results on a recent War On Christmas Google news search—the Washington Post highlighting a story about Pope Francis saying singing Christmas carols, et cetera, won’t bring about world peace; Salon gloating about how some corporate weasel at Fox News sent out a “Happy Holidays” card, and Brent Bozell at the conservative Media Research Center pointing out that there are Muslims—in Germany, America and elsewhere—who actually hate Christmas more than Salon does. (Or are braver than the Salon-ites—not a high bar.)

In the Washington Post, a left-wing Catholic is using something Pope Francis said in 2015 to bash Trump, and put down people who want to fight back against suppression of Christmas in the public square:

[T]he troublemaker Pope Francis told a group of us gathered for Mass in 2015. “Christmas is approaching: There will be lights, parties, lighted Christmas trees and manger scenes. … It’s all a charade.”

Why would the pope wage war on Christmas? “The world continues to go to war. The world has not chosen a peaceful path. There are wars today everywhere, and hate,” Francis said. “We should ask for the grace to weep for this world, which does not recognize the path to peace. To weep for those who live for war and have the cynicism to deny it. God weeps; Jesus weeps.”

Pope Francis is waging a war on Christmas. Christians should join him.

Donald Trump's version of Christmas has nothing to do with Christ.

Christopher Jolly Hale is not an in-joke pseudonym. Here’s his bio:

Christopher Hale, a columnist for TIME on faith, is the executive director of Catholics in Alliance for the Common Good [VDARE.com note: Pro-LGBT, pro-illegal alien,pro-"Racial Justice"]  and the co-founder of Millennial. He helped lead national Catholic outreach for President Obama's 2012 re-election.

There’s nothing surprising about a man like Hale [Tweet/ email him] saying Trump isn’t really a Christian; the Pope himself said something like it—and had to apologize. (Trump is a Presbyterian, by the way, which makes this especially offensive, by the normal rules of American politics—remember when Conservatism, Inc didn't want us to talk about Romney's religion?)

But while saying who is and isn’t a Christian isn’t something I am in the business of doing, I’d say that if the Washington Post is giving you op-ed space to use your religion to attack (a) Donald Trump, and (b) Christmas, you should examine your conscience.

Salon is using what appears to be a “Happy Holidays” card from Fox’s corporate communications department to continue its regular “War On Christmas” hate. What’s interesting is that it wants to use Fairleigh Dickinson professor Dan Cassino’s Harvard Business  Review article (debunked here and here) to bash Trump and us: 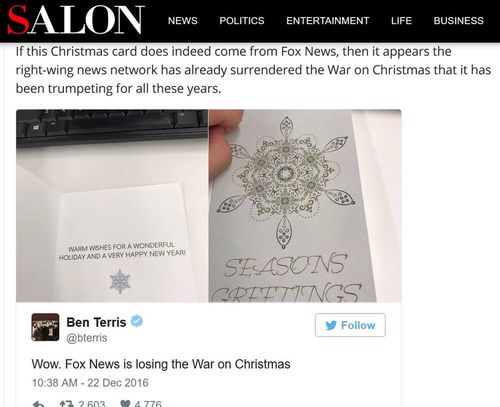 “The term [War on Christmas] arose in the writings of anti-immigration activist Peter Brimelow in 1999 but languished until October 2005, when John Gibson appeared on The O’Reilly Factor to discuss his new book, The War on Christmas: How the Liberal Plot to Ban the Sacred Christian Holiday Is Worse Than You Thought,” writes the Harvard Business Review. “The thrust of the argument made by Brimelow and Gibson is that governments and large corporations are actively pushing an anti-Christian agenda.”

Among the proofs of a War on Christmas cited by Brimelow (who is also an active white nationalist), Gibson, Bill O’Reilly, and other Fox News talking heads is the secularization of the Christmas holiday and the substitution of the Christian-specific “Merry Christmas” with more generic expressions like — well, like “Seasons’ Greetings” and “Happy Holidays.”

Did Fox News just admit defeat in the War on Christmas? | This corporate greeting card suggests a disconnect between the network's pundits and communications department,  By Matthew Rozsa, December 24, 2016 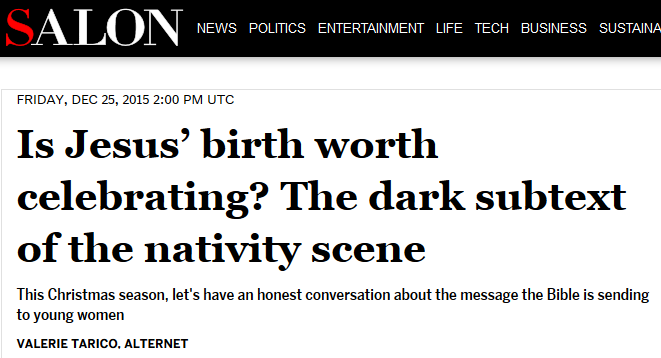 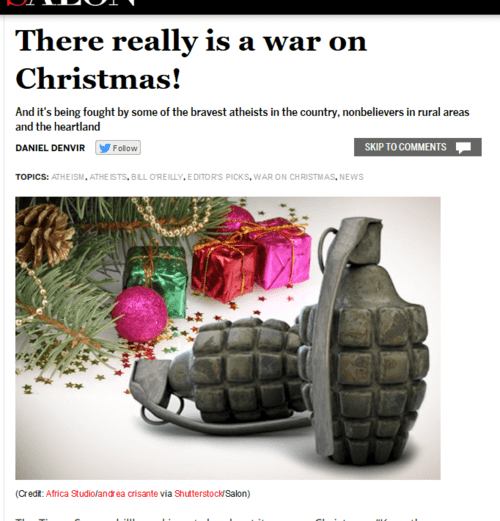 “War On Christmas myth” is good, coming from Salon—when it’s not saying the War On Christmas  a complete myth, it’s publishing some of the most vicious anti-Christian, anti Christmas writing out there.

Take a look at these two pictures (click for details) for an idea. You should know that Salon has been declared a Hate Group (by me). I think I have more evidence for that than the SPLC has for its fatwas.

Finally, from the Media Research Center:

2016 hasn’t been a hot year for discussions of a rhetorical “war on Christmas” in our malls or public schools. Maybe we've tuned out the secular hostility in our culture. We've gone from banning Linus reading from the Gospel of Luke to banning Christmas to banning Santa Claus and now to banning even the thought of a holiday since for others it might not be. 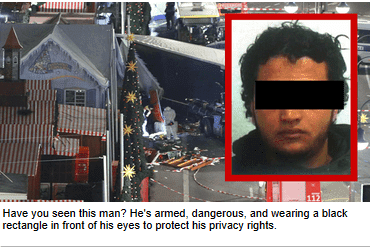 But the deadly truck attack on a Christmas market in Berlin gives the phrase “war on Christmas” much more gravity and serves as the latest reminder that the secular media in what used to be called “Western civilization” has shown far too little concern for violent attacks on Christianity, the faith that created Western civilization. This newsroom yawn is inexcusable.

The problem experienced by the media is this—Christophobia, as felt by both Muslim mass murderers, and Salon’s Hate Group pundits, is a prejudice that lacks a name.

But if a Muslim truck driver smashes up Christians at Christmas Market, they don’t know what to call it.

But we do, and we plan to be here next Christmas—with your support—to keep saying so.