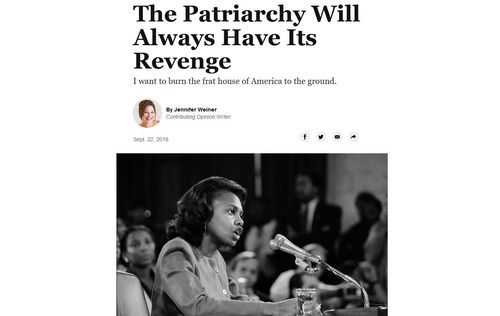 Jennifer Weiner: "I Want to Burn the Frat House of America to the Ground."

The Patriarchy Will Always Have Its Revenge

I want to burn the frat house of America to the ground.

I’m pretty low-key about violent metaphors, but I think the NYT should have blue-penciled this call for arson. Nobody remembers, but Sabrina Rubin Erdely’s UVA rape hoax story led to a leftist mob smashing the windows of a UVA fraternity on 11/20/2014. Somebody easily could have been blinded. The next level of escalation would be fire, which can kill dozens.

Most of the fraternity houses I’ve seen are old wooden buildings that look like they’d go up in flames spectacularly. There really are firebugs out there and they don’t need encouragement from the New York Times.

… I’m beyond angry. As the spectacle of Judge Kavanaugh’s nomination unfolds, I find myself caught in the undertow of bad memories, stuck in a simmer of rage. My hands furl into fists. My jaw clenches. My teeth grind in the night. I send my daughters out into the world each day, with a wave and a smile, and then I come inside and want to cry out of fury and frustration, because the world has not changed fast enough. It’s one thing to say #MeToo, but if I find out it’s them, too, I can picture myself hunting down the man who hurt them and dismembering him with my fingernails and burning the whole world down.

When Clarence Thomas won his seat, I felt like someone had taken an eraser to the core of my being, and had rubbed a bit of me away. …

“If you poison us, do we not die?” The Jewish moneylender Shylock asked in “The Merchant of Venice,” inquiring whether his humanity matched that of his Christian clients. “And if you wrong us, shall we not revenge?”

Jennifer Weiner is the author, most recently, of the memoir “Hungry Heart” and a contributing opinion writer.

So far as I can tell, this is not another Titania McGrath prank.
[Comment at Unz.com]