The Audacious Epigone points out what a remarkably thorough job this Tennessee church shooting does of carpet-bombing the Social Justice Narrative.

The Nashville church shooting by a man named Emanuel Samson is obliterating The Narrative from every angle. It is the inverse of everything that the Dylann Roof shooting in Charleston in 2015 — that provided cover to launch The Great Erasure against the American confederacy — was.

• He is from Sudan, one of the countries included in Trump's initial travel ban. That ban, propitiously enough, expired today, on the very day of the shooting. The new ban added Chad, North Korea, and Venezuela but dropped Sudan. Maybe we put Sudan (both of them) back on the list, Mr. President?

• His Facebook cover photo shows a black man taking a knee. The man turns out to be the shooter himself in the gym, but it was presumably cropped to show support for the kneelers (his feed is full of pictures of himself striking muscular poses, so it's not implausible that steroids or some other enhancers played a role). 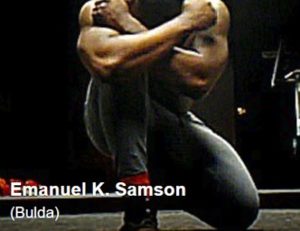 • Samson's murder spree is cut short by someone running to his vehicle to grab his gun and then exercise his Second Amendment right to hold Samson down until police arrived.

• He refers to Africa as "the Mother Land" (imagine if Roof had referred to Germany as "The Fatherland").

• He shared this colorful clip exhorting blacks to raise young warriors to prepare for the coming fight for independence.

• He supports all white-owned land in South Africa being seized reclaimed from whites and given returned to blacks.

You get the idea.

Who? Whom? dictates that, far from spurring any sort of national movement against black-on-white violence, this incident will be flushed down the memory hole by week's end.

The only point of Social Justice dogma that didn't take a hit is feminism, although since both the shooter and the hero usher who apprehended him are male, the story is at least feminism-neutral — no direct hit, but also no "You Go, Girl!" element.

Audacious is undoubtedly right, though, that nobody will be calling on us to have a "national conversation" about the Nashville shooting.  That's not who we are!