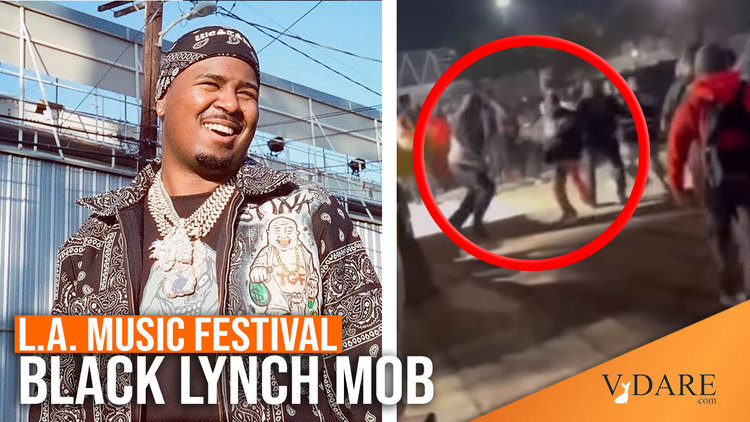 It’s Black History Month! Or as Sam Francis put it once, the month “previously known as 'February'" is beginning, and one of the things we’re going to hear about is the history of lynching in America, because to the antiquarians in the MSM “it's always Clarksdale, Mississippi in 1965.”

You will read that there have been no lynchings in the United States since 1964, according to historical tables from the Tuskegee Institute. But I’m afraid that only applies to lynchings committed by whites.

Let’s take the recent case of a death of a black man by mob violence—committed by other blacks.

Drakeo the Ruler (real name Darrell Caldwell) was not an "aspiring rapper," he was an actual professional rapper who made a living at it—when he wasn't in jail for shooting people.  He was stabbed to death on December 19, 2021, as a result of mob violence at a rap festival in Los Angeles:

Update, Thursday, January 27 at 11:00 p.m.: Deadline reported Thursday night that the family of the late Drakeo the Ruler (real name Darrell Caldwell) intends to file a wrongful-death lawsuit against Live Nation, Bobby Dee Presents, and C3 Presents. Caldwell was stabbed to death at Once Upon a Time Festival in Los Angeles, where he was scheduled to perform in December. Attorney for the family, James Bryant told the Los Angeles Times that “Mr. Caldwell was essentially lynched by over 40 to 60 people, and as you also saw, Mr. Caldwell had no security,” referring to a video of the crowds attacking Caldwell. Bryant also claimed the lawsuit would be filed next week, seeking upward of $20 million from concert promoters.

We have some video:

Note that this is not a white lynch mob. It was, as Rolling Stone’s Nancy Dillon wrote in December

a large influx of [black] people [who] arrived around the same time as fellow rapper YG.

Dillon is not saying that they were a mob led by, loyal to, or paid by this other rapper YG—who’s had his own legal troubles—she’s just mentioning it.

But Drakeo's mother Darrylene Corniel seems pretty clear that it wasn't random mob violence, but intentional mob violence, which is what gets people, even black people charged with lynching:

“They said there were, like, 40 to 60 people,” Corniel told Rolling Stone. Members of the incoming crowd “swamped” her sons and their small entourage, she said. “Everything just happened so quickly,” she said. “They started trying to jump them.”

She said Devonte tried to protect his brother: “He was trying to fight, but when he turned around, he could see his brother with blood gushing out of him. He was like, ‘Did they stab you?’ It was like, there were so many of them.”

She believes pride played a role in the tragedy, but she was still awaiting her formal interview with investigators to get more information. “It is such a shame how much jealousy and envy can make people stoop to such low tactics to try to destroy another individual because of fame and progress,” she said. “When you start getting up there, people start getting intimidated. So, I believe, once his platform started going higher, people started getting upset.”

She said aside from the killer’s motive, it’s clear venue security failed at its job.

EXCLUSIVE: Drakeo the Ruler’s Mom Says She Plans to Sue Over His Killing. ‘I Want Justice for My Son,’ December 20, 2021

I don't know if YG is responsible in any of this or if the police are ever going to get the guy who did the actual stabbing. But it's obvious that the suit against concert promoters rather than the mob is based on the fact that concert promoters might actually be able to pay a $20 million judgment.

My point: in the modern world, not 1958 or something, lynch mob activity is almost always a minority thing—either mob attacks on whites, or on each other.

The “car crash lynching” phenomenon I refer to is this: if someone’s car kills someone in a black neighborhood, the local community will spontaneously try to beat them to death. Sometimes they succeed.

On an immigration-related note: old-fashioned lynching is still a problem in crime-ridden Mexico:

See also Lynchings are not new to Mexico: why does this matter?,  by Gema Kloppe-Santamaría, UC Press Blog, May 25, 2021.

This can surprise them:

From the time his son was old enough to understand, Kamau Marcharia has been telling him the story of an ancestor who was tied to the bumper of a Model T Ford and dragged to his death.

Like it or not, lynching is part of any black Southerner's heritage.

But Marcharia was not prepared for the call that came three years ago when his son and three other black boys got into a fight with a white boy at middle school and were summoned to court -- to answer charges of lynching.

"I didn't even know there was a law like that," the veteran civil rights activist says. "I was outraged. See, a 13-year-old fighting because somebody either pushed him or punched him is not lynching…

"When I hear that term, psychologically I cannot get that out of my mind, the picture of some horrible event."

But maybe if Marcharia hadn't "carefully taught" his son to hate whites, the son wouldn't have been involved in a four-on-one attack on a white boy. While he makes it sound like it was a mere scuffle, here's what such attacks can look like in real life: 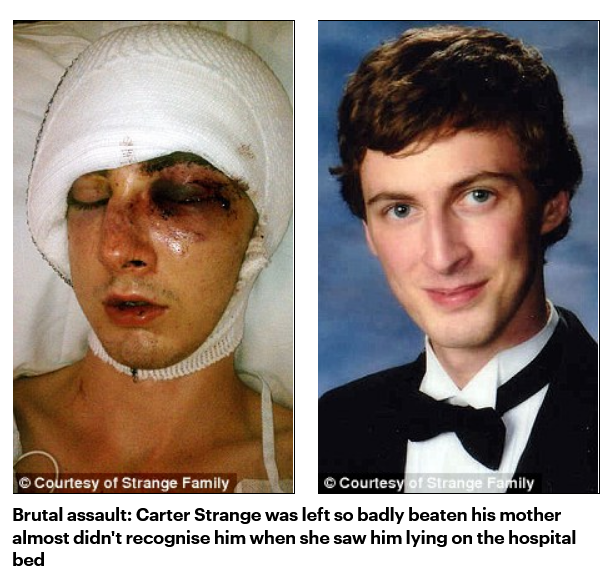 And here's one of the lynchers, pictured because he was old enough to be considered an adult—some of the others in the mob attack are as young as Kamau Marcharia's kid. 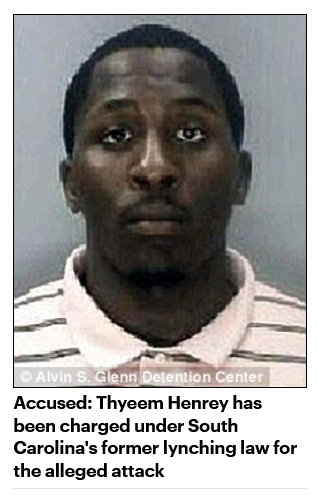 South Carolina, as the Washington Post’s Breed reported above, passed its anti-lynching law in the fifties in response to the national publicity [Opera in Greenville, by Rebecca West, New Yorker Magazine, June 6, 1947] that surrounded the lynching of black murderer Willie Earle for the stabbing of white taxi driver Thomas W. Brown. 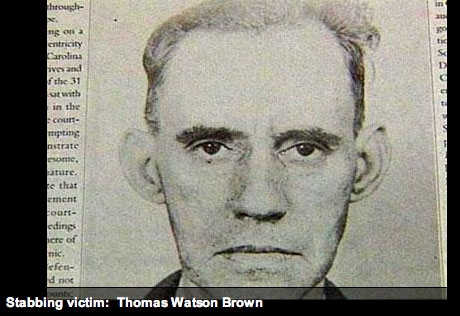 There would have no national publicity about the murder of a white man by a black man without the lynching—such crimes were and are commonplace. But the fact that the murderer was subsequently executed by concerted mob violence, and local white juries failed to convict (despite vigorous prosecution by then-Governor Strom Thurmond), was what caused the law to be passed.

However, there are people in South Carolina who now feel that this law has “disparate impact”—that is, there are more blacks than whites charged under these laws, which is, as the then chief of police of Charleston, SC, who was black himself, pointed out to the Washington Post, was true of ALL crimes.

They also feel that the term “lynching“ is somehow sacred, and using it for black mobs beating someone only half to death is sacrilege. WaPo’s Breed reports:

But Marcharia says the law as it has come to be used in South Carolina is an affront to blacks.

"That law was passed, in my judgment, to make sure that African Americans, two generations from now or two decades from now, will lose the memory of their history, what happened to them," said Marcharia, whose full name is Swahili for "black warrior." "That kids born in that period of time will see lynching as a fistfight, when we know that lynching is murder and killing, burning people and evil."

But as VDARE.com readers know, “murder and killing and burning people and evil” are today much more the province of black people than white, as months of nationwide riots, a huge uptick in murders, and the regular atrocities reported here every month by Kenn Gividen show.

Willie Earle was lynched on February 17, 1947, which is even before Peter Brimelow was born.

So let’s stop talking about antiquarian lynchings that happened before most people were born, and turn the conversation towards black violence.