A Southern Maryland Reader Learns, From The DAILY MAIL, What The American MSM Never Told Him About The Washington Snipers

Re: Michelle Malkin's The Lesson Of Lee Malvo's Fingerprint, November 26, 2002

From: A Southern Maryland Reader [Email him]

Unearthed: The secret behind America's most terrifying killing spree. Seventeen innocents were seemingly slaughtered at random... but a major documentary series uncovers the real motive of the shootings that shocked the world 20 years ago

It concerns the Washington D.C. Beltway snipers of 2002. I live and work in southern Maryland, far outside the Beltway, but the Washington TV stations are my "local" stations. I don't watch them anymore but I did in 2002. I remember well the black police chief of Montgomery County hunting for the lone white man, because serial killing is something only deranged white men do, in a white SUV. The local TV news showed white men driving white vehicles being routinely stopped and searched along the Beltway and elsewhere.

In every case the white men willingly waived their constitutional rights because everyone felt catching the sniper was the most important thing. It was a shock when the lone white man turned out to be two black men and the white SUV a blue Chevy Caprice. I remember at the time learning that the older man was a former U.S. soldier. I do not recall hearing about him being involved with Nation of Islam or the pair being homosexual lovers. That's new to me.

Of special interest to VDARE.com is the immigration angle. I knew the younger man, Lee Boyd Malvo,  was an immigrant (from Jamaica). I did not know that the pair could have been identified a month earlier and before they arrived in the D.C. area if the fingerprint search conducted on evidence collected after a shooting in Alabama had been run through the "immigration database" rather than just "the entire country." Here are the relevant excerpts from the Daily Mail article:

Over the next few months, the snipers travelled around the country killing and wounding random strangers. But, on September 21, they made their first mistake. After firing at two women walking to their cars from Krystal's off-licence in Montgomery, Alabama, they fled the scene - but Malvo had left behind vital evidence.

'It turned out to be the owner's manual for the Bushmaster rifle,' says Montgomery detective Mike Myrick. 'It had 36 fingerprints of identifiable quality. The fingerprints were run through the entire country, it did not strike anyone. It was very frustrating.'

Eleven days later, on October 2, the snipers arrived in the capital, beginning their reign of terror in suburban Montgomery County on the edge of Washington DC.

Finally, on October 23, the police operation made a breakthrough.

During one call to the police, Malvo - in order to prove he was one of the snipers - tipped them off about the shooting of the two women at Krystal's off-licence, not realising that they had his fingerprint-laden gun manual.

After matching the ballistics from the Washington shootings to the Alabama attack, the police ran the fingerprints against the immigration database and came up with a match.

Question: In 2022, twenty years later, is the immigration database included in fingerprint searches for evidence collected after shootings? 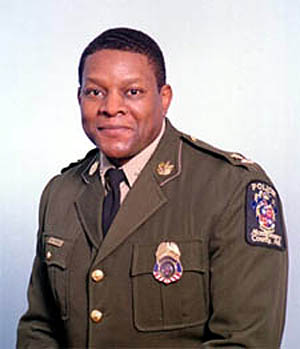 James Fulford writes: Urban police chiefs (like former DC Police Chief Moose, who was black) are almost fanatical about not cooperating with immigration authorities. All this was reported on VDARE.com at the time, mostly by Michelle Malkin, who covered the immigration aspects, the Muslim aspect, and the lameness of the late Charles Moose.