In 2019, a black male nurse, a Haitian immigrant, was found to have raped and impregnated a "non-verbal woman in a vegetative state" in Arizona. It was an interracial rape, and the only reason we know that is the victim being cared for was a member of the San Carlos Apache tribe, and the San Carlos Apache tribe is allowed to complain of the abuse of their tribal members.

He has finally been sentenced to ten years in jail:

A former Arizona nurse has been sentenced to a decade behind bars for sexually assaulting and impregnating a non-verbal woman in a vegetive state for whom he was supposed to be caring.

Nathan Dorceus Sutherland, 39, was sentenced n Thursday to 10 years of prison, 12 News in Phoenix reports. It comes three months after the former health care worker at Phoenix’s Hacienda Healthcare pleaded guilty to sexual assault and vulnerable adult abuse of a disabled care home patient; 10 years was the maximum punishment called for under his plea deal.

After his release, Sutherland will have a lifetime supervised probation and must register as a sex offender.

I did several posts on it at the time:

I also did an article on the more general problem of sexual abuse (and impregnation!) of unconscious female patients by male nurses, which is the subject of a famous scene in the movie Kill Bill.

That was probably based on the real-life 1996 case of John Horace, below. 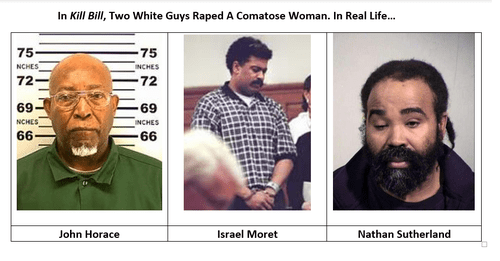 One of several cases, before and since.

Obviously, no one but me is reporting his race and national origin in headlines, and there are more cases like this:

And you thought coronavirus was bad:https://t.co/VlO50PVYxb