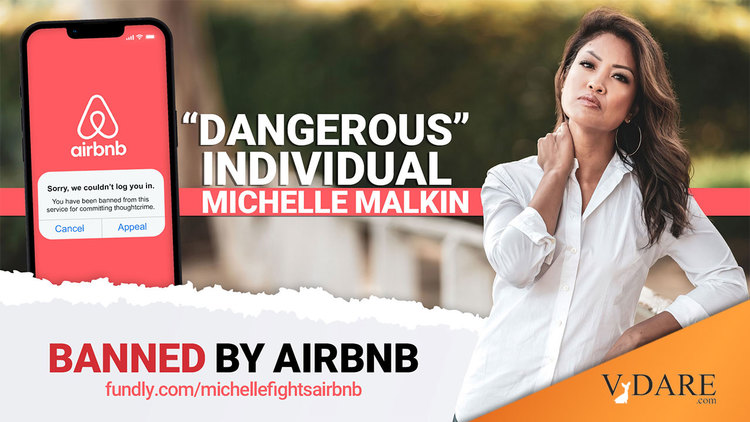 Michelle Malkin: Why Airbnb Banned Me (And My Hubby, Too!)

See, earlier VDARE.com’s Brimelow: “This Is A Communist Coup. But White America Is On The Move”

So here is the grim reality of life in Woke America 2022. In November, I spoke at a peaceful conference held by an organization that is deemed a “hate group” by the Southern Poverty Law Center and Anti-Defamation League. The title of my talk was “Race, Immigration, and Con. Inc: How I Came to See the Light.” It was a wide-ranging discussion of my three decades of reporting on the nation’s demographic and cultural deterioration—which I’ve chronicled firsthand on college campuses, at our borders, and in every crime-ridden, riot-prone, and mass migration–transformed metropolis from Los Angeles to Seattle and Portland, to Baltimore, Washington, D.C., New York, and Denver.

As I’ve done throughout my career, I lambasted both Swamp Democrats and establishment Republicans for selling us out. The speech delved into the K-20 metastasis of anti-white curriculum, the corporate media’s whitewashing of black-on-Asian attacks, and the long campaign to censor nationalist dissidents who put America first. A week after my talk, San Francisco–based Airbnb [Tweet them] notified me that I was banned from using its services ever again and imperiously deleted my account. Poof! “My name’s Cedar, and I’m with Airbnb’s Trust team,” the Nov. 24, 2021 e-mail began. “It has come to our attention that you were a keynote speaker for the 2021 American Renaissance Conference earlier this month in Tennessee. Airbnb’s community policies prohibit people who are members of or actively associate with known hate groups. Due to your promotion and participation in a known white nationalist and white supremacist conference, we have determined that we will remove your account from Airbnb. This is consistent with action we’ve taken to ban people associated with this conference in past years.” Airbnb’s ideological witch hunts have claimed an unknown number of victims since 2016 as part of a woke company initiative to root out “bias” and expel anyone deemed an “extremist” with a “dangerous organization affiliation.” Press coverage of previous purges strongly suggests that the aforementioned character assassins of the SPLC are involved through use of their far left, anti-white, anti-Right “Hatewatch” list. Ever since I wrote my first book, Invasion, in 2002, the SPLC and ADL goons have sought to stifle my voice.

But this latest salvo crosses the line. It’s not enough that I—a “woman of color” (the Left’s own descriptive label, not mine) and mother of two multiracial children—was pronounced guilty of “hate” crimes and “promotion” of “white supremacist” ideas for delivering a speech whose full content Airbnb didn’t even bother to obtain from me. The Airbnb bullies also banned my equally non-violent, non-hateful husband—who did not attend the conference and who is not a public figure or activist.

Welcome to Guilt By Secondary Association.

“As we can see that your Airbnb travels are typically reserved via your husband’s account,” Airbnb’s “Trust team” member “Cedar” told both my husband and me, “we will also proceed in removing his account.” Neither of us had ever had a negative review, complaint, or policy violation of any kind. Are my kids next? Are yours? (Surprise: No response from Airbnb to my media inquiries on how many other family members of banned conservative and nationalist Airbnb customers have been swept into their thought police dragnet.)

“Cedar” closed his/her e-mail by informing me that the only way to appeal Airbnb’s decision is “[i]f our understanding that you participated in the 2021 American Renaissance Conference is incorrect.”

Take note: You’re damned right I spoke peacefully and lawfully to the peaceful and lawful 2021 American Renaissance conference and was honored to receive a warm welcome.

I resoundingly reject the notion that condemning Black Lives Matter and Antifa terrorists constitutes “hate.” I defy the Airbnb thought police who consider my husband and me “untrustworthy” and “dangerous” threats to community safety on par with convicted felons and sex traffickers. God willing, and with my readers’ and viewers’ help, I will fight these speech-stifling bigots who think they can get away with retaliating against me and my family for my journalism and activism.

I’ve received feedback from astute lawyers who note that public accommodation businesses in California, where Airbnb is based, are subject to the Unruh Civil Rights Act—which forbids the very kind of anti-free-speech, anti-free-association, and anti-equal housing discrimination Airbnb has visited upon me and my family. Much more is at stake, of course, and there are other sound legal grounds for seeking relief.

As AmRen founder Jared Taylor told me this week: “Once again, in what used to be known as the ‘land of the free and the home of the brave,’ Big Tech is punishing people for what they say. After it gets finished with vaccine freethinkers, election skeptics, and people who think all lives matter, who’s going to be left? Democrat toadies?”

America First Foundation president and American First Political Action Conference founder Nick Fuentes, targeted by the feds, investigated by Dems, and deplatformed by a multitude of woke businesses for his peaceful political advocacy, added: “Every day the list of digital services engaged in discrimination against Patriotic Americans grows longer. Deplatforming on Airbnb marks a chilling escalation in tactics used by Big Tech to silence American conservatives.”

Cancel culture has reached a new escalation and I don’t plan on rolling over. Never have. Never will. I’ve raised hundreds of thousands of dollars for other patriots and heroes over the past thirty years. Now, I’m asking readers and viewers for help to fight my own battle—which, of course, is yours as well. Visit fundly.com/michellefightsairbnb to join the cause. It’s a time for choosing: