Community Lynchings Are on the Uptick in Mexico

We see various reports that Mexico is progressing in education and expanding its middle class, with hopes that the country might be growing out of backwards culture.

But a front-page story in the Sunday New York Times shows the bad old days of mob lynchings are still ordinary and are even increasing because of “frustration.” (Apparently frustration justifies extra-legal community executions by unhappy brown people, according to the NYTimes.) 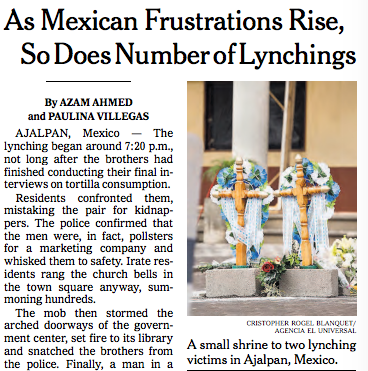 Sunday’s report reminded me of a 2007 article of cultural criticism I wrote for VDARE.com, Top Ten Reasons Why the US Should Not Marry Mexico:

In the 2001 book True Tales from Another Mexico author Sam Quinones mentioned in passing that lynching is not an unusual occurrence in Mexico, and his clippings file on extra-legal executions from 1994 until 2000 was three inches thick. One chapter in the book told the story of two salesmen whose crude behavior in the country village of Huejutla ended with townspeople lynching them in the town square with the belief that the pair were organ-snatching child kidnappers. . . .

Mexicans simply do not have the same belief as Americans that the law is central to the equitable functioning of a complex nation. It’s the Third World.

Sunday’s story was a similar scenario: two outsider businessmen arrived in a small town where they were thought to be child kidnappers, so they were killed.

Remember, Mexicans are the largest immigrant group in the United States because of our unfortunate geography.

As Frustrations With Mexico’s Government Rise, So Do Lynchings, New York Times, January 24, 2016

AJALPAN, Mexico — The lynching began around 7:20 p.m., not long after the brothers had finished conducting their final interviews on tortilla consumption.

Residents confronted them, mistaking the pair for kidnappers. The police confirmed that the men were, in fact, pollsters for a marketing company and whisked them to safety. Irate residents rang the church bells in the town square anyway, summoning hundreds.

The mob then stormed the arched doorways of the government center, set fire to its library and snatched the brothers from the police. Finally, a man in a motorcycle helmet calmly walked into the center of the frenzied crowd, doused the semiconscious brothers with gasoline and lit a match.

A grisly cellphone video of the episode played for days on local news media last fall, eliciting condemnation and hand-wringing. Officials blamed the crowd and rumors that kidnappers were taking children off the streets. One local official suggested that it was the opposition party making trouble.

But the people of Ajalpan had another explanation: Tired of government corruption and indifference, the mob fashioned its own justice, part of a longstanding problem that Mexican officials say is on the rise.

The killings raise difficult questions for Mexico, highlighting an alarming development: By some accounts, there were more public lynchings this past year than at any other time in more than a quarter-century. There were at least 78 lynchings last year in Mexico, more than double the number the previous year, according to data collected by Raúl Rodríguez Guillén, a professor and an author of the book “Mexico Lynchings, 1988-2014.”

The mob actions were born of a sense of hopelessness and impotence shared by many in Mexico, where 98 percent of murders go unsolved and the state is virtually absent in some areas. By some estimates, just 12 percent of crimes are even reported in Mexico, largely because of a lack of faith that justice will ever be served.

Such a void, taken to extremes, has found its resolution in violence.

“There is a crisis in terms of the growth of violence and crime and a parallel erosion of authority and the rule of law,” Mr. Guillén said. “These lynchings acquire a double meaning. People lynch both the suspect and the symbol of authority.”

Interviews with dozens of residents about the lynching of the brothers — David and José Abraham Copado Molina — revealed little remorse. In the end, the fear that two suspects might be escaping with the help of the police outweighed concerns over spilling innocent blood.

“If they were innocent, and I’m not saying they were, then this is a case of one group paying for the crimes of another,” said Emanuel Petla, 33, near the site of the lynchings in October. “What happened the day of the lynchings is a situation that has been unraveling for some time now.”

“One thing led to the other,” he added. “Insecurity, frustration, confusion and weariness.”

The police are not exempt from mob action. Last year, five officers were badly beaten after they killed a villager during an operation. Two died from their injuries.

In the borough of Iztapalapa, residents have raised banners warning thieves that they will not be turned over to the police. Instead, vengeance will be taken on their mothers. In September, two men were set on fire in Chiapas State, having been accused of stealing a car.

Such frustration has long been an issue, along with the tendency for people to take the law into their own hands. In the last few years, self-defense groups have popped up to fight organized crime, filling the void left by government forces either incapable of combating criminal gangs, unwilling to do so or actively working alongside them.

But for all the government’s flaws, vigilantism rarely seems to do much better.

The initial gains of some self-defense groups give way to predatory behavior, creating a new order of bandit. Lynchings, too, seldom generate much more than public disgust and a fleeting sense of agency for the community.

And sometimes the community gets it wrong, as with the Copado brothers.

“I can’t imagine how this is happening in our country,” said Pablo Copado, a brother of the two lynched men. “They stepped on every inch of my brothers’ integrity, on all of their humanity.”

The two brothers had always worked together, ever since David, 34, persuaded his youngest brother to join him on the road as freelance pollsters for various companies. He had taught José how to approach interviewees and frame his questions.

It was no easy task. José, 30, could be quiet and withdrawn, the yin to David’s gregarious yang. José enjoyed odd hobbies, like making papier-mâché figurines and marshmallow lollipops, but held a deep reservoir of love for David, who was the eldest in the family, and David’s twin, 2-year-old sons. José was so devoted to the boys that David sometimes joked that he was the real father.

On the day they died, the brothers had arrived in Ajalpan around 9 a.m. They had come to this city of about 60,000 people for the firm Marketing Research and Services, polling residents about tortilla consumption by children. Often their work was like this, asking basic questions of populations on behalf of businesses collecting market data.

Though the job was standard enough, the context was not. The town was swirling in a tempest of fear. In the days before the pair arrived, social media brimmed with warnings about child abductions and admonitions to be on the lookout for strangers.

Just a few hours after the Copado brothers arrived, word began to spread about the two, dressed in slacks and collared shirts, carrying shoulder bags. By evening, a group of townspeople approached the pair outside a store.

The crowd demanded to know why they were asking about children. The brothers explained and produced identification. But the residents grew more aggressive, witnesses said, until the police arrived and took the brothers away.

The police are not a source of confidence here. Nearly every resident interviewed recalled an episode a year earlier, when a man had been caught stealing money from a church collection plate and the police had released him. Villagers tried then to lynch the man, but he escaped.

So when the police announced that the brothers were innocent, few believed them. Someone claimed there was a girl who could testify, a child who had been sexually assaulted.

The girl was ushered into the precinct, where she encountered the two brothers, shaking with fear. But she did not recognize them, officials said.

“She said she had never seen them,” said Enrique Bravo, the police officer on duty.

Her testimony did not save them.

The crowd had doubled by this time, their angry chants audible inside the station. The police shut the brothers in a small 8-foot-by-7-foot room. Guards were placed at the door.

Someone began ringing the town church bells, a call to arms. Hundreds more flooded the square, and a game of telephone ensued.

Roberto Hernández, 24, said he heard that the brothers had already confessed. Miguel Hernández, an ice cream vendor, recalled his neighbors yelling, “Come join us, we are going to get the robbers!”

After the mob punched its way into the building, fires were set and members broke open the cell, grabbing the brothers and dragging them into the plaza.

Afterward, the crowd looted the building, setting fire to the adult education center and the post office.

In the days after, a small shrine was erected in the parking lot, directly over the chalky residue where the brothers had been immolated.

Some mourned what the lynching had done to their town.

“We have such culture and tradition here, our food, our crafts,” Juan Guzmán, the deputy mayor, said. “But now we are known for this.”

For others, the reputation was not such a bad thing. Some residents reckoned it would be a long time before another thief or would-be kidnapper turned up in town.

In the Copado home in Mexico City, the effect has been devastation. David’s children cry often for their father, though they are too young to know what happened to him.

“They can feel his absence,” said the lynched brothers’ mother, Dulce María Montero. She has erected her own altar for her boys. For the Day of the Dead celebration here, she placed a pot of honey and guava on its mantel.

She prays that the sweet scent will guide her sons’ spirits home.