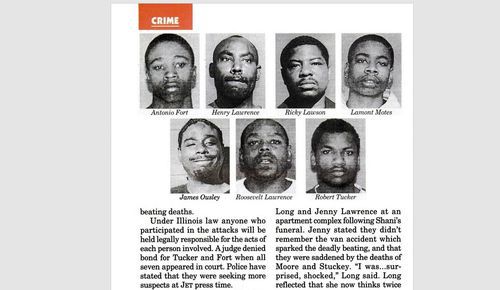 Sunday’s story in brief: a two-year old child ran out in the street and was killed by a car. Apparently as a result, someone shot the driver and a teenaged boy. Note the Milwaukee Journal Sentinel’s photograph has no humans visible: 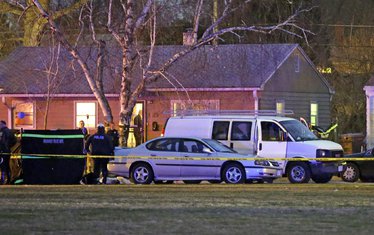 VDARE.com Editor Peter Brimelow, seeing this story, wondered if race was a factor, since there is no mention of race in it, no way of knowing whether the shooting victims, the two-year old accident victim, or the shooter were of any particular color.

I was able to find that it was almost certainly a black-on-black crime, and likely a black-on-black fatal accident. That is to say, the victims, the killer, the child and the neighborhood were all black. Here’s the photographs of shooting victim Archie Brown, Jr. and his father from the NY Daily News:

And here’s a follow up: apparently the shooter, possibly a relative of the child who had died after being allowed to run out in the street, decided to shoot the driver for killing the child—and possibly also the teenager who allowed him to run out. The white mayor of Milwaukee, Tom Barrett (Email him) actually did mention race in his comments:

Barrett described the double-shooting as a "horrific event that underscores many of the challenges that we face in the city" during a Monday afternoon news conference.

"Three deaths," he said. "It started out as a tragedy, as an accident, but the total loss of control, the total inability to control oneself in that setting, [emphasis added] led to two more tragic deaths"…

The Sunday shootings have brought the city's homicide total to 39 for the year, up from 14 at the same time last year. Many of the victims and suspects knew each other and most of the victims — at least 31 — were African-American, Barrett said.

Barrett has a solution: gun control!

The mayor also drew a direct connection between gun policy and increasing homicides and nonfatal shootings, which also are up by 38% compared to this time last year.

"There are more guns that are flooding the streets of our cities," he said.

At the same time, Milwaukee police have seized 628 guns so far this year, a 19% increase over this time in 2014, Barrett said.

"No increase in police staffing levels would have prevented the horrific tragedy on 48th St. yesterday. None," he said. "So there has to be something else and another way for us to deal with these issues."

He called for more state and federal resources dedicated to curbing gun violence, specifically an increase in funding for more prosecutors.

Mayor Barrett seems to feel that gun violence, almost all of it involving blacks, happens because blacks are allowed to have guns. But that’s not true—blacks without guns are capable of all kinds of violence.

And when Barrett speaks of “the total loss of control, the total inability to control oneself in that setting” he’s kind of giving the game away—this happens after traffic accidents in black neighborhoods a lot.

The Killing Of Danny Gilmore, 1988

Danny Gilmore didn’t even hurt anyone in his not-at-fault white on black car accident, but he’s still dead:

There wasn’t even any revenge in the death of white, 23-year-old, Danny Gilmore. One evening, in July 1988, he was driving his pickup truck through a black part of Cleveland, looking for the freeway. A black man on a moped pulled out without looking and bumped the truck. He was uninjured, but a crowd of about 40 black men soon showed up. A few started pouring beer into Mr. Gilmore’s truck. Someone tried to get into the cab and grab the keys. A scuffle broke out and the blacks mercilessly thrashed Mr. Gilmore. He broke away, stumbled in front of his truck, and collapsed on the street. One of the blacks started the engine, and as the crowd cheered, he crushed Mr. Gilmore under the wheels of his own truck. Mr. Gilmore was covered with so much blood that when the medics finally got to him they assumed he was black.

The black reporter for the Cleveland Plain Dealer who covered the murder immediately recognized that the story was racial dynamite, but his white editors buried it and, over his protests, suppressed the race angle. The killing got little local attention and no national coverage. The Cleveland homicide detective who covered the case explained it this way: “The mayor’s office doesn’t want us to have racial killings in this town, so Danny Gilmore’s death wasn’t a racial crime. And I’m the tooth fairy.”

[The Racial Politics of Murder | The race of the victim may be all that matters, by William Robertson Boggs, American Renaissance, December 1990]

The Crown Heights Riots, in which blacks attacked their Jewish neighbors, started with a traffic accident in which a car driven by Yosef Lifsh in a motorcade carrying Lubavitcher Rebbe Menachem Schneirson struck and killed a black 7-year old boy, and injured his 7-year old sister.

Accounts differ as to the next sequence of events. After the collision, Lifsh said that the first thing he did was to try to lift the car in order to free the two children beneath it.[10] The EMS unit that arrived on the scene about three minutes after the accident said that Lifsh was being beaten and pulled out of the station wagon by three or four men.[6] [11] All accounts agree that Lifsh was beaten before ambulances and police arrived.

Note that no guns were involved in the attack on Lifsh (who was not at fault in the accident). He survived the beating, and an Al Sharpton-orchestrated attempt to prosecute him. [Grand Jury Doesn't Indict Driver In Death of Boy in Crown Heights, By John Kifner, New York Times, September 6, 1991]

Note also that the beating wasn’t even caused by Sharpton’s racial demagoguery. It was automatic—a “total loss of control” by ghetto residents reacting to an auto accident.

The Killing Of Anthony Stuckey And Jack Moore, 2002

In 2002, I did one of my earliest “Not Reporting Race” pieces for VDARE.com: Race, Relevance And The Public's Right To Know. I read about two men being beaten to death by a Chicago mob after crashing their van into what I described, based on their behavior, as “a crowd of lowlifes” [Angry mob beats 2 to death, Washington Times, August 1, 2002]. The men were beaten to death by a mob with hands, feet, bricks and stones. (Mayor Barrett, take note.) I thought that it might be a case of white drivers beaten to death by a black mob, but could find no way to confirm the race of either.

The next day, I saw an item by the Wall Street Journal’s James Taranto, which said that everyone else had had the same suspicion [ What's Black and White and Red All Over?, Best Of the Web Today, OpinionJournal, August 1, 2002]. Taranto had received several emails from readers who assumed, based on the lack of racial identification

that the mob and the accident victims were black and the murder victims were white. This turned out to be mistaken; today's Chicago Tribune [Hillard vows to catch killers in mob beating, July 31, 2002] has pictures of Stuckey and passenger Jack Moore, both of whom were plainly black

Taranto said that his readers had been operating on a stereotype, not of blacks but of the media, whose regular omission of race in crime stories (except where “relevant”) he called “an eminently sensible policy in theory”—

If a white mob had attacked a black motorist, there's little doubt reporters would have presented it as a racist "hate crime" and it would have become a huge national story. And if a black mob had attacked a white motorist? It's easy to imagine reporters and editors deeming race "irrelevant"—or deeming its mention potentially explosive—and playing down the racial angle, just as our readers suspected they did.

This may amount to an argument for including racial references more often in crime stories. In this case, their omission led at least some readers to assume falsely that a pair of murders were racially motivated. In retrospect it's clear that the victims' race was relevant to the story, if only to dispel the suspicion that it was relevant to the crime.

But race was “relevant to the crime”—a group of white people wouldn’t have done this. Yes, you would have heard a lot more about this if it had been a white mob that killed them, but white mobs don’t do this after car accidents.

In the end, the Chicago police were able to find seven people who’d taken part in the murders and charge them, but the local population’s unwillingness to cooperate by testifying meant that no one went to jail for very long. 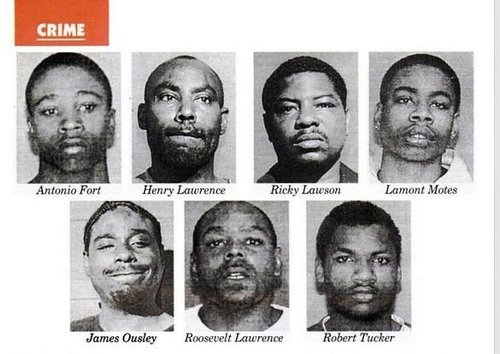 The photograph of the attackers above is from Jet Magazine, a black magazine which sometimes has clearer reporting on race than the MSM, because they never think race is not relevant. [Chicago Fatal Van Crash; Deadly Vigilantism Draws National Attention, August 29, 2002]

The Beating Of Steve Utash

You probably have heard of this one, since it happened in the age of the internet and was covered by Nicholas Stix and Paul Kersey. Utash, a suburban grandfather, was driving through Detroit when a ten-year old child ran in front of his truck. He was set upon and beaten by 15 to 20 local blacks, spent nine days in a coma, and suffered permanent brain damage (Beating of White Driver by Angry Mob After He Accidentally Ran Over Young Boy Ruled Not a Hate Crime, By Ryan Gorman, Daily Mail (London), April 4, 2014) The ten-year old, said to have recovered, may be in better shape after being hit by a truck than Utash. Some local blacks did go to jail for this one ['Not one of them cared,' Steven Utash's brother says at sentencings, July 7, 2014]

What conclusions can be drawn here?

And lynching is the word. You will read that there have been no lynchings in the United States since 1964, or thereabouts, but I’m afraid that only applies to lynchings committed by whites. The killings of Stuckey and Moore, and Danny Gilmore qualify as lynchings by the legal definition used in state laws—the only difference is the color of the mob.

Remember Derbyshire’s Rules, and remember that it may be better to leave the scene and head for a police station than be killed—possibly burned alive—in your car.

I’ve said that this kind of thing happens a lot, but you might say I haven’t proved it, with just four nationally-reported cases.

That’s because these incidents are systematically not reported. But ask any policeman has responsibility for dealing with car accidents in the black community how often he’s had to call for backup to deal with the crowd around an accident.

And remember that in Ferguson, the (black) mortuary attendants sent to take away way Michael Brown’s body were trapped in their vehicle for two hours:

It was not a safe situation…. The police could not control the crowd. There was times where we feared for our lives…. There was gunshots while we were there…. It took so long, because we could not do our job. It was unsafe for us to be there. [A cop told the Whitakers] “Stay in your vehicles. You guys do not have vests. The best thing for you to do is to kind of get down, and let us get control of the situation.”

[Funeral director explains why it took so long to remove Michael Brown’s body from street by FOX 4 Newsroom, Fox4KC, September 8, 2014.

I repeat—if you’re in an accident in the ghetto, don’t get out of your car.

Even if you’re black.