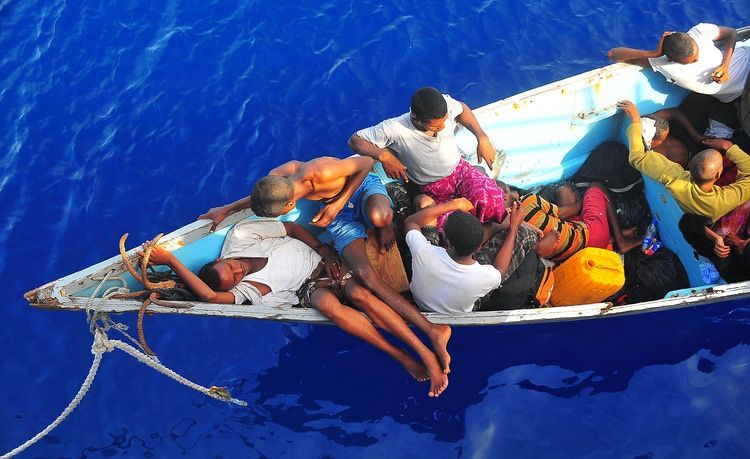 See, earlier: A Reader Asks If It Could POSSIBLY Be True That Immigration Will Reduce The (Federal) Deficit

If the European Union’s leaders are to be believed, Scandinavia would collapse if weren’t for Third World immigration. Without a constant influx of Iraqis and Somalis, the economy would stagnate. There’d be nobody to clean Helsinki schools at the end of the day, drive the buses and trams of Stockholm, or sweep the littered streets of notoriously filthy Denmark. And how could we survive without all those pizzerias and ethnic food shops that only take payment in cash?

Iraqis and Somalis may cost a little bit to integrate—and to persuade them that females don’t all enjoy being groped and raped—but once that’s done, they more than pay for themselves. Our ethnic diversity is our economic strength. Without our Alis and our Mohammeds—our “New Danes” and “New Finns”—we’d be like the Eastern Bloc: backwards, impoverished and living hand to mouth.

This argument logically implies that, if it could be empirically demonstrated that Iraqis and Somalis actually incur a very substantial economic cost, then, manifestly, we should stop letting them in. And we should consider repatriating those who are already here—at least once their home region is no longer at war.

I assume that this is precisely what Finland’s new left-wing Prime Minister—Antti Rinne, a labor organizer who was sentenced to 20 days in jail in 2011 for leading an illegal strike—will do, because recently published research has demonstrated that over their lifetimes each individual Iraqi or Somali in Finland incurs a net cost to the Finnish taxpayer of approximately one million euros. ($1, 397, 000).

The study— Immigrations and Public Finances in Finland: Part II: Life-Cycle Effects on Public Finances of Asylum-Seekers and Refugees—was published in March 2019 by the Suomen Perusta Foundation and is available online in Finnish with a summary in English. [PDF] It took information from Statistics Finland, the country’s office for national statistics, and from Finnish tax authorities, in order to compare the average amount of tax paid by Iraqis and Somalis who arrive in the country in their early 20s, as most do, with how much is spent on them by the state. It turns out that Finland could not only happily economically survive without Iraqi and Somali refugees, but that it would be significantly wealthier, able to improve its schools and hospitals, lower its taxes and would generally be a much better place to live.

The average Finn pays into the state approximately what he or she takes from it across his or her lifetime. But the story with Iraqis and Somalis is very different.

The average Iraqi brings a net loss of 690,000 euros across his life cycle. With the average Somali it’s even worse. At least a few Iraqis seem to be business-minded. Some of them open-up pizzerias, kebab restaurants and cut-price barbers, likely making a net contribution to the economy. For some reason, however, you don’t get many Somali restaurants or hairdressers in Finland. The average Somali incurs, for the land that has welcomed him or her, a net loss of 951,000 euros across his or her life time. To round it up, the average Somali in Finland costs Finland about a million euros.

But what if these immigrants have children? We are supposed to believe that all races have roughly equal genetic intelligence and it is only Somalia’s poverty that means that it has an average IQ of 70, i.e. retarded by Western standards. And the average Finnish woman has 1.84 children while the average Somali woman in Finland has 4. [Women with foreign background become mothers younger, By Marja-Liisa Helminen, Statistics Finland, June 17, 2013] So, in that this Somali woman will provide Finland with four engineers or doctors—just as Finnish TV commercials and dramas imply—when we take children into account, surely they’ll be a net benefit to the economy from Somali immigration…indeed it will be invaluable!

Sadly…no. If you take the children into account, then, based on the available data, each Iraqi immigrant incurs a net loss of 844,000 euros, while each Somali immigrant gives us a net loss of 1,343,000 euros. This is, of course, roughly consistent with the fact that the average Iraqi IQ is 87, one standard deviation below the European average, while the average Somali IQ is 70, 2 standard deviations below it. [Intelligence, by Richard Lynn and Tatu Vanhanen, 2012]

Whereas 11% of Finns aged 22 are on job-seekers allowance, among Iraqis and Somalis who were born in Finland, it is 50%.

And this is not some economic quirk of the land of the Moomins. It’s not caused by some cultural factor, such as Finnish not being related to English and so being harder to learn than English-kin languages such as Danish or Swedish. Third World immigrants, including second generation Third World immigrants, suffer from very high rates of unemployment all across Scandinavia i.e. are ultimately a drain on the economy. Thus a study from Denmark for the year 2013 found that average contribution to the economy made by a Third World immigrant was negative 2,238 euros per year. [The fiscal impact of immigration to welfare states of the Scandinavian type, By Marianne Hansen et al., Journal of Population Economics, 2017 ]

Salminen’s findings were widely reported in the Finnish press…and widely condemned, with Leftists doing logical gymnastics to try to find some means of undermining them. However, he was at least invited on the Finnish TV show Dosentti, on which academics are interviewed, to discuss them .

Hannu Piekkola, [Email him] Professor of Economics at Vaasa University, told the Tampere newspaper Aamulehti that Salminen’s findings meant that Third World immigrants were no more of an economic drain than Finnish disabled people—ignoring that those disabled people would have been born in Finland usually to tax-paying Finns.

Piekkola also claimed that Finland has a low birth rate that immigrants are good for the economy because they stimulate by spending money [Professori kritisoi varsinkin lasten ottamista perussuomalaisten maahanmuuttotutkimukseen: “Järjenvastaista, kun on matala syntyvyys”, By Joonas Kuikka, Aamulehti, March 18, 2019]. That these immigrants will reduce Finland’s average IQ, making it a country more like their own in terms of economic output, and that they are simply spending money they are given by the Finnish state appeared not to occur to this “Professor of Economics.”

Other critics complained that Salminen’s report was a problem because it could be “used” by the Finns Party as a means of making electoral gains. [ “Not Beneficial”: Think Tank Puts Huge Price Tag on Iraqi, Somali Migrants, Sputnik, March 19, 2019]

So, let us be clear. Not only do Third World Muslim immigrants bring Finland gang rape, rape with scissors and genital mutilation, and the suicide-causing grooming and rape of underage native girls, but, in addition, each of them costs Finland as much as one million euros across his or her lifetime, something that is likely the case wherever in Europe they call home.

There can be absolutely no justification for allowing Iraqis and Somalis into Finland. Unless, of course, you don’t like Finns and want to Elect A New People.

What was it Marie Kondo advised everyone to do with something that no longer brings you joy?