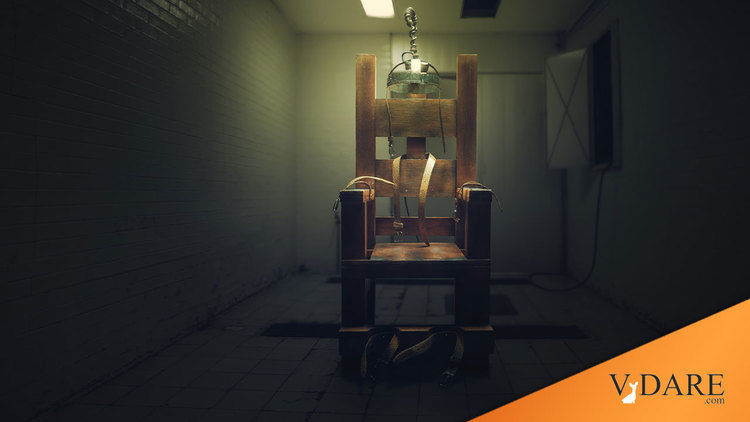 As we all know IQ is a hoax and a useless concept of no validity. Except ...

WASHINGTON — The Supreme Court on Tuesday ruled that Florida had adopted too rigid a cutoff in deciding who is eligible to be spared the death penalty on account of intellectual disabilities.

“Florida seeks to execute a man because he scored a 71 instead of 70 on an I.Q. test,” Justice Anthony M. Kennedy wrote for the majority in a 5-to-4 decision. He was joined by court’s four more liberal members.

When the court barred the execution of people with mental disabilities in 2002 in Atkins v. Virginia, it largely let the states determine who qualified. ...

So this case is 36 years old — even for a death penalty case that's a long time.

of Karol Hurst, who was 21 and seven months pregnant when Freddie L. Hall and an accomplice forced her into her car in a supermarket parking lot. She was found in a wooded area, where she had been beaten, sexually assaulted and shot.

How high of an IQ do you need to know you shouldn't beat, sexually assault, and shoot a seven months pregnant woman?

By the way, then Hall and his accomplice killed a cop. (You can kind of see why the State of Florida has been trying to execute this guy for 36 years.)

After the Atkins decision, Mr. Hall challenged his death sentence, relying in part on the earlier state court determinations.

Well, Mr. Hall may not understand "Thou shalt not kill," but he's still managed to win a Supreme Court case.

The Atkins decision gave states only general guidance. It said a finding of mental retardation requires proof of three things: “subaverage intellectual functioning,” meaning low I.Q. scores; a lack of fundamental social and practical skills; and the presence of both conditions before age 18. The court said I.Q. scores under “approximately 70” typically indicate retardation.

A Florida law enacted not long before the Atkins decision created what Mr. Hall’s lawyers called an “inflexible bright-line cutoff” requiring proof of an I.Q. of 70 or below. In 2012, the Florida Supreme Court ruled that Mr. Hall could be executed because his I.Q. had been measured at various times as 71, 73 and 80.

The court returned Mr. Hall’s case to the lower courts for a fresh assessment of his condition. “Freddie Lee Hall may or may not be intellectually disabled,” Justice Kennedy wrote, “but the law requires that he have the opportunity to present evidence of his intellectual disability, including deficits in adaptive functioning over his lifetime.”

I wrote about the Supreme Court's 2002 IQ decision:

Several IQ researchers, accustomed to having their field of expertise ignored or denounced as racist and fraudulent, were bemused by Thursday's vote by six Supreme Court Justices to ban the execution of murderers, in effect, who score poorly on IQ tests.

As staunch defenders of the much-maligned concept of the intelligence quotient, these scientists found vindication in the Supreme Court's embrace of intelligence testing, though they cautioned that the Justices' understanding of the complex subject was simplistic.

The IQ experts were particularly amused that newspapers that routinely condemn IQ tests as biased and meaningless were quick to endorse intelligence exams in this case. The New York Times, for example, editorialized, "[I]nflicting the death penalty on individuals with I.Q. scores of less than 70 who have little understanding of their moral culpability violates civilized standards of justice."

Linda S. Gottfredson, co-director of the University of Delaware-Johns Hopkins Project for the Study of Intelligence and Society, said, "Just about the only time I see journalists and liberals take IQ seriously is when it meets their ideological predilections. For example, they treat IQ as real when anyone claims that early intervention raises it, but not when evidence goes the other way. And so it is with crime. We are told we must not link IQ with crime, unless low IQ can be used to roll back the death penalty." ...

More controversial among the IQ experts was the Court's assertion that the "deficiencies (of the mentally retarded) do not warrant an exemption from criminal sanctions, but diminish their personal culpability."

Psychometrician Chris Brand, a consultant with the Woodhill Foundation and a one-time staff psychologist at a British prison, agreed.

"My inclination is to say the low IQ do know murder is wrong, but that their grasp and control of their own actions is rather slight when temper or sex are roused or drink is taken," he said.

On the other hand, the death penalty is seldom applied in crimes of passion. It's more likely to be demanded in aggravated cases where the murderer showed logical foresight, such as by killing his robbery or rape victims to prevent them from identifying him.

Some of the IQ experts were skeptical of whether avoiding aggravated murder required much in the way of sophisticated powers of reasoning. (All agreed, however, that individuals with scores below 50 suffered profound limitations.)

Richard Lynn, a professor emeritus of psychometrics at the University of Ulster, suggested, "An adult with an IQ of 70 has the mental age of the average 11.5 year old child, and these will certainly know that killing people is wrong."

Gottfredson suggested, "Most individuals below the 75 IQ level understand the basic rules of society. They know that hurting other people is wrong. They are not uncivilized. I have a mildly retarded brother and he is very aware of moral standards of right and wrong."

Some IQ experts were concerned that the Supreme Court's ruling would make the low IQ appear as morally less than fully human by officially labeling them as inherently less able to comprehend basic ethical rules such as "Thou shalt not kill."

This is an issue of surprisingly broad social importance. The intelligence researchers noted that while IQs below 70 or 75 are extremely rare in the kind of circles that modern Supreme Court justices travel in, they are much more common in other social settings.

The researchers said that the majority of low IQ individuals do not suffer from medical problems such as Down's Syndrome. Gottfredson noted, "About 75 percent-80 percent of mental retardation is called 'familial,' because it mostly just represents the unlucky combinations of genes that are passed in the normal manner from parents to children. Only a small proportion of mental retardation is due to organic problems, such as chromosomal abnormalities or brain damage. This is just like height. Most very short people are perfectly normal."

The stereotype that most low IQ children are what obstetricians often callously refer to in their notes as FLKs - "Funny Looking Kids" is not true. Elite members of American society tend not to realize this because when an extremely high-IQ person, such as a Supreme Court justice, has a retarded child, it's generally due to organic causes.

As children, these "familial" low-IQ individuals fit in well on the playground, where they may be indistinguishable from their higher-IQ friends. They are normal, except that they run into problems when they need to do the higher-order, abstract thinking that a modern society rewards. ...

Finally, the Court's decision officially designates that a much larger fraction of the African-American population is of diminished moral capability compared to the white and East Asian populations. About 2 percent-3 percent of whites or East Asians don't exceed 70 on IQ tests, vs. 10 percent-12 percent of American blacks (and more than 20 percent score below 75).