Re: A Reader Asks About The Fate Of A Swedish Victim Of Immigrant Rape 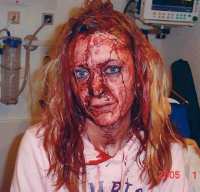 The woman is in a picture that dates back to at least 2005—Fjordman’s blog post Immigrant Rape Wave in Sweden, December 12, 2005.

According to this article, Sweden: Migrants are responsible for 95% of all crimes, overrepresented by +430%, the woman in the picture, Linda, survived. She was with a friend, Jenny Lemon, who was also brutally raped. She survived also, but both women must live with the aftermath of these horrible crimes.

This article appears to discuss Swedish victim Jenny, but is more of a sob story for one of the Muslim rapists, who was in turn sodomized, presumably in prison: Mannen som våldtog Jenny blev våldtagen, Expressen, (Sweden)December 20, 2005.[Google Translate  The man who raped Jenny was raped .]

Not sure if there is truth to the article, but the Swedish  journalist closes by writing that Jenny 'feels sorry' for her Muslim rapist, who was raped in prison:

"Jenny is horrified to hear what happened, and she is not even close to thinking that "Now he got what he deserved!" - No, this is something that I do not even wish my worst enemy, she says. And this was your worst enemy? - Yes exactly. "