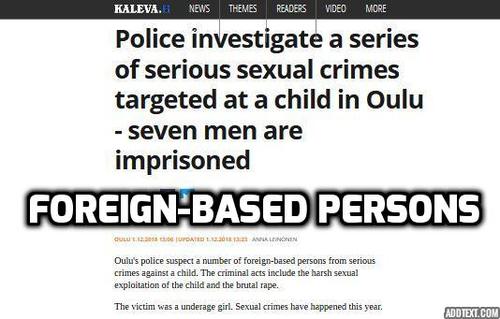 Muslim Grooming Gangs In Finland—Exposed, As In U.K., By “Right-Wing Extremists”

See also, from 2008, The Finnquisition And VDARE.COM and from July of this year Finnish Newspaper "Trolls" Trump On Press Freedom—But Finland Doesn't HAVE A Free Press. It Has Hate Speech Laws.

What comes to mind when you think of Northern Finland? A Winter Wonderland? Sleepy streets of wooden cottages? Children sledging along snow-blanketed roads, their parents confident that in such a homogenous, trusting society they have nothing to fear? That’s how it was as recently as 15 years ago. But now those little girls may well meet up with a gang of Muslim “refugees” from the local “reception center” who have “groomed” them online, and go back to their apartments where they’ll be forced to suck penises or have full penetrative sex. And, as in Britain, this scandal has only come to light because “right-wing extremists” exposed it.

It’s just been revealed that this is precisely what has been happening in Tuira, a run-down area in the city of Oulu, which markets itself as “the Capital of Northern Scandinavia.” Founded in 1605, Oulu was, even a decade ago, a relatively international kind of a place. Its key employer was the Finnish mobile phone manufacturer Nokia, resulting in it importing computer programmers from all over the world. But it’s a very different kind of import for which Oulu is now becoming dubiously famous: Muslim child grooming and rape.

This unexpected aspect of multicultural enrichment occurred in London as early as the 1950s. But it only hit the public consciousness after it had been happening for a decade or so in neglected northern English industrial towns like Rotherham. That town’s Politically Correct authorities did everything they could to suppress reports that they’d first received as early as 2001. There were, as a consequence, no convictions until 2010 when five men of Pakistani descent were found guilty of sexually abusing working class white girls aged between 12 and 16. Rotherham’s child protection services had known what was going on for a decade and had done nothing about it. [Revealed: conspiracy of silence on UK sex gangs, The Times, January 5, 2011]

Finland, and especially Oulu, joined the multicultural party relatively late. It wasn’t until summer 2005 that a group of three Muslims persuaded a young Oulu woman to go back to their apartment so that they could cut off her clitoris with a pair of scissors and rape her with them [Julma raiskaus toi vankeutta kolmelle Oulussa, Turun Sanomat, November 1, 2005, Google Translate], a crime for which they received laughably lenient sentences. But the newspapers did at least report the rapists’ names and backgrounds.

However, the following year, Oulu became notorious for gang and individual rapes of local girls [Oulun raiskaukset yhä selvittämättä, Ilta-Lehti, April 6, 2008]. By this time. the newspapers had stopped printing names. Eventually, even the police press releases merely described the rapists as being of “foreign background”—as if Oulu girls walking home on a winter’s night had to be weary of gangs of lustful American IT specialists.

But now Muslim child grooming has arrived in Finland, with the “Capital of Northern Scandinavia” leading the way. In late November, eight men were brought before Oulu magistrates for the rape and sexual abuse of native girls aged between 10 and 14, likely from lower class backgrounds. The Leftist multicult-promoting local newspaper vainly fudged that the abusers were of “foreign background” .[Poliisi tutkii lapseen kohdistunutta törkeiden seksuaalirikosten sarjaa Oulussa—seitsemän miestä on vangittu, by Anna Leinonen, Kaleva, December 1, 2018 Everyone knows by now that this, and also the collective noun “youths,” means “Muslim.”

The Oulu deputy chief of police said he’d never seen anything like it 38 years of policing [Eight enemy soldiers arrested for raping Finnish schoolgirl in Oulu, Ålands Nyheter, December 4, 2018]. A few days later, in an unusually frank move, the police disclosed that there were ten men under court investigation and that every single one of them was either an “asylum-seeker” or a European Union “quota refugee” [Ålands Nyheter, above] and that some of them had even been given Finnish citizenship [Finnish interior minister on Middle Eastern rape gangs: “This should not be happening in Finland!”, Ålands Nyheter, December 4, 2018].

This is strange, in a country where everything is usually done to cover up the fact that Muslim “refugees” are behind a crime.

Perhaps fearful of the distrust that similar scandals had caused in the UK, Finland’s political class has been notably quick to glibly and self-servingly condemn what had happened. Finland’s Prime Minister, the Centre Party millionaire Juha Sipilä, who hails from Kempele, close to Oulu, tweeted that “The offences in Oulu are appalling. Sexual assault on a child is an inhumane act of inconceivable evil” [Finnish prime minister condemns child sex abuse in city of Oulu, Ålands Nyheter, December 5, 2018].

This is the same Juha Sipilä who was elected premier in 2015 on a promise of letting in fewer refugees before promptly giving refuge to 32,478 of them  in that year alone (Finland’s population is a mere 5.5 million), due to the supposed uniqueness of the “crisis” that September [Reception of Refugees in Finnish Local Authorities, January 7, 2016]. Sipilä even encouraged Finns to take these Muslim young men into their homes and pledged to do so himself—although he never did [Refugee crisis: Finland’s prime minister pledges to give up his home to accommodate refugees, By Adam Withnall, Independent, September 6, 2015]. Within two months, these new asylum-seekers had gang-raped a 15-year old girl who was walking home from school in Kempele [Murrosikäinen tyttö raiskattiin Kempeleessä—poliisi ottanut kiinni kaksi ulkomaalaista nuorta miestä, YLE, November 24, 2015, Such offences were indeed, as Sipilä said, “appalling.” But they’ve been committed on his watch.

But now, sensing the furious public mood, the Finnish Main Stream Media and police have experienced a slight change of heart. The Muslim rapists had groomed these girls over social media before persuading them to meet them in, for example, local playgrounds. This has prompted the police to put out a warning, reported in Kaleva, for parents to monitor their children because “foreign-background men” were grooming kids for sex over social media.[Children are attracted to contact via the internet, Finnish Police Service, December 4, 2018 Google Translate] And Kaleva was, most atypically, openly divulging, what everyone surely knew—that the culprits were “refugees” rather than Canadian gaming enthusiasts [Oulun johtavat poliitikot huolissaan seksuaalirikoksista—Valtuuston puheenjohtaja Hänninen syyllistää suoraan maahanmuuttopolitiikan, Pitko ja Parkkinen eri linjoilla,  by Heikki Uusitalo, Kaleva, December 5, 2018]

This ostentatiously emotional reaction by Finland’s political Establishment is entirely understandable. It turns out that every effort had indeed been made to cover up this dimension of Oulu’s increasing vibrancy and cosmopolitanism.

The role of this “far right” councilor in bringing to this scandal light has been completely suppressed in Finnish MSM coverage—meaning that the international MSM, which it has now reached, is entirely ignorant of it [Ten-year-old girl “was repeatedly raped by foreign grooming gang” in Finland - prompting police to warn of “foreign men” contacting underage girls on social media,  by Sara Malm, Mail Online, December 6, 2018]. In much the same way, the Muslim grooming scandals in England were only reported in the newspapers because of pressure from the British National Party. [I wrote the first ever piece about the grooming gang scandal in northern English towns in 2006—but the media didn’t want to know, By Julie Bindel, Independent, May 16, 2017].

The cops' atmosphere and attitude seems to be against native Finns nowadays. Say what they will, but at least here in Oulu you can’t let your kids go out anywhere, and thanks for that goes out to our politicians who have invited their guests.

It was Wiik—who goes by the nickname “Swan of Tuonela”—from whom you can discover the precise nature of the offences: not just rape but forced oral sex and forced imprisonment—which in this context means refusing to let the victims leave until they were finished. Wiik occasionally writes and broadcasts in English:

The swan is Finland’s national bird and “Tuonela” is the name of the underworld in the country’s pre-Christian mythology, as presented its 1831 folklore epic Kalevala. The  Kalevala (on which Sibelius’s 1895 symphony is based)  played a role in Finland’s nineteenth century “National Awakening” and its desire for independence from Russia, which it achieved on December 6, 1917.

But Finland—and Oulu in particular—now finds itself with a new colonizer which, like so many colonizers, asserts itself through rape of the daughters of the defeated.

Finland’s ruling class, who hypocritically preach Multiculturalism while living in all-Finnish areas, have let this colonizer in and have only acknowledged the full horrors of what this has caused when their hand has been forced by a councilor whom they have persecuted for “hate speech”—he was recently fined 300 euros for warning about this exact danger. [Junes Lokalle sakot kiihottamisesta kansanryhmää vastaan, Kaleva, September 20, 2018]

Nobody would know about this if my fiancé wasn't an insufferable autist hellbent on checking every tip received. The only reason cops admitted this was happening is because he started making noise on social media. https://t.co/iew25Ec73c

Hopefully, what has happened will incite the people of Oulu, and Finland more broadly, to sweep away the “human garbage” that sits on their councils and in their parliament and gain independence once again…not from Soviet Russia but from its ideological fellow-travelers in Finland and from the Muslim rape gangs whom they have blithely allowed to prey on Oulu’s 10 year-old girls.