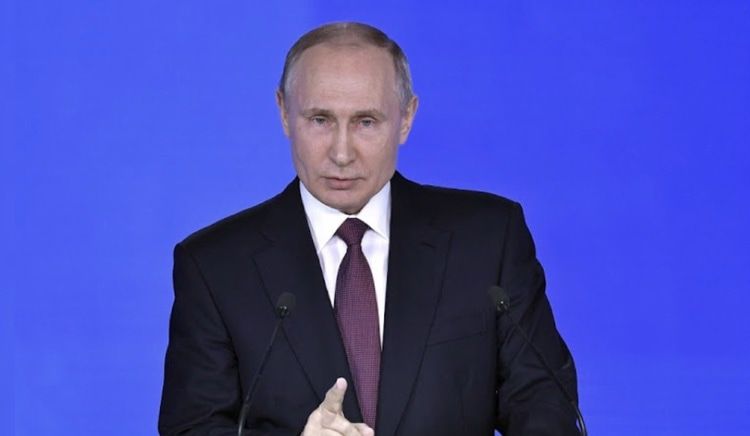 "The liberal idea has become obsolete. ... (Liberals) cannot simply dictate anything to anyone as they have been attempting to do over the recent decades."

Such was the confident claim of Vladimir Putin to the Financial Times on the eve of a G-20 gathering that appeared to validate his thesis.

Consider who commanded all the attention at the Osaka summit.

The main event was Trump's meeting with China's Xi Jinping and their agreement to renew trade talks. Xi runs an archipelago of detention camps where China's Uighur Muslims and its Kazakh minority have their minds coercively "corrected."

A major media focus at the summit was Trump's meeting with Putin where he playfully admonished the Russian president not to meddle again in our 2020 election. The two joked about how both are afflicted with a media that generates constant fake news.

Trump called the prince "a friend" who has done a "spectacular job."

Trump then left for Seoul, traveled to the DMZ, and crossed into North Korea to shake hands with Kim Jong Un, who runs a police state unrivaled for its repression.

Negotiations on Kim's nuclear weapons may be back on track.

Among other G-20 leaders present were Hindu nationalist Narendra Modi of India and President Recep Erdogan of Turkey, who has imprisoned tens of thousands following a coup attempt in July 2016.

In his interview with the FT's Lionel Barber, Putin appeared as much an analyst of, as an advocate for, the nationalism and populism that seems to be succeeding the 20th-century liberalism of the West.

Why is liberalism failing? Several causes, said Putin. Among them, its failure to deal with the crisis of the age: mass and unchecked illegal migration. Putin praised Trump's efforts to secure the U.S. border:

"This liberal idea has become obsolete. It has come into conflict with the interests of the overwhelming majority of the population. ... This liberal idea presupposes that ... migrants can kill, plunder and rape with impunity because their rights as migrants have to be protected."

His comments came as 10 Democratic candidates in the second presidential primary debate were raising their hands in support of the proposition that breaking into the USA should cease to be a crime and those who succeed in breaking in should be given free health care.

Putin also sees the social excesses of multiculturalism and secularism in the West as representing a failure of liberalism.

In a week where huge crowds celebrated the 50th anniversary of the Stonewall "uprising" in Greenwich Village, as it is now called, with parties and parades, Putin declared:

"Have we forgotten that all of us live in a world based on biblical values? ... I am not trying to insult anyone because we have been condemned for our alleged homophobia. But we have no problem with LGBT persons. God forbid, let them live as they wish."

He added, "But some things do appear excessive to us. They claim now that children can play five or six gender roles."

Putin did not back off: "Let everyone be happy ... But this must not be allowed to overshadow the culture, traditions and traditional family values of millions of people making up the core population."

Putin took power, two decades ago, as this 21st century began. In recent years, he has advanced himself not only as a foe of liberalism but a champion of populism, traditionalism and nationalism.

Nor is he hesitant to declare his views regarding U.S. politics.

Of Trump, Putin says, "He is a talented person (who) knows very well what his voters expect of him. ... Trump looked into his opponent's attitude toward him and saw changes in American society."

Recalling his own controversial comment that the collapse of the Soviet Union was the greatest tragedy of the 20th century, Putin said the tragedy was not the death of Communism but the shattering of the Russian Federation into 15 separate nations.

The tragedy was the "dispersal of ethnic Russians" across the newly independent successor states of the Soviet Union: "25 million ethnic Russians found themselves living outside the Russian Federation. ... Is this not a tragedy? A huge one! And family relations? Jobs? Travel? It was nothing but a disaster."

What may be said of Putin?

He is no Stalin, no Communist ideologue, but rather a Russian nationalist who seeks the return of her lost peoples to the Motherland, and, seeing his country as a great power, wants NATO out of his front yard.

While we have issues with him on arms control, Iran and Venezuela, we have a common interest in avoiding a war with this nuclear-armed nation as we did with the far more menacing Soviet Empire of the Cold War.

Post
We Call This Treason: Mayorkas Admits 12,000+ Illegal Aliens Released in USA—After Promising They Would be Repatriated

Post
Goldman Sachs/Ozy Scam: If This Isn't Proof Of White Privilege, I Don't Know What Is