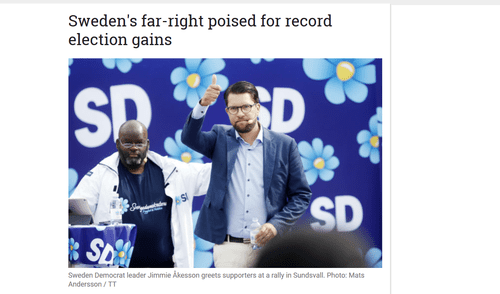 Sweden's Election: "The Conflict Is Between Those Who Want To Destroy Our Country And Those Who Are Trying To Save It." Mid-Term Slogan For Trump? 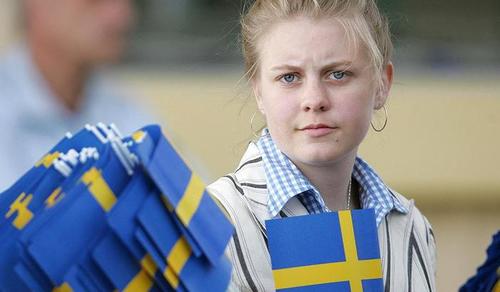 Not so long ago, the word “Sweden” brought to mind Pippi Longstocking-style rural idylls, ABBA, and the unashamed attitude to nudity satirised in a 2003 Simpsons episode in which traffic in Stockholm is directed by a naked policewoman. But if you go to Stockholm these days, you’ll be confronted with a train station that resembles downtown Baghdad, the widespread groping of females who aren’t in Islamic dress, and police officers absent from Islamic “no go zones.” The sky-high levels of trust and cooperativeness that gave us the gleaming Ikea-stereotype have resulted in an unarmed invasion and a collective death wish. Women daren’t walk the streets; and if they report getting raped by a refugee then they’re “racist” and somehow to blame.

But a growing minority of Swedes seem to have had enough. They’re increasingly realising that their Sweden can and will be completely lost. And it seems they intend to make their feelings heard load and clear in the Swedish parliamentary elections to be held September 9.

If the polls are correct, then the Sweden Democrats—led by 38 year-old former web-designer Jimmie Åkesson—may get as much as 20% of the vote, in a country whose electoral system is pretty close to pure Proportional Representation; the country being divided into a number of large multi-member regions [Sweden’s far-right poised for record election gains, AFP, The Local, August 26, 2018].

Considering the consensual nature of Swedish politics, the rise of the Sweden Democrats has been astounding.  Since 1936, Sweden has been dominated by the Social Democrats, who have a created a “Nordic Model” high-tax, high-equality, cradle-to-grave socialist society that has become part of the national sense of self. In the 82 years since 1936, there have only 17 years in which the Prime Minister wasn’t a Social Democrat, with the Social Democrats in power continuously from 1936 to 1976.

Levels of trust are so high, or used to be, that politicians didn’t bother with security—until the foreign minister being stabbed to death in a department store by a Serbian mental case. [Swedish foreign minister dies after stabbing, By Agencies, The Guardian, September 11,  2003]. But the flip-side of this “trust” is a very high pressure to conform. This is a society in which you weren’t allowed to stop paying membership tax to the Lutheran Church until 1951, unless you gave a reason. Roland Huntford’s 1971 book The New Totalitarians [PDF] explored what life was like in Sweden at the time. He found that instead of relying on the violence employed by Communist regimes, Swedish totalitarianism was just cleverer. Without anyone noticing, over the 40 years the Social Democrats held sway, the state was completely politicised so that everyone with power was a Social Democrat: judges, doctors, school teachers . . . everybody. Socialist thinking directed everything and a deep-routed sense of conformism and trust meant that nobody questioned it, because, on paper at least, Sweden was a multi-party democracy; though its “Overton Window” at little more than a crack in the wall.  (Huntford’s work influenced VDARE.com Editor Peter Brimelow in his writing on Canada and the U.K.).

Voting in Sweden isn’t really by secret ballot, such is the social unity; not in practice. To demand this be enforced would be to stir things up; to show that you were distrustful and not a co-operator.  Until recently, all the parties’ policies were so similar—and politics so good-natured—that it didn’t need to be. You selected—often in full view—the colored slip relating to your preferred party and went behind a screen to mark it. International election monitors are—for the first time—in Sweden this year to ensure that voting really is by secret ballot [International observers to monitor Swedish election for first time, TT, The Local, August 20,  2018].

This is probably a good idea, because the spirit of revolt is now stronger than the stench from Sweden’s infamously potent “sour herring.” It began, slowly, in 2010 when the Sweden Democrats—reviled in the media—got just over 5% of the vote, allowing them to enter the Riksdag for the first time with 20 seats. The Sweden Democrats campaigned on a platform of getting out of the EU and clamping down on refugees, work-shy immigrants and Islam whom they saw as undermining the country’s generous social system and taking money which should go to Swedish pensioners. This was summed up in a campaign video in which an elderly Swedish lady was outrun by burka clad women with prams, a nod to their huge fertility rate.

So, suddenly, the Sweden Democrats had a voice in parliament and the unsayable could be said there, “normalizing” the party and its views.

In 2014, when it was looking like the Sweden Democrats would increase their vote share, their posters were defaced, postmen refused to deliver their election leaflets, and a school, where they intended to do a photo opportunity, barricaded them out. [Who are the Sweden Democrats? By Adam Bott, New Internationalist, May 23,  2014] But it didn’t work. They took 13% of the vote, making them the third biggest party in the Riksdag, and the eight-year long “conservative” government., which had let in about 100,000 Muslim immigrants annually, [Sweden sees record numbers of asylum seekers withdraw applications and leave, By Charlotte England, The Independent, August 25,  2016] collapsed in the polls.

This was the “conservative” government whose Prime Minster, Fredrik Reinfeldt, had said, in words that might well be carved on Europe’s tombstone:

Is this a country that is owned by those who have lived here for three or four generations, or is Sweden what people who come here in the middle of their lives make it into and develop it into? To me, it is obvious that it is the latter.

You noticed the difference over that 8 years. In 2006, in the small northern town of Haparanda—with its picturesque church—the only foreigners you saw were Finns, coming over the nearby border to go to Haparanda’s branch of Ikea. But by 2015, there were gangs of young, male Iraqis hanging around, with nothing to do, in pretty much every public space. Where there was a municipal bench, there’d be a group of 3 or 4 Iraqis sitting on it, free iPhones in hand. A Swedish friend of mine—a university professor, one of the most mild-mannered people you could hope to meet, directly told me that what Prime Minister Reinfeldt had done was “treason.” 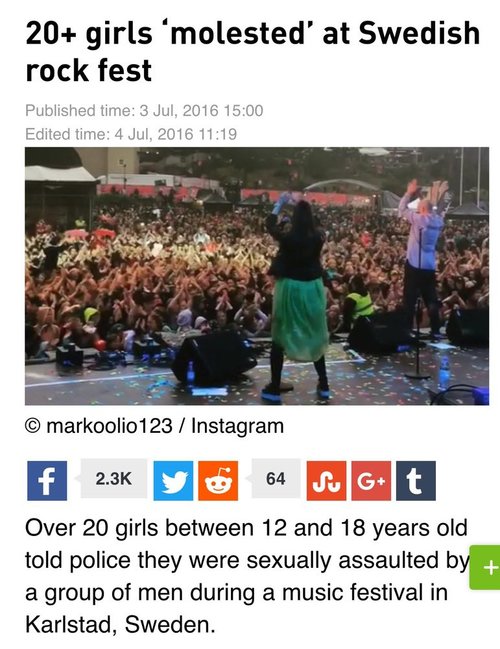 he Social Democrats were in power once more. And as if to stress this, they made the serious strategic error of admitting 160,000 refugees in 2015; the highest per capita rate in the EU. By the following year, however, as the rape wave worsened further, there was mass sexual assault at a Swedish music festival (duly covered up by the police and the press), and mass murder in Paris, the government was paying applicants 3,500 euros each to go home. The cosy consensus-politics of Sweden—where you don’t discuss immigration—was shattered.

Immigration became the issue, and it’s an issue which the Sweden Democrats completely own.

Fear of the Sweden Democrats’ likely success has led to a nasty election campaign. In Eskultuna—as in the centre of most Swedish towns during elections—each party had a little wooden hut, from which they distributed election leaflets. However, in August, a group of men turned up on bicycles and started harassing the Sweden Democrat  activists and the members of public who were talking to them.

The Sweden Democrats leader has responded in kind. In public election debates—refusing to share a platform with so popular a party leader is no longer an option—Åkesson has called Reinfeldt’s government “the worst government of the modern age,” Prime Minister Stefan Löfven’s border policy “total hypocrisy,” and Dan Eliasson, the former head of police, “a walking catastrophe” [Fear and loathing on the Swedish campaign trail, By Charlie Duxbury, Politico, August 27th 2018].

By Swedish standards, this is Trump-like behaviour, and if the polls are right, it seems to be working, to the extent that House of Cards star Joel Kinnaman, who is half-Swedish and was raised in Stockholm, has publicly begged the Swedes not to go down the Trump route. [Hollywood actor Joel Kinnaman in heartfelt plea to voters of Sweden, The Local, August 27,  2018]

As if to highlight Åkesson’s points, in mid-August, masked “youths”—the accepted code for young Muslim men—rioted in Sweden’s major cities, setting fire to roughly 80 cars. The Social Democrat Prime Minister Stefan Löfven seemed genuinely perplexed. He noted that the “youths” seemed highly organized—“like a military operation”—and complained: “I get pissed off for real . . . What the hell are you doing?!” [Swedish prime minister lashes out after masked youth torch dozens of cars nationwide, By Toyin Owoseje, Independent, August 14, 2018].

Nevertheless, the Sweden Democrats’ message is resonating with the Swedes in a way that seemed unthinkable in 2010. In election broadcast last year, [Sweden Democrats Sverigedemokraterna Jimmie Åkesson Akesson English Campaign Election Ad Subtitles, YouTube, May 30, 2018] aimed at this year’s election, they didn’t mince words as they addressed the other parties and the media:

You were wrong. Mass immigration is not a net benefit. We know this now…You have understood nothing…People have been killed and will continue to be killed because of your policies. And you will continue to cover things up and lie…The conflict in Sweden is between those who want to destroy our country and those who are trying to save it. The conflict is between you and us.

Sounds like a good mid-term slogan for Donald J. Trump!