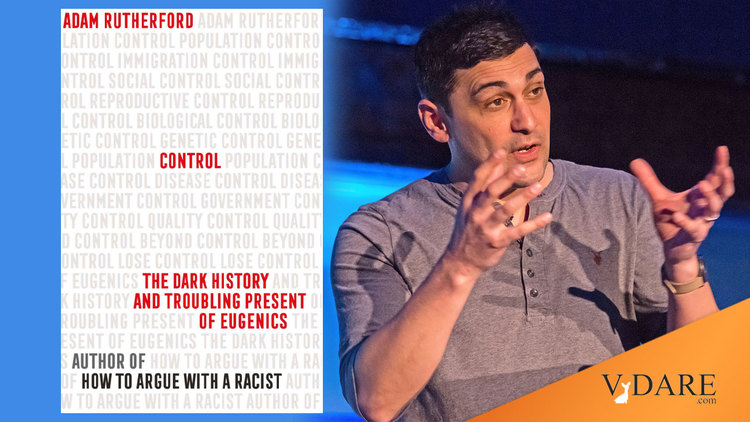 Science Hack Adam Rutherford, Himself The Product Of Eugenics, Gets Emotional About Eugenics—A Symptom Of Our New Dark Age

See, earlier (2010), The Fulford File: "Eugenics" Is What Happens When Cousins Don't Marry 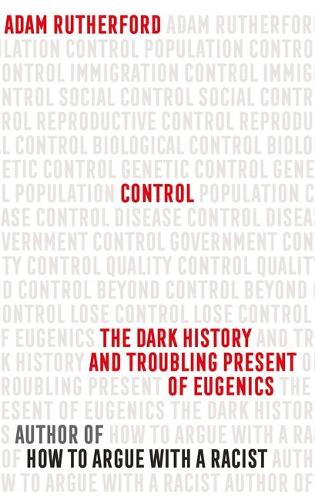 Writing a “popular science” book is no easy task. You must deftly walk a tightrope between making your arguments exciting, absorbing and comprehensible to the “educated layman” but, also, nuanced, objective and scientifically sound. If his fellow Leftist scientists and commentators quoted on its Amazon page are to be believed, then Adam Rutherford [Tweet him]’s new book, Control: The Dark History and Troubling Present of Eugenics, has accomplished this task. According to TV scientist Prof. Alice Roberts [Tweet her], Control is “weighty and serious but accessible and perfectly pitched,” while for journalist Alex Preston [Tweet him], it is “breathtakingly brilliant and dark, a popular science book that doesn't talk down to you.” Actually, the book is OK, well written if not very original, up to a point. That point is when Rutherford’s emotions, arguably driven by his alienation as a mixed-race child of immigrants, take over and cause him to join in the intensifying Woke War Against Science.

For the most part, Control is an introduction to the history of “eugenics.” It explains that from the mid-nineteenth century until about the mid-twentieth century, there was a significant movement in Western countries that favored policies to improve the genetic stock of populations so they would become more intelligent, more pro-social and healthier.

There was also concern, especially among scientists such Francis Galton and Charles Darwin, about “dysgenics.” Prior to the Industrial Revolution, social class was correlated with fertility, child mortality was approximately 50%, and so the genetically sick, and those with low intelligence and poor moral character (correlates of low socioeconomic status), were purged every generation. But, despite its reputation, the Industrial Revolution, and especially the rise of inoculation against killer childhood diseases, created easier conditions and, thus, dysgenics. This risked the breakdown of civilization, in the view of the early eugenics advocates.

By 1900, eugenics was massively influential among Western elites. Conservatives such as former Prime Minister Arthur Balfour perceived it as a means of creating a great people. Leftists regarded it as a means of reducing suffering, and some of the most vocal advocates of eugenics were committed leftists—George Bernard Shaw, H.G. Wells. Opposition came from conservative traditionalists, such as G.K. Chesterton, who felt that eugenicists were playing God [Eugenics and the Left, by Diane Paul, Journal of the History of Ideas, 1984].

Laws were passed in various countries, some not revoked until the 1970s, allowing the sterilization of “mental defectives” and, in some cases, encouraging those considered of good “quality” to be more fecund.

It is at this point, however, that Rutherford’s historical scholarship starts to go awry. Rutherford asserts that “Winston Churchill was a key driver of eugenics policy in the UK in the first decades of the twentieth century.” There is something of reappraisal of Winston Churchill occurring in the U.K., with Leftists increasingly attacking his “hero” status and arguing that he was “racist.” Rutherford appears to have been drawn into this emotional revulsion against the embodiment of the old, pre-Multiculturalism Britain and has, thus, lost his critical faculties on this point.

In fact, other than separating males and females in asylums to avoid pregnancy, Britain did not have a “eugenic policy.” No eugenics laws were passed in Britain (something which Rutherford concedes later in his book).

Worse still, Rutherford tells us: “The toxicity of the idea of eugenics no doubt emerged from our collective discovery of the horrors of the Second World War.” There is, indeed, a popular belief that the association between Nazism and eugenics is the reason why it is now taboo. However, this is simply inaccurate.

As Daylanne English [Email her]has argued in in her book Unnatural Selections: Eugenics in American Modernism and the Harlem Renaissance, it was the Great Depression that started to make eugenics less popular. The reason: “it was clearly an external force” and “many middle—and even upper-class individuals were adversely affected.” It “forced many eugenics advocates to realize that unemployment did not necessarily signify ‘individual weakness.’”

Then, as English psychologist Richard Lynn has argued in his book Eugenics: A Reassessment, the individualistic, egalitarian, pro-equality, harm-avoidance-focused culture that commenced in the 1960s made eugenics increasingly taboo.

“Nazi eugenics” is plainly a post hoc justification. For Rutherford to simply assume otherwise is less than impressive historical scholarship.

In terms of exploring the science of eugenics, Rutherford does make some good points. Gene editing, focusing on specific genes, may have unpredictable effects when lots of genes must work together to create certain desirable traits. Moreover, increasing one trait—for example, intelligence—may result in us becoming worse in another trait. As F. Roger Devlin has put it, in reviewing my book Sent Before Their Time: Genius, Charisma and Being Born Prematurely,

A person ignorant of viticulture would probably assume that the best wine would be produced by the best soils. In fact, when vines are planted in especially rich soil, the result is an enormous profusion of leaves and very few grapes. High-quality wine grapes are grown in relatively weak—but not too weak—soil: it is precisely the vine’s struggle against a suboptimal environment which brings out the best in grapes.

Similarly, the complex processes that have led to us reaching this stage of our evolution may go wrong, indeed likely will, if we attempt to make simplistic interventions.

But Rutherford’s definition of “eugenics” is extremely tendentious, seemingly to avoid the counterargument that eugenics critics are just hypocritical virtue-signalers.

Eugenics is defined by the OED as “the study of how to arrange reproduction within a human population to increase the occurrence of heritable characteristics regarded as desirable.”

This being so, if you abort a child with Down’s Syndrome, or any physical or mental defect, you are engaging in “negative eugenics”: eliminating the unfit. Conversely, if you find the qualities of intelligence, moral character, and beauty (a proxy for genetic health) attractive in a partner, and breed with that partner, you are practicing “positive eugenics.” If this was how your parents felt about each other, you are product of “positive eugenics.” If, like Adam Rutherford, you are half-Indian (indeed your mother’s maiden name is Sitaram, part of the high caste Kalingi), then you are a product of many generations of deliberate eugenics.

To get round this problem, Rutherford redefines “eugenics” as being “designed to sculpt society through selective breeding,” i.e., creating a centrally planned “Brave New World,” contrasting this with “medical interventions designed to offer options to parents, enabling them to make choices about the medical health of lives they may want to bring into the world.”

However, surely, even being offered these “choices” cannot be divorced from promoting “desirable characteristics.”

But the most obvious problem with Rutherford’s book is that he has tremendous trouble even trying to seem objective.

Rutherford is still seething against those who attended the “London Conference on Intelligence,” which took place at University College London between 2015 and 2017 and was smeared as a “eugenics conference” despite definitive proof it was no such thing [Communicating Intelligence Research, by Michael Woodley of Menie et al., Intelligence, 2018]). Rutherford was part of the Woke mob that suppressed the conference, telling the rabidly CultMarx London Guardian newspaper that the views of certain participants were “deeply obnoxious…pseudoscientific nonsense,”

He unnecessarily uses his book as a means expressing how he feels, as a kind of therapy. He is simply unable to discuss this conference, which I attended, in a dispassionate way. Thus the attendees, who included a number of senior academics, are referred to variously as “fringe, race-obsessed cosplayers,” “controversial science hobbyists and racists,” “self-styled heretics and racist fools” (I get the impression this is a reference to my podcast “The Jolly Heretic”), and as “a small cabal of researchers, writers and oddballs for whom race and eugenics are the enduring passion of their lives.”

Emotion is the enemy of scholarship, and it is difficult to produce quality scholarship—or even sufficiently objective popular science—when you have strong negative feelings about the subject matter, cognitive dissonance in relation to it (being a product of eugenics yourself) and a deep loathing for some of the scientists about whom you need to be objective.

Which makes Rutherford’s book, although it makes some good points, just part of the extraordinary reversal of the Scientific Revolution that is now leading us to a new Dark Age.