Richard Lynn On A Century of IQ In Britain And The U.S. 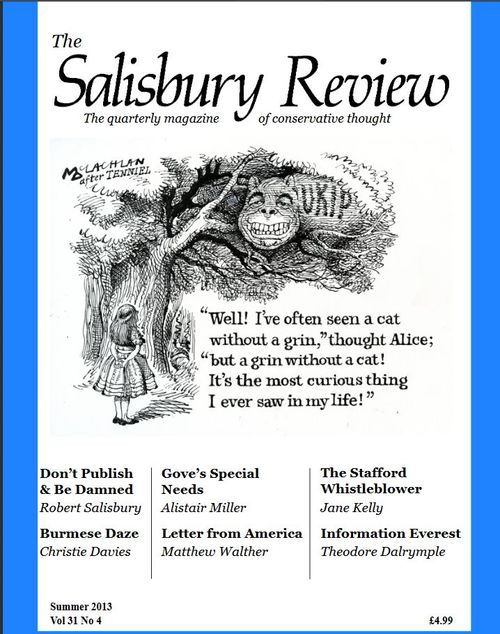 [This article appears in the current, Summer 2013 issue, of the U.K. quarterly magazine Salisbury Review]

The intelligence quotient or, to give its popular acronym, IQ, has now achieved its centenary. This measure of our thinking, problem-solving, learning and memory abilities was devised in 1912 by Wilhelm Stern, a professor of psychology at the University of Breslau, now Wroclaw in Poland.

Stern’s IQ scale was constructed with the average set at 100, and with a range from zero to about 200. Approximately 96 per cent of people have IQs between 70 and 130, with about 2 per cent below 70 and 2 per cent above 130. People with IQs below 70 have some degree of learning difficulty, but most of these have IQs between 50 and 70 and function reasonably well performing undemanding jobs.

About one person per 1,000 has an IQ of 145 and above, and IQs higher than 160 are possessed by only approximately one person in 30,000. An IQ of 200 is about the highest ever recorded and is very rare. It has been estimated that this IQ was possessed by Francis Galton, Blaise Pascal and John Stuart Mill.

During its hundred-year existence, it has been found that our IQ affects our life in a number of important ways. It is a significant determinant of how well we do at school and in further education, our income, occupation, health, life expectancy, and of our choice of friends and partners.

In the early years of the twentieth century, attitudes to the IQ assumed a political dimension. The Liberal-Left generally approved of the IQ and research showing its importance. One of the most salient issues was the discovery that intelligent women were having relatively few children and the inference that was drawn from this that the IQ of the population was deteriorating. In many countries eugenics societies were established to promote ways to reverse this.

The principal supporters of eugenics came from the Liberal-Left. In Britain they included H.G. Wells, Sidney and Beatrice Webb and George Bernard Shaw. The programs they advocated were the provision of financial incentives for those with high IQs to have more children, designated positive eugenics, and measures to reduce the numbers of children of those with low IQs, designated negative eugenics.

In the United States and a number of countries in continental Europe, the principal of these negative eugenics measures was the sterilisation of the mentally retarded to prevent the birth of mentally retarded children. This was not introduced in Britain, but H.G. Wells in his book A Modern Utopia (1905) came up with the alternative of getting rid of them by dumping them on an uninhabited island.

In 1944, the IQ achieved a major political success in Britain with its introduction in the “Eleven-Plus” exam to select children with high IQs for “grammar schools” (=academic high schools).

This was initially welcomed by the Liberal-Left because it promoted the ideal of equality of opportunity. It enabled children from working class families who had high IQs to obtain a grammar school education and enter the middle and professional classes.

In the second half of the twentieth century, Liberal-Left opinion turned against the IQ. There were several reasons for this.

The Liberal-Left became more concerned with the promotion of equality of outcome which it advocated could be achieved if all children attended comprehensives. In Britain, the Liberal-Left implemented this agenda during the Wilson government of 1964-1970 when Shirley Williams, the Education Minister, closed down most of the grammar schools and replaced them with comprehensives. This programme was continued by the Conservative Party in the Heath government of 1970-1974—implemented by the education minister, Margaret Thatcher. By the end of the 1970s, in England only Kent and Buckingham retained grammar schools and the use of IQ tests in the Eleven Plus examination.

It was found that the IQs of identical twins are much more similar than those of non-identicals, and several studies found that even when identical twins have been brought up in different families, they have very similar IQs. The political implication of the strong genetic determination of the IQ is that it would be very difficult to reduce social inequalities, as those who are born with high IQs inevitably do better than those whose IQs are lower.

Even more disturbing for the Liberal-Left was the evidence of race differences in IQs. This was found first in the United States in 1918, when the IQs of conscripts were tested and it was found that blacks had an average IQ of 84 and whites an average IQ of 100. This difference has been confirmed in numerous studies and is still present today.

In 1994 Richard Herrnstein and Charles Murray argued in their book The Bell Curve that this IQ difference goes a long way to explaining why blacks do more poorly in education and employment, and have higher rates of welfare dependency and single motherhood.

The Liberal-Left has been further discomforted in the last decade during which IQs have been calculated for all nations and races and it has been shown that there are large differences between different peoples.

The Ashkenazi Jews have the highest IQ at an average of 110. This is one of the reasons that they are so successful and prominent in the professions, business and academia and as recipients of awards and prizes for outstanding intellectual work such as the Nobel Prize. For instance, in the United States Jews have been about three percent of the population during the last century and have won about a third of the Nobel prizes.

The Chinese, Japanese and other Northeast Asians have the next highest IQ at 105. This explains why Japan, South Korea, Taiwan and Singapore, have done so well economically during the last half century, and why China has achieved such high rates of economic growth in recent years since it has introduced a market economy.

The European nations have an average IQ of 100, which makes it difficult for them to compete economically against the Northeast Asians.

The lowest IQs are those of the Bushmen of the Kalahari Desert and the Pygmies of the West African rain forests at an average 53, and the Australian Aborigines at an average 62. IQs in sub-Saharan Arica are approximately 70 and this retards their economic development.

The calculation of IQs for all nations in the world has shown that IQ differences contribute significantly to differences in economic development and to our understanding of why some nations are rich while others remain poor.

For all these reasons, during the course of the century the IQ has changed from being a Liberal-Left to a “conservative” concept. Conservatives are neither surprised nor worried that their world views have turned out to be largely correct. People are born with unequal abilities, so some will do better than others, and there is nothing much that can be done about this.

Differences in IQs are the rock on which Liberal-Left ideals of a more equal world will inevitably founder.

Richard Lynn [Email him] is Professor Emeritus, University of Ulster, and the author of several books on IQ, including The Global Bell Curve, IQ and Global Inequality, and The Chosen People: A Study of Jewish Intelligence and Achievement, reviewed by Steve Sailer here.

His most recent book, written jointly with Tatu Vanhanen, is  Intelligence: A Unifying Construct for the Social Sciences.