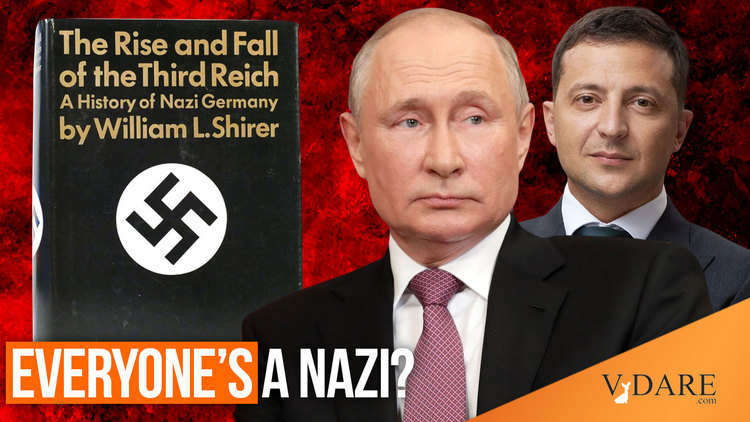 Some readers criticized my coming out as an isolationist in my February Diary. One got personal:

Mr. Derbyshire: If the U.S.A. had not gotten involved in the last big European war, you, as a native Brit, would be speaking German. You're welcome!

Here's the relevant passage from William L. Shirer's The Rise and Fall of the Third Reich. Shirer has just finished describing Hitler's address to the Reichstag on December 11th 1941. Then—

At this point the deputies of the Reichstag leaped to their feet cheering, and the Fuehrer's words were drowned in the bedlam.

Shortly afterward, at 2:30 p.m., Ribbentrop, in one of his most frigid poses, received Leland Morris, the American chargé d'affaires in Berlin, and while keeping him standing read out Germany's declaration of war, handed him a copy, and icily dismissed him.

If some similar scene is acted out in Moscow any time soon, then I shall support a general mobilization.

Until then, I'm an isolationist. Our country, the U.S.A.—my country for twenty years this coming April 19th—is the most remote, most secure in the world, the most difficult to overrun and occupy. We have plenty of business of our own to attend to; there is no cause to go interfering in other peoples' squabbles.

Our country might of course be annihilated by an almighty downpour of hostile ICBMs. However, the policy of Mutual Assured Destruction has prevented that for sixty years. I'll go on trusting to it until someone comes up with something better.

But pulling down my copy of Shirer's The Rise and Fall of the Third Reich from my bookshelf there stirred the memory of an incident seventeen years ago.

I was contributing random thoughts to the blog of National Review Online—"The Corner," it was called, and still is.

My house originally came with an unfinished attic. Back in 2005 I turned that attic into a study for myself. I posted some before—and—after pictures on my personal website. 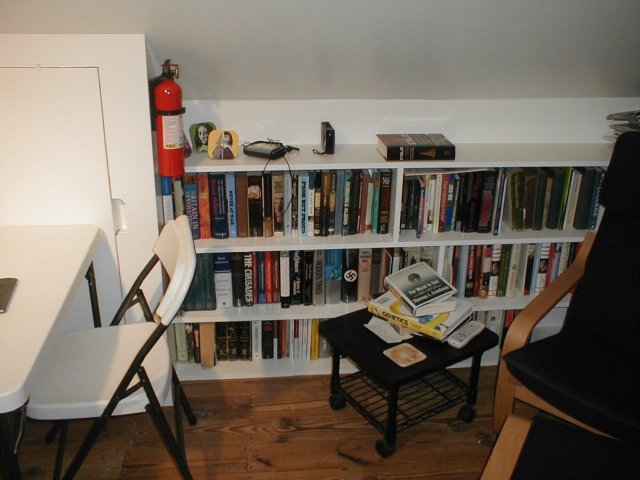 One picture showed a corner of the room with some shelves of books. One of those books, clearly visible in the middle of the picture, was The Rise and Fall of the Third Reich. It was the same edition I pulled down just now, the 1960 edition. The spine of the book's dust cover is all black except for the title, in small dark letters hard to make out, and a big white circle with a big black swastika in it. That was in plain sight right behind me in the picture I posted.

I knew of course about Leftists' obsession with the Third Reich, calling everyone who disagreed with them about abortion or capital gains tax a Nazi.

I was just a bit surprised to get the Nazi-Nazi treatment from National Review followers, although I suppose some Leftists read conservative blogs looking for thoughtcrime.

Shirer's book is a classic in its field, meticulously documented. Shirer was a seasoned American journalist of sensible opinions who was based in Germany from the early 1930s until he had to flee with the Gestapo at his heels in December 1940.

Well, that little incident on the blog was a reminder of how Nazi-obsessed great swathes of the Western public are. There are, I am sure, tens of millions of Americans for whom 20th-century history began in 1933 and ended in 1945.

It's the same in Britain, perhaps worse. The distinguished British historian Niall Ferguson wrote a scathing piece in the Financial Times twelve years ago about the teaching of history in British schools.

The selection of subject matter, Ferguson wrote, was "absurdly skewed." Referring to standard nationwide exams taken in secondary schools over there, the GCSE around age 15, the A-level at 17, Ferguson observed:

According to 2006 exam data, 51 per cent of GCSE candidates and a staggering 80 per cent of A-level candidates study the history of the Third Reich. As someone who wrote his D.Phil. thesis on inter-war Germany, I yield to no one in my respect for the historiography of Adolf Hitler's rise and fall. But there can be no justification for this excessive focus on the history of a single European country over a period of just a dozen years.

Ferguson did allow that British school history lessons sometimes glance at other topics. The Tudor monarchs get some coverage: hence his piece’s headline.

And then of course all the race and sex propaganda. Ferguson again:

When I asked them a year ago, all three of my children (aged 16, 14 and 11) had heard of the Rev Martin Luther King Jr., but none could tell me anything about Martin Luther.

It's therefore not very surprising, although it is depressing, to see that both sides in the Russia-Ukraine war are being described as Nazis.

On Wednesday this week our own beloved Senator Lindsey Graham, not to be out-Nazied, called for Putin's assassination, something he had previously done on Twitter without being banned in any way.

If John McCain were here, he'd be saying the same thing, I think. It's time for him to go. He's a war criminal. I wish somebody had taken Hitler out in the [1930s].

[Lindsey Graham doubles down on call for Vladimir Putin's assassination: 'I wish somebody had taken Hitler out', by Bryan Metzger March 16, 2022]

On the other side, scanning the transcript of Putin's speech, also on Wednesday (and remarkably difficult to find), I find six occurrences of the word "Nazi," all in reference to Ukraine:

So Vlad himself has been going full Nazi. It's truly international.

You might say that Russians have a license to throw around the word "Nazi," given that they suffered considerably under Nazi occupation in WW2. To which I'd reply that

I'm spitting into the wind, of course. The ruling classes, ours and Russia's and Ukraine's, will go on tagging dissenters from state dogma as Nazis; not because it makes any sense, but because they are mentally lazy and view the world in terms of simplified narratives.

It's useless to complain, but not illegal—yet.