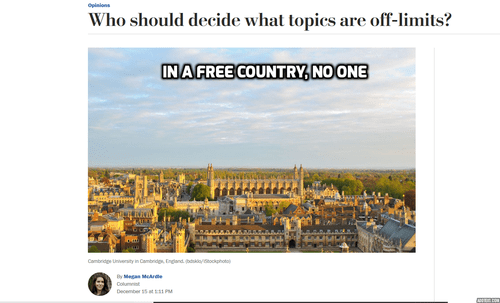 Medieval, a finishing school for the British aristocracy, site of numerous vital discoveries (IVF, the structure of DNA), you don’t get much more prestigious than Britain’s University of Cambridge. So imagine the Leftist gnashing of teeth when Noah Carl, a 28 year-old sociologist  who has argued in a high-impact journal that researchers must be allowed to discuss the relationship between “race” and “intelligence” [How Stifling Debate Around Race, Genes and IQ Can Do Harm, Evolutionary Psychological Science, 2018], was given a job there. Unfortunately, Establishment Right defenses of Carl’s academic freedom have been less the impressive. 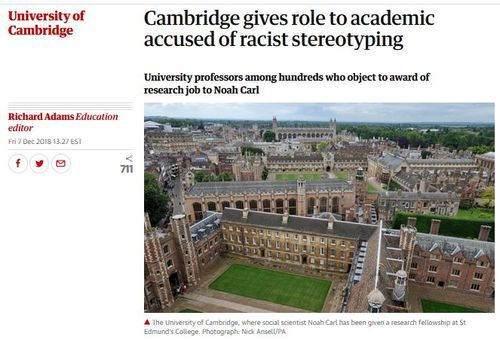 Carl has also published an article entitled  Net opposition to immigrants of different nationalities correlates strongly with their arrest rates in the UK, [Open Quantitative Sociology and Political Science, 2016]; spoken (though not on race) at the London Conference on Intelligence where fearless academics met up, beneath the radar, at University College London; and  signed a letter publicly defending the intellectual rigor of that conference. [Communicating Intelligence Research, By Michael Woodley of Menie et al., Intelligence, 2018]

In October, Carl was appointed Toby Jackman Newton Trust Research Fellow at St Edmund’s College, Cambridge. With an MSc and DPhil in Sociology from Oxford University and an impressive publication portfolio for one so young, in any free society such an appointment would be entirely unremarkable.

But Britain is not a free society. Its university campuses are increasingly akin to the Soviet Union. Comedians booked to entertain students on British campuses must sign contracts agreeing not to make jokes about a raft of subjects: nationality, sexuality, transsexuality, disabled people…[Comedian pulls out of charity show at SOAS after he was asked to sign extensive “safe space” contract, By Ella Wills, Evening Standard, December 11, 2018]

By November, word of Carl’s appointment had spread. Students bravely gave anonymous interviews to a student newspapers, complaining that St Edmund’s was being described “the college with the eugenics researcher.” A particularly pious SJW returned his funding rather than be associated with such a place. Carl’s elevation had led to a “packed” “emergency meeting” of the college’s student union.

St Edmund’s was pressured to launch an “investigation” [“He has been able to speak all his life.” For two weeks, Eddie’s students questioned Dr Carl’s appointment, By Noella Chye, Varsity, December 12, 2018,] into Carl’s appointment.

And to make sure St Edmund’s did launch this investigation, Cambridge Leftists went public: on December 7th , the front page of the London Times announced Cambridge dons revolt over ‘racist’ fellow’s role,  (by Catherine Lally & Rosemary Bennett). An Open Letter, signed by over 200 academics including 78 at Cambridge, and which anyone could sign online, demanded the inquiry.

“A careful consideration of Carl’s published work and public stance on various issues, particularly on the claimed relationship between ‘race’, ‘criminality’ and ‘genetic intelligence’, leads us to conclude that his work is ethically suspect and methodologically flawed,” the Open Letter opined. Signers were “deeply concerned that racist pseudoscience is being legitimized through association with the University of Cambridge”—meaning they had no interest, obviously, in whether or not Dr Carl’s findings were empirically accurate.

This fellowship was awarded to Carl despite his attendance at, and public defense of, the discredited “London Conference on Intelligence,” where racist and pseudoscientific work has been regularly presented.

It’s unclear who “discredited” it, but apparently if you’ve attended such a conference you should, therefore, be excluded from  academe.

Carl’s work has already been used by extremist and far-right media outlets with the aim of stoking xenophobic and anti-immigrant rhetoric…this kind of pseudoscientific racism runs the serious risk of being used to justify policies that directly harm vulnerable populations.

Open Letter: No Place for Racist Pseudoscience at Cambridge

Some U.K. newspapers reporting The Times’ article did suggest here might be something suspect about the petition: “The public condemnation comes amid increasing concerns about free speech on campuses” wrote the Mail Online [More than 200 academics sign open letter accusing Cambridge don of publishing “racist pseudoscience” in row over academic free speech, By Sami Quadri, December 7, 2018]

But Carl’s libertarian defenders could have been more effective.

Journalist Toby Young, whose attendance at the London Conference on Intelligence in 2017 led to its discovery by the Main Stream Media, did describe what was happening as an appalling “mobbing,” pointing out that the Open Letter presented no evidence of academic misconduct, and that few of the signatories seemed to actually be experts in science, with one of them, Professor David Graeber [Tweet him] merely asserting that Carl’s research is flawed because it draws upon the concepts of “intelligence”, “criminality” and “race” that he claimed were inherently flawed. Young finished with a link to pro-Carl petition, and defenses of him by various unbiased academics [Academics’ Mobbing of a Young Scholar Must be Denounced, Quillette, December 7, 2018.]

But Robert Verbruggen in National Review [Hundreds of Academics Attack Young Researcher,  December 9, 2018], while agreeing that Carl must be defended, empathized with those who reacted emotionally to the appointment: “After a quick Web search it’s really not a mystery why Carl is controversial.”

Of course, Carl’s work is “controversial” only to the kind of people who signed the petition: Leftist ideological thugs in university gowns, something Quillette and other Carl supporters really should have gone into a lot more.

More recently, Washington Post token libertarian columnist Megan McArdle [Tweet her]has complained about the abuse heaped on her by anti-Carl mobsters she questioned—but ends up concluding “research into race and IQ should stay off limits.” Some libertarian! [Who should decide what topics are off-limits?, December 15 2018].

The Open Letter’s lead signer does not even work at Cambridge. He is Professor Arjun Appadurai [Email him] an Indian cultural anthropologist based at New York University. Anthropology has become nakedly political, seeing its purpose as the empowering of the disempowered. Buried beneath its postmodern verbosity, truth is culturally subjective, environment is everything, and acceptable research involves someone observing pretty much any group of people they’re interested in and writing their feelings about it.

So the whole anti-Carl campaign has been spearheaded by an anti-science postmodernist, who may also be unable to treat Carl’s research objectively because he is non-white. Appadurai has spent much of his career looking at the supposed evils of “colonialism,” presumably including his own university education.

Appadurai is followed by David Roediger [Email him] of the University of Kansas, author of such tomes as Towards the Abolition of Whiteness: Essays on Race, Class and Politics. He is also a professor of “American Studies.”  If a subject includes the word “Studies” it will basically be Leftist ideology dressed-up as scholarship.

Third signer is David Graeber quoted above, a New York-raised anthropologist whose father was a member of the Young Communist League and who himself was a leading early figure in “Occupy Wall Street”.

Other signatories include mathematician Chandler Davis, born 1926, a former member of the Communist Party of America jailed for his subversive activities and non-cooperation with House Un-American Activities Committee in 1954 and who, as editor of the Mathematical Intelligencer, was influential in the suppression of a recent Math paper which looked into sex differences. [Academic Activists Send a Published Paper Down the Memory Hole, by Theodore P. Hill, September 7, 2018]

Going down the list, it is indeed clear that hardly any of the signatories are actually scientists who would have the training and knowledge to discern “flaws” in Carl’s work. Their PhDs in pseudo-subjects with no objective standards, such as English Literature. They are simply aggressive virtue-signaling postmodernists (in many cases non-white, as well) intent on bullying the new boy until hopefully, he cries.

How can such intelligent people behave like this? Being a Humanities type, in contrast to a science-type, is associated with high Neuroticism (feeling negative feelings, such as anxiety and hatred, strongly), low altruism, poor impulse control, and high “Openness”. [Personality and interests as predictors of educational streaming and achievement, By F. De Fruyt & I. Mervielde, European Journal of Personality, 1996] High “Openness” involves a relatively high placing on the schizotypy spectrum at one end of which is “schizophrenia” and at the other extreme of which is “autism”. [Mentalism and Mechanism, By C. Badcock, Human Nature and Social Values, 2003]

Autism involves an obsession with systematizing but poor empathizing, hence it is associated with the best scientists [See The Genius Famine, By Edward Dutton & Bruce Charlton, 2015]. Schizophrenia involves such extreme empathy that you are obsessed with people’s feelings and read far too much into cues of them, meaning you see paranoid conspiracies everywhere. You are very bad at systematizing, so your worldview will tend to be, empirically, nonsense. If you add to this the Humanities scholar’s high anxiety (meaning you desperately need a clear world view) and his being aggressive and unkind, then you have precisely the pseudo-intellectual bullies who have signed the anti-Carl petition.

These bullies’ hatred of Dr Carl goes well beyond his ideological non-conformity. Dominic Caddick, who describes himself as “Left economics student @ Cambridge,” snarked on Twitter:

Not surprising to see Toby Young behind [the pro-Carl petition], maybe he has an affinity for people who bluff their way into Oxbridge? Should we bring up Noah Carl’s parents are both academics here.

Carl’s father is Princeton-educated Peter Carl who was Professor of Architecture at Cambridge until 2009 while his mother is Mary Ann Steane, currently a Senior Lecturer in Cambridge’s Architecture Department.

In other words, Caddick hates Carl because he believes he is a product of nepotism. If Carl is not, of course, then it implies that intelligence may be strongly genetic among individuals and races—probably, from Caddick’s point of view, even worse!

And there is another interesting aspect to Carl which hasn’t been remarked upon in the MSM. In its December 7 piece, the Mail Online noted that: “In pictures on his Facebook profile [specifically his “Cover Photo”], Dr Carl is seen practising yoga in stone circles with a young boy.” What it omitted is that this “young boy”, whom Carl has his arm round in one photo in the montage, is, from the look of him, a White-East Asian mixture.

The boy is, presumably, either a relative or the son of a close friend. If “actions speak louder than words” (which they don’t only in the world of SJW self-righteousness and hypocrisy) Carl is clearly no “racist.” He goes where the data takes him, but he treats people according to “the content of their character.”

St Edmund’s College needs to realize that universities don’t remain “prestigious” forever. They rise and fall based on the class of students they attract and the importance of the research they publish. Genius research is published by those who autistically go where the data goes and don’t think about people’s feelings: it was Francis Crick, just such as a person, co-discovered the structure of DNA at Cambridge. Get taken over by dogma and you’ll go into decline, like the University of Baghdad, once the greatest in the world.

Every single person who signed the anti-Carl petition is Hell-bent on making Cambridge University more like the University of Baghdad and, in shutting down free speech, making Britain more like an Islamic state.

These Neurotic quasi-schizophrenics are the enemies of civilization.

In January, when the “investigation” is complete, we’ll know if the authorities of St Edmund’s College, Cambridge—specifically its Master, Matthew Bullock [Email him]—should be added to the Open Letter’s handily available list of signatories.

I don’t think much of Megan McArdle either.