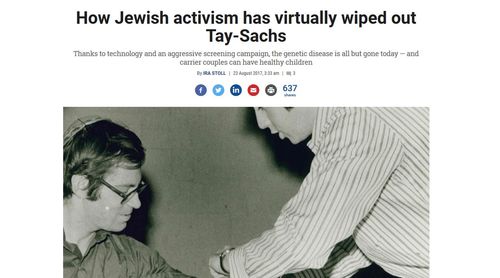 We are constantly lectured that eugenics is anti-Semitic pseudo-science. So even I was kind of surprised to read this article from the Times of Israel about how successful the seeming eugenic campaign against Tay-Sachs disease has been:

How Jewish activism has virtually wiped out Tay-Sachs

Thanks to technology and an aggressive screening campaign, the genetic disease is all but gone today — and carrier couples can have healthy children

There used to be an entire hospital unit — 16 or 17 beds at Kingsbook Jewish Medical Center in Brooklyn — devoted to taking care of these children. It was often full, with a waiting list that admitted new patients only when someone else’s child had died.

But by the late 1990s that unit was totally empty, and it eventually shut down. Its closure was a visible symbol of one of the most dramatic Jewish success stories of the past 50 years: the near-eradication of a deadly genetic disease.

Generally speaking, I’ve always been more or less anti-eugenics on the whole, but it’s hard for me to object too much to this impressive accomplishment against a terrible disease afflicting children.

Since the ‘70s, the incidence of Tay-Sachs has fallen by more than 90 percent among Jews, thanks to a combination of scientific advances and volunteer community activism that brought screening for the disease into synagogues, Jewish community centers and, eventually, routine medical care.

Until 1969, when doctors discovered the enzyme that made testing possible to determine whether parents were carriers of Tay-Sachs, 50 to 60 affected Jewish children were born each year in the United States and Canada. After mass screenings began in 1971, the numbers declined to two to five Jewish births a year, said Karen Zeiger, whose first child died of Tay-Sachs.

I’m struck by how close a coincidence there was in time between the start of the anti-Tay-Sachs campaign in 1971 and the beginning of the campaign by 1970s Jewish intellectuals like Stephen Jay Gould to demonize old-time pro-eugenics WASPs like Francis Galton as proto-Nazis. It’s almost as if one was a distraction away from the other …

“It had decreased significantly,” said Zeiger, who until her retirement in 2000 was the State of California’s Tay-Sachs prevention coordinator. Between 1976 and 1989, there wasn’t a single Jewish Tay-Sachs birth in the entire state, she said. …

Before screening, couples in which both parents were Tay-Sachs carriers “almost always stopped having children after they had one child with Tay-Sachs, for fear of having another,” Ruth Schwartz Cowan wrote it in her book “Heredity and Hope: The Case for Genetic Screening.”

But with screening, Tay-Sachs could be detected before birth, and “carrier couples felt encouraged to have children,” she wrote. …

Romer and others involved with this issue stress the importance of screening interfaith couples, too. Non-Jews may also benefit from pre-conception screening for Tay-Sachs and other diseases. Some research indicates, for example, that Louisiana Cajuns, French Canadians and individuals with Irish lineage may also have an elevated incidence of Tay-Sachs.

Scientific progress means that Jews can now be screened for over 200 diseases with an at-home, mail-in test offered by JScreen. The four-year-old nonprofit affiliated with Emory University’s Department of Human Genetics has screened thousands of people, and the subsidized fee for the test — about $150 — includes genetic counseling.

While some genetic tests are standard doctor’s office procedure for pregnant women or couples trying to get pregnant with a doctor’s help, JScreen aims for pre-conception screening. The test includes diseases common in those with Ashkenazi, Sephardi, and Mizrahi backgrounds as well as general population diseases, making it relevant for Jewish couples and interfaith couples.

“Kaback and his colleagues could well have stopped there,” she wrote. “But they did not. There is one more figure, the one that matters most and that goes the furthest in explaining why Ashkenazi Jews accept carrier screening… after monitoring with pre-natal diagnosis, 2,466 ‘unaffected offspring’ were born” to parents who were both Tay-Sachs carriers.

On the other hand, this article isn’t wholly financially disinterested, so I dunno …

This article was sponsored by and produced in partnership with JScreen, whose goal of making genetic screening as simple, accessible, and affordable as possible has helped couples across the country have healthy babies. To access testing 24/7, request a kit at JScreen.org or gift a JScreen test as a wedding present. This article was produced by JTA’s native content team.

Is this an example of eugenics?

I could see creating another term like “anti-dysgenics” for programs aimed at countering tragic birth defects like this rather than improving upon okay genes. But, obviously, it’s all pretty blurry. Plus, I’m not aware that term exists.