The Return Of Eugenics—Or Something 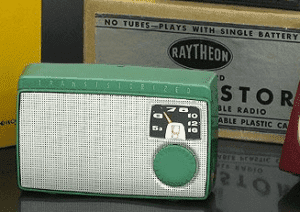 [Adapted from the latest Radio Derb, now available exclusively on VDARE.com (the transcript is now up.)]

What a technologically tremendous time we've been living through this past few decades! That thought was inspired by the death last week of Andrew Grove, former CEO of Intel Corporation, and a key player in the computing revolution of the past half-century.

I made my living for thirty years in Big Iron, the grand old mainframe computers of the seventies, eighties, and nineties. Software was my trade; I didn't engage much with hardware. You couldn't help but brush up against some of the developments, though, if you lived through those decades.

A memory: When I was a kid, there was a lad my age in the street whose parents spoiled him rotten. He always had the latest toy or gadget. I think every street has one of these when you're a kid. Well, at some date in the late 1950s this boy showed up holding a fancy blue box the size of a dictionary that played music without being plugged into anything! "It's a transistor radio," he announced smugly. We were suitably impressed, as we digested our wormwood and gall.

William Shockley was getting the Nobel Prize around the same time—sixty years ago this year—for having invented the transistor (along with Bardeen and Brattain). Later in Shockley’s life, through the 1970s and 1980s, when he himself was in his sixties and seventies, Shockley got interested in genetics. He took up the idea, which has been lying around since the 19th century, and which was illustrated very hilariously by the 2006 movie Idiocracy, that our easy-living modern societies are dysgenic: that is, they dis-courage breeding by smarter, healthier, better socialized people and en-courage breeding by dumber, sicker, more dysfunctional folk.

The opposite of "dysgenic" is "eugenic."

I shall pause briefly while you scream, jump on a kitchen chair, and clutch your skirts. … OK, end pause. That's what you're supposed to do when you hear the word "eugenics." It's a hysteria word.

Over to the London Spectator magazine, a perfectly respectable organ—notwithstanding the fact that I used to write for it—much favored by pallid, pipe-smoking Church of England clergymen in sleepy English villages. The crossword, by the way, is exceptionally challenging.

There's an article dated April 2nd on the Spectator website (by Spectator editor Fraser Nelson) titled The Return of Eugenics. Subtitle: "Researchers don't like the word—but they're running ahead with the idea, and Britain is at the forefront."

Well, it's nice to see the old country taking the lead in something. The main subject here is of course designer babies. As I wrote in VDARE.com back in February:

It is already the case today that no-one in a First World country need give birth to a Down Syndrome child, unless she wants to. If my knowledge of current science is correct, it will be the case ten years from now, perhaps less, that no First-Worlder will need to give birth to a stupid child unless she wants to; or an ugly child, or an un-athletic or un-musical child, or an antisocial child.

These new techniques neutralize the moral problem. If you're fertilizing twenty eggs, then picking the one you want and throwing away the rest, people will say you're destroying human lives. If you're just fertilizing one egg, then diddling with its genes to improve the health of the person it will become—or the beauty, or the intelligence, or the musical ability of that person—why is that morally worse than taking out someone's appendix, or giving them cosmetic dentistry?

This is the world we're sailing into. If the word "eugenics" gives us the heebie-jeebies, we'd better just change it for another word. Whatever word we use, the thing is what we're doing, and will be doing more and more of.

And the core issue with eugenics is the same one it has always been: the issue of human liberty. Is this world we're sailing into one where we freely choose whether, or how, to edit our offspring? Or a world where governments force us to?

And then, if Country A sticks with liberty while Country B goes for coercion, will country B thereby gain some geopolitical advantage over country A?

Or, if the best gene-editing techniques turn out to be really expensive, will the rich edit themselves up into a superman caste while the rest of us slouch around with second-rate genes?

William Shockley, at any rate, seems to have stuck with liberty. His most controversial proposal was that non-taxpayers with an IQ below 100 would be paid if they voluntarily agreed to sterilization—a thousand 1972 dollars for each of their IQ points under 100.

You may think that's loopy, but it's still voluntary.

I can't leave the topic of eugenics without a footnote on the quantity of nonsense talked about it. A good primer is my April 2013 review of John Glad's book Future Human Evolution here on VDARE.com.

Sample quote: "Hitler was hardly more of a eugenicist than his ideological enemies.”

Hitler doesn't in fact seem to have been especially keen on eugenics for a man of his time. The word "eugenics" doesn't show up in the index of Mein Kampf at all. A lot of Hitler's contemporaries from everywhere on the political spectrum, from Bertrand Russell on the left to Winston Churchill on the right, were more enthusiastic. Germany's compulsory sterilization law was drafted before the Nazis came to power … and so on.

Most of what most people think they know about eugenics is wrong.

OK, you can come down off that kitchen chair now.