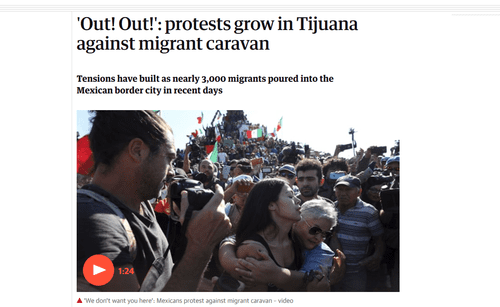 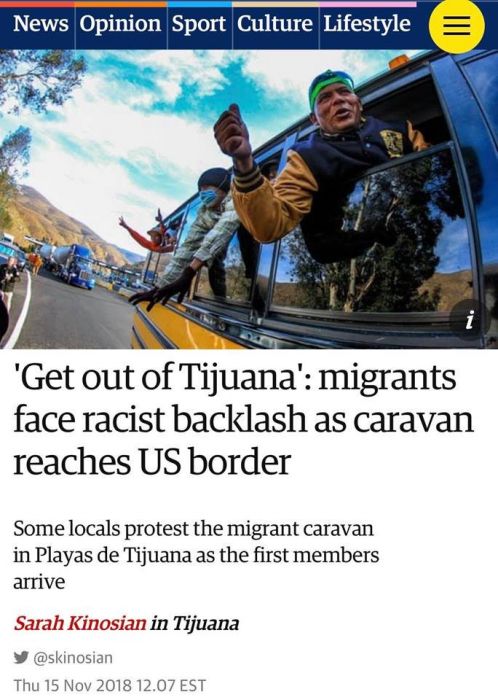 Things are really heating up in Tijuana, across the border from San Diego: the Central American caravan is provoking angry protests and even an attempt to storm a “migrant shelter”. [Mexicans Storm Migrant Shelter in Tijuana, Shouting for ‘Pigs’ to Leave, by Jason McGahan, Daily Beast, November 18, 2018] The critical question: will the Trump Administration react as strongly when the caravanners try to get into the U.S.?

Tijuana residents fear that, as has happened before, many of these Hondurans may get trapped in Mexico and stay in Tijuana. This explains their reaction as compared to that in central and southern Mexico, where the caravan was helped along its way by local authorities, who provided them transportation so they would continue on their way northward. But Tijuana is the end of the road. It's as far as the caravan can go and still be in Mexico. And interestingly, many of the arguments the Tijuana demonstrators are using are the same as those Americans used who criticize illegal immigration:

Hundreds of Tijuana residents congregated around a monument in an affluent section of the city south of California on Sunday to protest the thousands of Central American migrants who have arrived via caravan in hopes of a new life in the U.S. Tensions have built as nearly 3,000 migrants from the caravan poured into Tijuana in recent days after more than a month on the road, and with many more months ahead of them while they seek asylum. The [Mexican] federal government estimates the number of migrants could soon swell to 10,000...On Sunday, displeased Tijuana residents waved Mexican flags, sang the Mexican national anthem and shouted "Out!" Out!".... They accused the migrants of being messy, ungrateful and a danger to Tijuana. They also complained about how the caravan forced its way into Mexico, calling it an "invasion". And they voiced worries that their taxes might be spent to care for the group. "We don't want them in Tijuana," protesters shouted.

And from the Daily Beast report cited above (emphases added):

Young men in the crowd overturned concrete barriers set in the road for crowd control and threw plastic bottles and trash at a line of helmeted police with riot shields. Some got close and hurled insults and profanities at the police, calling them anti-patriotic for protecting the migrants, whom they variously referred to as drug addicts, thieves, gang members—even rapists and murderers. It's the same rhetoric used by President Trump about the caravan during the run-up to the 2018 midterm elections. "You're unpatriotic to be protecting a bunch of drunks and meth-heads, stoners and drug addicts," one man shouted at officers.....

The mayor of Tijuana has called for a referendum in Tijuana to decide if the migrants can stay or not.[Analiza Tijuana consulta para decidir destino de migrantes, by Arturo Salinas, Excelsior, November 16, 2018]

(Wow, could Americans have a referendum too?)

As I’ve said many times, Hispanics are not a monolith.

Guarded by police officers, the men, women and children of the gathering caravan marched through San Salvador’s streets to Guatemala-bound buses, loaded with heavy backpacks, water and the knowledge of an arduous 2,700-mile (4,300-km) trek ahead to the U.S. border.

The group from El Salvador was at least the fourth caravan to set off since a first, large-scale mobilization in neighboring Honduras

Of course, caravan migrants are still a fraction of the overall number of illegals. The “Trump Effect” has worn off. Trump has simply not secured the border. He better get serious and do it if he wants to be reelected.

But the migrant caravans pose a special danger due to their organization and publicity. It they can get illegals into the country by abusing the asylum process and availing themselves of Main Stream Media propaganda, it will inspire thousands more to make the journey.

Trump is being tested. I hope, for America’s sake, that he can pass the test.

Latin Americans respect strength. (I speak as a long-time resident of Mexico). Decades ago, they figured out that we weren’t going to protect our border and they’ve taken advantage of us ever since. So this Caravan thing may be the moment of truth.

Consider the boastful words of Univision reporter Pedro Ultreras (photo here), a Mexican who has spent the last few decades in the U.S. Accompanying the caravan, Ultreras was swelling with pride as he boasted of the caravan’s power back in October:

“There is no way to describe what is occurring today in Mexico. Never in the history of Latin America has there been an exodus of this magnitude. Nearly 10,000 migrants, the great majority from Honduras but many more have joined from other Central American countries. “ [Pedro Ultreras tweet, October 21, 2018]

Look at those photos of the caravan migrants—they don’t look like emaciated, starving people. They come as conquerors, and they don’t fear Trump.

The caravans also prove that the Mexican federal government is unable and/or unwilling to stop the Central American invasion.

Mexico is not our “partner” in border security. The Mexican government (under whatever political party) is not going to help us on our southern border and is not going to seal its own border with Guatemala just because we want it to.

Current president Enrique Pena Nieto is almost out of office. Why would he want to stop them?

As for Andres Manuel Lopez Obrador (“AMLO”), Mexico’s president-elect, set to take office December 1st, on a visit to Chiapas, he promised to grant Mexican work visas to Central American migrants: “There is going to be work for Mexicans and for Central Americans in our fatherland, in our country” [Migrantes cuentan con nosotros, afirma López Obrador, (Migrants can count on us, affirms Lopez Obrador) Notimex on El Siglo de Torreon, October 21, 2018]

Shouldn’t AMLO make sure that Mexicans have jobs before Central Americans do? Maybe that’s why Tijuana residents are so angry.

And AMLO has repeated his proposal (about which I’ve written before) of a sort of Marshall Plan for Central America. As AP’s Mark Stevenson reported:

Mexican President-elect Andres Manuel Lopez Obrador suggested Sunday [October 21] that the United States, Canada and Mexico work out a joint plan for funding development in poor areas of Central America and southern Mexico. “In this way we confront the phenomenon of migration, because he who leaves his town does not leave for pleasure but out of necessity,” said Lopez Obrador….[Caravan of migrants grows ahead of push into Mexico, October 23, 2018] Mexicans and Central Americans regard migrating to the U.S. as their unalienable right. And it will be, as long as we fail to stop them.

Now, Trump has sent soldiers to the border, where they are laying down concertina wire. [US troops lay down barbed wire along border ahead of caravan, By Eileen AJ Connelly, New York Post, November 3, 2018]

As an Iraq veteran, I applaud deployment of the military to the border. But the military has to be used as part of a unified plan.

After all, what is the purpose of the military? Is it not to protect the United States? Does not the Constitution say, in Article IV, Section 4, that “The United States shall guarantee to every State in this Union a Republican Form of Government, and shall protect each of them against Invasion….”?

We are already paying the monthly salaries of all our soldiers, airmen, sailors and marines. We’re already paying for their equipment, their vehicles, their weapons, etc. They are already being moved about from place to place for training within U.S. territory (not to mention costly foreign deployments).

So why not spend that money in protecting our border?

I was deployed to Iraq in 2005. We did a good job of securing our bases. As I wrote later:

“…at the height of the U.S. occupation of which I was a small part, I saw firsthand the enormous investment the United States government made in Iraq. Whatever was needed for the mission was provided. The U.S. government sent the manpower, the weapons, the vehicles, the equipment — it was all brought in, obtained there or constructed if necessary. Although besieged by insurgency, the U.S. was able to maintain an enormous occupation in the Middle East, thousands of miles away, for years. Why can’t it secure its own border with Mexico?”

Reminiscing about Iraq ...and wondering about our own border, The Social Contract, Fall 2014

What about crime and the caravan? Remember how Trump was bashed when he said that criminals were among the caravan marchers? [‘Criminals?’ Hardly. That’s Who the Caravan Flees, By Victoria Sanford, New York Times, November 9, 2018]

What would you expect? The Central American countries of Guatemala, Honduras and El Salvador are some of the most violent countries in the world, with higher murder rates than Mexico. (See my Comparing Mexico's Murder Rate to Others in Latin American, Mexidata, January 29, 2018.)

Any large group of random people from there is bound to have some criminals.

They come from the most violent countries in the world…They are invading our country, they are just not wearing uniforms.

For decades America’s Ruling Class has allowed this mass defiance of our laws. It’s not going to be easy to stop it.

But it must be done—or our country will cease to exist and will become a northern appendage of Latin America.

These caravans are an opportunity to get American’s attention. When you see a mass of people marching your way, it looks like an invasion. It is an invasion—but only a small part of a much greater one.

Over to you, President Trump. A nation turns its yearning eyes to you.