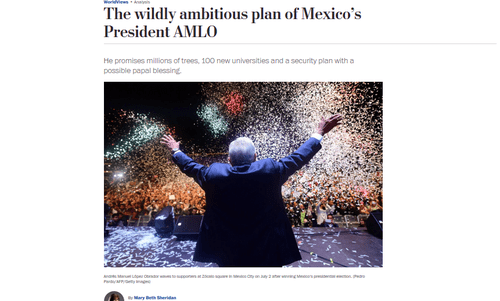 Mexico has a new president: Andres Manuel Lopez Obrador, commonly known as AMLO. His Leftist political coalition holds majorities in both houses of the Mexican Congress and hopes are high—not least among envious American socialists [Mexico in the Era of AMLO| In an inauguration ceremony unlike any other in Mexican history, Andrés Manuel López Obrador called neoliberalism a disaster. Now he must dismantle it, By Laura Carlsen, Jacobin, December 9, 2009]. But, not for the first time, a Mexican government is notably more cautious on immigration than activists’ rhetoric might suggest.  Mexican politicians know they are vulnerable to U.S. pressure. It’s up to the Trump Administration to apply it.

As AMLO proclaimed in his December 1  inaugural speech, he believes that his administration is to usher in the Cuarta Transformación—the “Fourth Transformation” of Mexico, a follow-up to what are generally regarded as the three previous transformations:

In the standard version of Mexican history, all three of these were positive but didn’t go far enough. In AMLO’s vision, Mexico’s Fourth Transformation will make the country more prosperous and egalitarian.

He calls for “Republican Austerity”—nothing to do with Paul Ryan’s obsessions, of course—cutting government costs and salaries, believing that the funds freed up by austerity and ending corruption will be channeled to Mexico’s needy multitudes and close gaps between rich and poor. AMLO also says he won’t increase Mexican debt and won’t raise taxes. [AMLO’s Republican Austerity Law bans pensions for ex-presidents, by Horacio Jiménez and  Alejandra Canchola, El Universal, September 13, 2018]

I wish AMLO well. But we Americans are going through our own Transformation, with the U.S. being transformed into a Third World racial socialist state which repudiates the old America.

So what about immigration? Can we expect an AMLO administration to continue Mexican meddling in our internal affairs?

AMLO blames Mexico’s problems on “neoliberalism,” by which he means pro-business policies enacted from 1983 to the present. He said that, “in Mexico, privatization has been a synonym of corruption.” (For example, after the “privatization” of Mexico’s telephone system, Carlos Slim became the richest man in the world.)

AMLO called for a new role for the state in bringing about social equality: “The State will attend to the reduction of social inequality, it will not continue putting social justice aside from the agenda of the government”.

At the same time, AMLO tried to reassure investors:

I pledge, and I am a man of my word, that the investments of domestic and foreign stockholders will be secure and conditions will be created to obtain good results, because in Mexico there will be honesty, the rule of law, clear rules, economic growth and confidence.

Sounds good.  I’m rather skeptical, however, that AMLO, or any other president of left, right or center is going to end Mexican corruption. It’s part of the culture.

AMLO gave a shout-out to his most prominent American guests and even spoke well of Trump himself:

…I appreciate the presence of Mr. Michael Pence, Vice-President of the United States and his wife Karen Pence. And I want to emphasize that, since the first day of July, since the day of my election, I have received respectful treatment from President Donald Trump, who I appreciate has sent, as a token of friendship, his daughter Ivanka to this ceremony. [Emphases added throughout]

Upon which Ivanka stood and waved.

AMLO pointed out the contribution of Mexicans in the U.S. to the economy of Mexico:

Our people are not lazy, nor slothful, nor indolent, on the contrary, we are one of the hardest-working societies in the world. For example, our fellow citizen migrants, who for necessity have gone to make a living in the United States, are now sending to their relatives $30 billion  annually. These remittances are the principal source of income of our country and the money is the biggest social benefit that we receive from abroad.

It’s actually not true that remittances form the biggest source of Mexican income. Automotive exports, for example earn more—because of NAFTA, which Trump is renegotiating.

But it is true that Mexico earns more from remittances than oil exports or tourism, and psychologically remittances are very important. This accounts for the hysterical reaction when a remittance tax proposal is brought up.

AMLO also spoke of economic development as a way of keeping Mexicans in Mexico:

We are going to boost productive projects with public and private investment/domestic and foreign, investment. These projects will create curtains of development from the south to the north of the country, to keep Mexicans in their places of origin. We want migration to be an option, not obligatory. We want Mexicans to have work, to prosper and be happy where they were born, where their families are, where their customs and cultures are.

AMLO spoke of his campaign proposal, on which I have reported before, of a big international development program

“…with the president of the United States and the Prime Minister of Canada I am speaking of going beyond NAFTA and achieving an investment accord among businesses and governments of the three nations, to boost the development of the Central American countries and also ours. This would be a way of confronting the migratory phenomenon, but not with coercive measures.”

You have probably guessed that the U.S. taxpayer would be paying for most of this development program. And in the meantime, would immigrants continue to arrive?

On his inauguration day, AMLO found time to meet with the presidents of Guatemala and Honduras, and Vice-President of El Salvador. They signed an accord, optimistically reported on in the U.S. media with some rather misleading headlines e.g.:

It’s actually a little more complex. The goal of the accord was

…to establish the basis of understanding to construct a Comprehensive Development Plan that would boost the development and opportunities of the region, contributing to the prevention of the migratory phenomenon and attacking its structural causes simultaneously.”

…the creation of a fund, with the fundamental objective of implementing the Comprehensive Development Plan that includes programs, projects and specific actions, resulting in the generation of jobs and the fight against poverty.

So it’s all conjectural. Except, of course, that the U.S. and Canada are supposed to pay for it.

On the evening of his inauguration, the new President delivered a speech in Mexico City’s Zocalo Plaza in which he made a whopping 100 promises. The promises are even numbered in the speech’s transcript on the presidential website. Discurso de Andrés Manuel López Obrador, Presidente de los Estados Unidos Mexicanos Mensaje a la Nación desde el Zócalo de la Ciudad de México Presidential website December 1, 2018

Promise #94 pledged a Mexican foreign policy based on “the self-determination of the peoples” and “non-intervention”. Does that mean AMLO won’t meddle in U.S. immigration policies?

Promise #94 included “respect for the rights of migrants, ours, Central Americans and those of all countries and continents”. A little vague?

Promise #95 was specifically about relations with the U.S. government, which are to be “respectful, mutually beneficial and neighborly.” OK….

It also says that the bilateral U.S.-Mexican relationship should be changed to one of “cooperation for development. To create jobs in Mexico and Central America, not coercive measures, is the alternative to migration.”

It’s another reference to the big development plan.

Oh, but look here. Promise #96 speaks of Mexico’s vast consular network north of the border, which almost nobody except us at VDARE.COM seems to care about:

As we promised, the 50 consulates that Mexico has in the United States are going to become advocates for the defense of migrants. We are going to defend the human rights of our fellow Mexicans.

AMLO says Mexico’s 50 consulates “are going to become advocates for the defense of migrants”. You mean they’re not already?

To me that sounds like Mexican meddling. We’ll see.

I wish AMLO the best in anything positive he can do for Mexico, although I wonder how the public will respond upon finding out that he hasn’t brought about his “Fourth Transformation”.

But, that’s between AMLO and Mexican citizens.

On immigration, the U.S. simply needs to get control of its own border, immigration and citizenship policies. At the end of the day, it doesn’t matter what occurs in Mexico or what the Mexican government does—as long as we have a patriotic government that does what it should to protect our sovereignty.