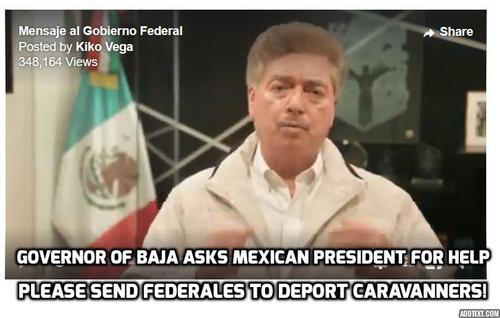 SAID IN SPANISH: Baja California Governor Wants Caravanners Deported! Hondurans And Salvadorans Don’t Trust Each Other!! (But It’s All Going To Be Great Once They Enter US!!!) ETC. [5 ITEMS]

Baja California is the long thin western Mexican peninsula state in which Tijuana is located. (VDARE.com Editor Peter Brimelow, back in 1995, suggested distraining on it instead of bailing out the Mexican banking system…again). As a result of the chaos in Tijuana, the state’s governor, Francisco Vega de Lamadrid, better known as Kiko Vega, has released a video imploring Enrique Pena Nieto, the current president of Mexico, to enforce the law.

"Señor President of the Republic, Enrique Pena Nieto, with the voice of Baja Californians, we respectfully request that orders be given that the Instituto Nacional de Migración  [Mexican immigration bureaucracy] do its job, so that these migrants obey our migratory laws and that those who violate the rules be immediately subject to the deportation process which they deserve.”

I reiterate to the Baja Californians that the priority of the state government is to safeguard the security and tranquility of those who live here, which is why we continue to call for the Federal Government to attend to this issue, which is its responsibility, since it is an immigration issue.

I don’t expect the Mexican President to do anything, as he is out of office on December 1st. He obviously wants to dump the problem on his successor, AMLO.

Mexico Complains Via Diplomatic Note About Tear Gas—Would They Prefer A Wall?

The Mexican government is complaining about the tear gas used by the U.S. on the border at Tijuana.

Of course tear gas is used to disperse crowds so more lethal weapons won’t have to be used. (Or we could build a wall!) But the Mexican government doesn’t seem to appreciate that.

The Mexican Foreign Ministry (SRE, for its initials in Spanish) quickly issued an official diplomatic note. From an SRE Communique:

Today the SRE presented a diplomatic note to the Embassy of the United States of America regarding the incidents occurring the 25th of November in the border zone of Tijuana-San Diego. The note requested the American authorities carry out an exhaustive investigation of the incidents in which non-lethal arms were utilized in the United States in the direction of Mexico.

(This takes a lot of gall. The whole reason for the melee on the border is that Mexico had allowed the Hondurans to enter Mexico illegally, traverse the length of the country, and then storm our border. And they’re worried about the tear gas?)

Mexico reiterates its commitment to continue protecting, at all times, the human rights and security of migrants.

(Once again: Mexico allows thousands of Central Americans—the Caravans are only a fraction of U.S. border crossers—to traipse across its territory in order to enter the United States.  But many Central Americans are badly mistreated in Mexico. Mexican authorities don’t really care about protecting them).

Finally, the Foreign Ministry emphasizes the interest of Mexico in maintaining close cooperation, in order to confront the migratory phenomenon in a joint manner and with a focus on shared responsibility.

There is NO “shared responsibility.” The U.S. has to get control of its border—NOW. We can’t depend on Mexico.

On November 25th, the very day of the melee at the border, the Honduran government released an official statement:

The government of Honduras calls on the countries of transit [Mexico] and destination [the United States], that they respect the human rights of Central American migrants, in accordance with international law…

(Do Central Americans have no responsibility to obey the laws and respect the interests of the other countries they march across?)

…prioritizing the superior interests of the children.

(Yes, it’s all about the children, isn’t it? They are a great prop for the media, aren’t they?)

We condemn the use of rubber bullets, attacking the integrity of the Central Americans, who are confronting a hostile, difficult and dangerous environment.

(Yes, well these Central Americans—and their enablers—put themselves in and provoked this “hostile, difficult and dangerous environment”).

…specifically on the border between Mexico and the U.S.

According to the World Bank (via GobalEconomy.com) remittances from Honduran migrants constitute (as of the end of 2017) 18.81% of the Gross Domestic Product of Honduras. So the Honduran government has a big motive to keep moving folks out of Honduras. 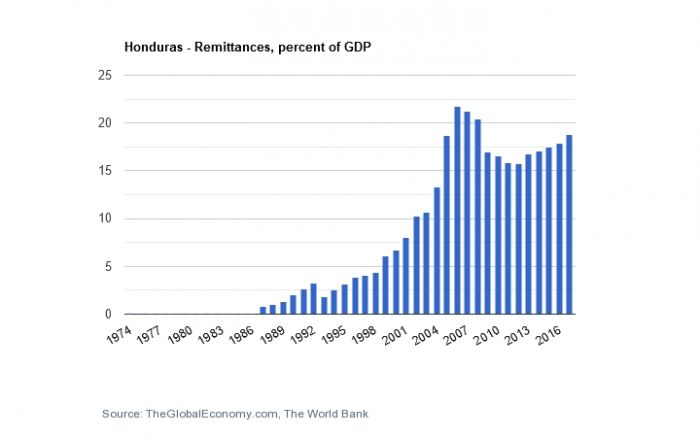 Even The Mexican Human Rights Commission Criticizes The Honduran Caravanners

Even Mexico’s National Human Rights Commission (CNDH for its Spanish name Comisión Nacional de los Derechos Humanos) has come out with a criticism of the conduct of Honduran border-crashers. From Milenio:

The National Human Rights Commission (CNDH) condemned the actions of the [Honduran] migrants this Sunday [November 25) at the San Ysidro Gate, asserting that they should reciprocate the Mexican society “which has extended its hand”.

We condemn the violent acts in the area of the San Ysidro-Tijuana border crossing. Our solidarity with the affected society of Tijuana, we reiterate that members of the migrant caravans should respect Mexican laws and observe correct conduct. November 26, 2:05

Hmm, would that also apply to the behavior of Mexicans in the United States? Just asking.

Friction Between Honduran And Salvadoran Caravanners On Mexican Soil

“Hispanics”–a category invented by the US Census—are not a monolith. Relations between Central American nationalities have not always been amicable. The Mexican media has reported friction between Honduran and Salvadoran caravanners on Mexican soil.:

The caravan of Hondurans who were waiting in Matias Romero, Oaxaca, to rejoin their fellow Hondurans to set out for the United States, rejected a caravan of Salvadorans who arrived to that municipio [sort of a cross between a city and county government], with the intention of continuing the trip together. They [the group of Salvadorans] were even threatened with being broken up if they tried to take control of the group.

Jairo Antonio Guevara, who was part of the El Salvador caravan, explained that when they arrived to the soccer stadium they were well-received. Nevertheless, later “they told us that the Salvadorans who stayed there at night were going to be broken up. So we…decided to leave. And [when we left] they closed the access gate,” reported Guevara.

The Salvadoran even got the impression that the Hondurans thought they were gang members…!!!

Among the Salvadoran caravan, interestingly, there is a group of Hondurans, “who have not been isolated due to their nationality”.

But the article’s very next paragraph indicates that might not actually be the case. It says that

…in this group, there have been robberies: the theft of money, cell phones, clothing and shoes.

That can’t be! We were sternly lectured by the Trump-bashing Main Stream Media not to worry about criminals in the caravans. [The Trump administration’s fuzzy math on ‘criminals’ in the caravan—Are there '300 criminals' in the caravan? | Fact Checker, By Glenn Kessler, Washington Post, November 9, 2018]

But I guess the Salvadorans didn’t get the memo and don’t trust the Hondurans travelling with them:

To avoid their few belongings being taken, the Salvadorans sleep over their backpacks, and take advantage of them to use them as pillows to rest their heads.

So Salvadorans and Hondurans don’t trust each other, even when they’re both out of their own countries and on Mexican soil.

But when they arrive to the United States, it’s all going to be great!

That’s what Magic Dirt is all about!