Earlier by Harri Honkanen: Muslim Grooming Gangs In Finland—Exposed, As In U.K., By “Right-Wing Extremists” 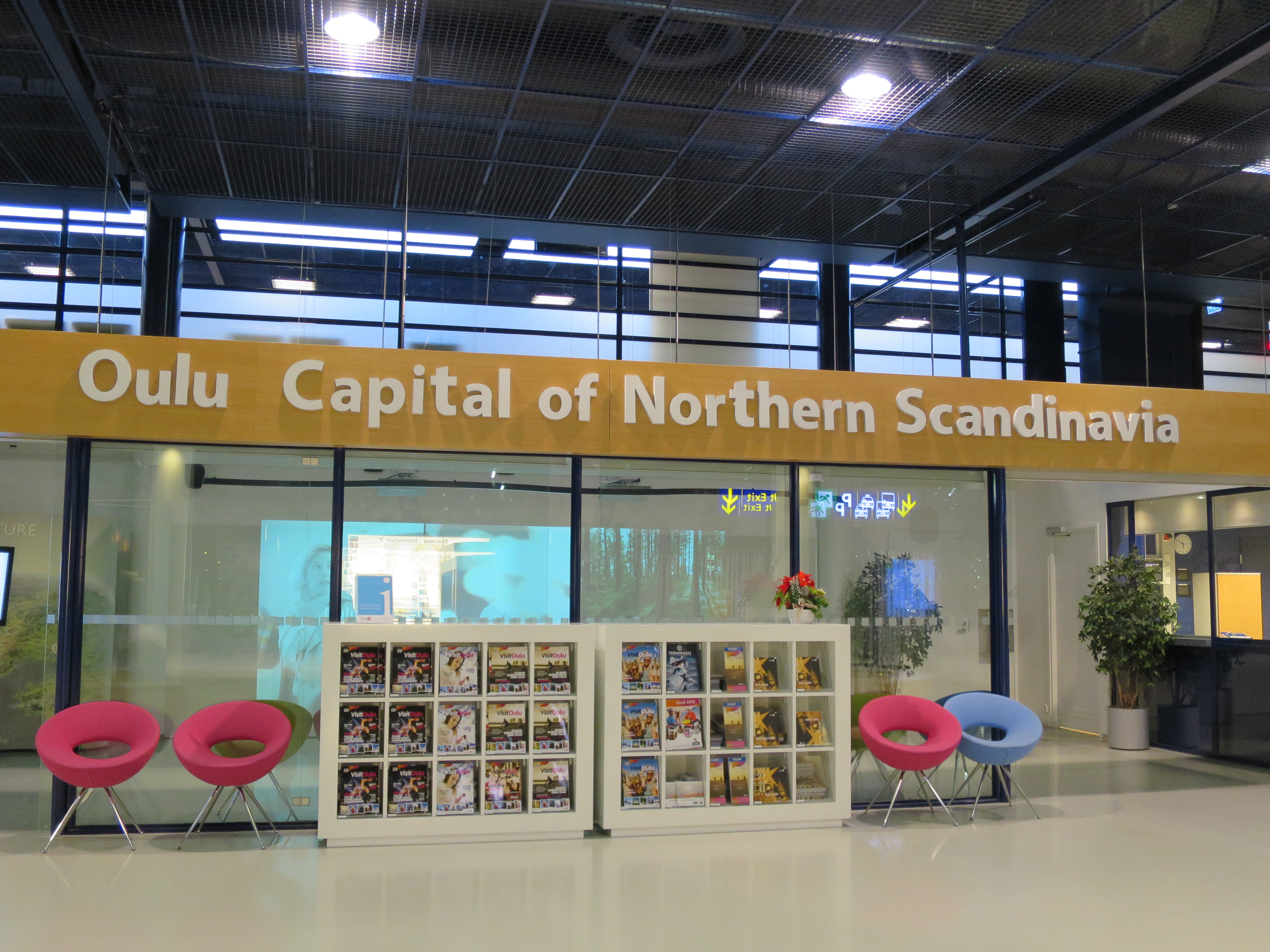 The industrial city of Oulu, the largest settlement in northern Finland, markets itself as “the Capital of Northern Scandinavia.” The slogan can be found everywhere, from the entry to its small airport to the sides of its buses. But it’s soon going to have to change this to “The Muslim Child-Grooming and Rape Capital of Scandinavia.” The grooming scandal I wrote about last month has finally erupted into public debate—thanks in part to British Dissident Right journalist and activist Katie Hopkins.

Exactly as in Britain, Oulu’s authorities, police and newspapers had been colluding to conceal the arrest of 7 Muslim “refugees” for grooming and sexually assaulting white girls—aged between 10 and 14—from the Finnish people. They were thwarted by an intrepid independent nationalist councilor Junes Lokka. Now the situation has spiraled entirely out of control. Hence Katie Hopkins has made her way to the Arctic city to find out what’s going on.

On December 10th, about 100 furious Finns turned up to protest about the rapes and their cover up in front of Oulu City Hall. At one point, a “foreign background” (“Muslim”) construction worker, carrying a knife, stood on the city hall’s steps to defend Islam before being disarmed, dragged off the steps, beaten up, and then taken away by the police. [Oulun pe­rus­suo­ma­lais­ten mie­le­no­soi­tuk­ses­sa kahnaus, Kaleva, December 10, 2018]

Many of the child-rape cases had been in Tuira, a run-down area of Oulu in which immigrants are routinely housed by the authorities. In mid-December two completely new cases, both in Tuira, were unearthed, with separate victims and Muslim “refugee” perpetrators. At the time of writing, in Oulu alone, there are 9 separate cases with 16 different suspects according to Finnish Wikipedia. [Oulun seksuaalirikokset 2018 (Oulu Sex Crimes 2018 ) January 15, 2019].

By early January, it had come to light that—in a hitherto unreported case—a 14 year-old Oulu girl had been groomed and raped in August 2018 and had committed suicide a few months later. Oulu police took to the national newspapers to deny this story. [Poliisi oikoo vääriä huhuja Oulun seksuaalirikoksista, By Merja Ranta, Ilta-Sanomat, January 3, 2019] But a week later, on January 11th, they were compelled to admit that it was true [Oulun tapahtumat kauhistuttavat suomalaisia, Suomen Uuutiset, January 11, 2019]. 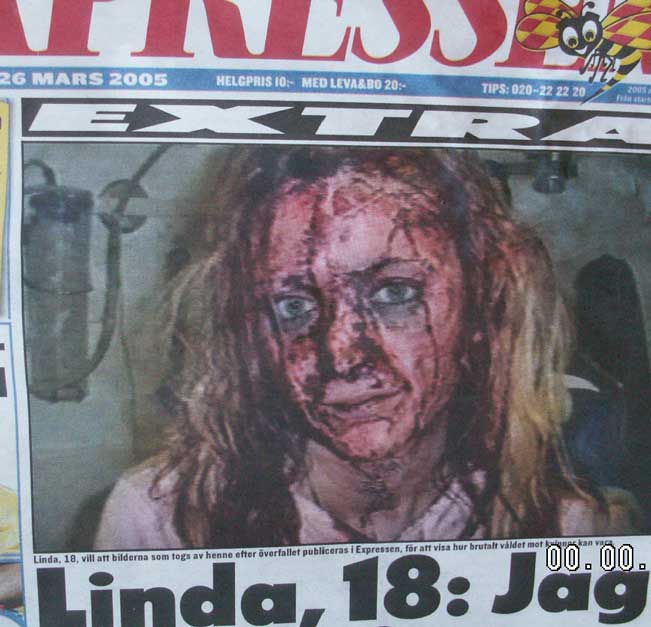 The Finnish press never provides the names or photos of such victims which, while protecting their family’s privacy perhaps makes them less real. (“Linda”, the anonymous Swedish victim of Muslim rape at right, insisted that her photograph be made public, to allow the public to see the brutality of these attacks.)

The next day, around 50 members of a anti-Muslim-rape vigilante group calling itself Soldiers of Odin made their way to Oulu’s large shopping center Valkea. Until the gang rapes gained public attention, this had been a Mecca for Muslim groomers, who hang around, attempting to entice underage girls to their apartments with promises of alcohol. The uniformed vigilantes went to the notorious mall and then marched through the city, something recorded by Junes Lokka and his similarly mettlesome fiancé, vice-councilor Tiina Wiik, who blogs as “Swan of Tuonela”.

Watch the (peaceful) march below:

Wishing to quell the growing public anger, the same evening, January 12th, both the Finnish Prime Minister and its Interior Minister made their way 335 miles from Helsinki to Oulu City Hall to give a press conference.

Prime Minister Sipilä had, in 2015, infamously gone back on election promises to cut immigration to allow these child-rapists to enter Finland while the Interior Minister, Kai Mykkänen, is on record as having suggested that the country of 5.5 million should give refugee to 10,000 Muslim migrants annually, rather than the current level of approximately 1,000. [Uutissuomalainen: Sisäministerinä aloittava Mykkänen: Suomi voisi ottaa jopa 10 000 kiintiöpakolaista, February 10, 2018]

Amidst the throng of Finnish Lügenpresse, the heroic Junes Lokka was present to confront both the Interior Minister and the Prime Minister with what they’d said and done. Lokka also suggested that the there was nothing about Oulu itself which meant there was Muslim-grooming in the city, other than the presence there of a campaigner—Lokka—who had cut through the establishment lies and worked out what was happening.

Having heard about the appalling situation in the “Rape Capital of Scandinavia,” Katie Hopkins turned up in Oulu the day after that. Hopkins rose to infamousness in 2006 via the British version of The Apprentice, before embarking on a career as a media controversialist, writing for various newspapers and frequently appearing on British TV as a commentator. Remarks on the Muslim suicide bombing of a Manchester Ariana Grande concert in 2017 saw her ostracized from Britain’s Main Stream Media and she now appears to be trying to develop a career as a Dissident Right commentator.

Standing in front of Oulu City Hall, Hopkins told an Lügenpresse interviewer than she had been supposed to interview Oulu’s mayor but the mayor had sent a representative, Ari Heikkinen instead. This representative had claimed that 16 Muslim child-rapists did not constitute a “gang” and that 4 out 5 rapes in Finland were committed by Finns, an assertion which, Hopkins pointed out, rather ignored the fact that Muslim refugees make up nothing like one fifth of the population—more like a 55th.

Watch her interview with Heikkinen below:

Hopkins berated the MSM, specifically state broadcaster YLE, for colluding in covering-up the gang rape situation in Oulu and helping to create a culture where people live in fear of being accused of “racism”.

Watch her interview with YLE below:

Hopkins had come to the country with Elisabeth Sabaditsch-Wolff, an Austrian anti-Islam campaigner who was convicted of blasphemy in her home country for pointing out that the Prophet Mohammed was a pedophile. The conviction was upheld by the European Court, in spite of the fact that it’s a matter of historical record that Mohammed had a nine-year-old wife [Elisabeth Sabaditsch-Wolff responds to EU court’s ruling that speech insulting Muhammad is prohibited, By Christine Douglass-Adams, Jihad Watch, October 27, 2018]

Later in the day, the group made their way to Oulu’s Heikinharju refugee reception center, where they managed to sneak inside and photograph the (little-reported) amount of money that the residents receive from the Finnish tax payer every week, on top of their accommodation, food and lavish private healthcare—312 euros pocket money per month.

Photo via Katie Hopkins on Twitter, in English because more migrants read it than Finnish.

The hapless security guard demanded Wiik’s identification papers, something he had no right to do and which were not forthcoming. The security guard then, dishonestly, told them they were on private property and had to leave even the garden surrounding the center, threatening to call the police.

Watch the visit to the refugee center below:

Oulu police, under more pressure than ever, revealed on January 15th that, in 2018, there had been 67 cases of sexual assault of girl under the age of 16, a further 18 on girls aged between 17 and 18. [Katso oman kuntasi tuoreet luvut: 10–17-vuotiaisiin nuoriin kohdistuneiden seksuaalirikosten määrät julki, Ilta-Sanomat, January 15th 2019

Despite the freezing conditions, it seems that a dam has broken in Finland and both the MSM and the immigration enthusiast Finnish government are finding it impossible to plug.

It only goes to show what two patriotic activists can achieve if they are fearless and tenacious enough. Perhaps Finland, unlike Sweden but like Denmark and Norway, might be able to slow down its own government-directed destruction—or even reverse it.