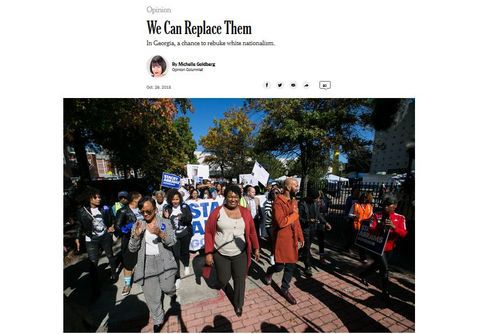 NYT: "We Can Replace Them"

We Can Replace Them
In Georgia, a chance to rebuke white nationalism.

… Right now America is tearing itself apart as an embittered white conservative minority clings to power, terrified at being swamped by a new multiracial polyglot majority. The divide feels especially stark in Georgia, where the midterm election is a battle between Trumpist reaction and the multicultural America whose emergence the right is trying, at all costs, to forestall. …

Kemp is the candidate of aggrieved whiteness.

… In a week, American voters can do to white nationalists what they fear most. Show them they’re being replaced.

Seriously, you can tell that there are very few grand conspiracies in this world, that instead there are just people doing whatever the hell seems like a good idea to them at the moment, because nobody important is going to order Michelle Goldberg to ix-nay on the Replacement rants: the secret master plan is supposed to be a secret!

Even more seriously, the Immigration Weapon needs to be driven out of American politics. It’s way too tempting to try to use immigration to elect a new people, which in turn sets off a psychologically inevitable chain of thought about how the old people deserve their replacement. Allowing one side to try to win elections through altering the electorate via immigration is like allowing a football team to bring brass knuckles, razor blades, and guns onto the field. We need a national understanding that using immigration to try to win without having to persuade the current voters is not some sacred rite, it’s incredibly destructive to democracy and it should be shunned by all.

At this point, everybody needs to take a breath and calm down.

I admire Bernie Sanders because he got to be about 75 years old seemingly without it occurring to him that morality demands that he win by replacing the electorate with more Bernie-friendly voters.

Bernie always seemed to assume that the right way to win was by persuading the existing electorate that he was right and the other side was wrong. What a dinosaur! Everybody knows nowadays that Democrats deserve to win by rigging the election by importing a new electorate.