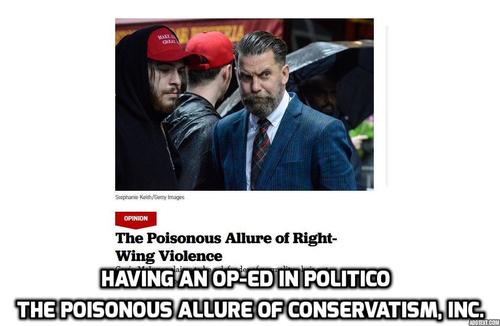 The Proud Boys clashed with Antifa because the black-masked anarchists were robbing and assaulting people who were leaving an event addressed by McInnes at New York’s Metropolitan Republican Club. As soon as video emerged of the scuffle, the Left and their journalist auxiliaries and quickly went into histrionics. [Gavin McInnes and the Proud Boys: An Extremist Far-Right Group, Explained, by Christianna Silva, Teen Vogue, October 18, 2018] Conservatism, Inc. was all too willing to join in.

Leading the Conservatism, Inc. charge against the Proud Boys: National Review editor-in-chief Rich Lowry. In an op-ed published at Politico, Lowry [Email him] sobbed over the “poisonous allure of right-wing violence” and dismissed McInnes as nothing more than an opportunistic huckster—unlike the very principled conservative-denouncing professional token conservatives in POLITICO. The cuckservative gatekeeper also attacked McInnes’ for writing for—GASP!—“rancid” sites like VDARE.com and Takimag (as opposed, presumably, to flaccid sites like NRO) before delivering his opinion on what real men do in the face of Antifa violence: apparently, nothing.

“[P]atriotic suburban dads have better things to do than roam the streets of Manhattan getting into brawls with black-clad left-wingers, nor is this an activity conducive to meeting a nice girl and settling down,” Lowry lectured his audience. “The atavistic impulse of the Proud Boys is straight from the movie Fight Club, in which a violent men’s group represents a revolt against banal, overly feminized modern society”. [The Poisonous Allure of Right-Wing Violence, by Rich Lowry, POLITICO, October 17, 2018]

Who knew there were so many conservatives opposed to “toxic masculinity”? Lowry concludes with the favorite Conservatism, Inc. admonishment that “two wrongs don’t make it right” without any acknowledgement that the Left and its MSM enforcers don’t see Antifa’s suppressing conservative meetings as bad—nor, of course, of McInnes’ constant efforts to position the Proud Boys as multiracial civic nationalists (which have done him no good whatever)

Respectable conservatives prefer standing on imaginary moral high ground rather than fight for their own supposed interests. But turning the other cheek to Antifa and denouncing anyone who dares to punch back will not quell Leftist violence. It rewards it, and only makes conservatives look like cowards.

Unfortunately for the Proud Boys, Conservatism, Inc. condemnation is the least of their concerns. The media paints them as Neo-Nazi thugs although they boast more racial diversity than HuffPost and have repeatedly disavowed white nationalism. The “Hate Group” label has stuck as usual, making anyone affiliated with the Proud Boys subject to employment termination—several in New York were arbitrarily fired from their jobs the day after Trump’s election—and other severe harassment. The Twitter accounts for the group, McInnes and several prominent members have been permanently suspended. More censorship will likely follow. [Twitter Bans Conservative Commentator Gavin McInnes, by Allum Bokhari, Breitbart News, August 10, 2018]

But the persecution of the Proud Boys is no concern for Conservative Inc., even though they are the only group willing to defend patriots from Antifa violence. The Respectable Right are clearly more than happy with the Left taking out the “disreputable” elements of its Dissident Right competition.

Conservatism, Inc. also demonstrated this unmanly behavior this summer when Alex Jones’ Infowars was banned from multiple social media outlets. Most conservatives—like Ben Shapiro—mustered up a lukewarm disapproval for Big Tech’s silencing of Jones, hardly equal to the outrage they directed toward Jones himself.

But a few prominent voices went so far as to praise Facebook and Google for their suppression of free speech.

Weekly Standard digital editor Jonathan Last [Tweet him] argued that the Internet was right to ban Alex Jones and “that there’s no reason for conservatives to defend this guy.” Last claimed that these tech giants are private companies who can ban whoever they want, and free speech doesn’t mean you are free from consequences. He also insisted Infowars wasn’t denied equal access because it’s still on the Internet—just not on social media—in a profoundly out-of-touch statement on modern communication [The Case for Banning Alex Jones, by Jonathan V. Last, Weekly Standard, August 8, 2018]

Last’s primary argument for banning Jones was that he violates “minimum standards of decency” and conservatives should not worry about a slippery slope. In fact, conservatives should urge Big Tech to go further in censorship because “[t]he conservative view isn’t just that communities have the right to create standards—we have always believed that there is wisdom and virtue in doing so.” Thus YouTube is truly a haven of virtue thanks to its elimination of right-wingers. [YouTube is still plagued with disturbing kids' videos, by Mallory Locklear, EndGadget, March 23, 2018]

Daily Beast contributor Ben Howe, a former Red State writer purged for hating Trump, echoed Last’s opinion in a more self-serving, less intelligent way in an August column. Howe spent most of his time in the column using the word “I” and making dumb arguments about respecting private enterprise is the core virtue of conservatism. He ends his argument with a paean to himself and his supposed bravery for standing athwart the Right’s opposition to corporate censorship. In his nonsensical conclusion, he also dismisses conservatives for tweeting because they’re nobodies who just want relevance. [Conservatives Should Shed Absolutely No Tears for Alex Jones, by Ben Howe, The Daily Beast, August 9, 2018]

A more nuanced take for censoring uncouth right-wingers came from National Review’s David French. In an op-ed for the New York Times—the dream of all Respectable Right types—French [Tweet him] offered a “better way to ban Alex Jones.” Instead of relying on hate speech grounds, the conservative lawyer said social media should ban Jones for libel and fake news.

It apparently did not occur to French that this argument creates another double-standard. It’s doubtful he would dare to advocate that this standard applied to mainstream outlets that spread erroneous reports, so only right-wing sites would be subject to these rules. One report deemed false by a Leftist “fact-checker” could doom a conservative site’s access to social media. [A Better Way to Ban Alex Jones, by David French, New York Times, August 7, 2018]

So once again, a conservative made an argument against his supposed side’s own interests to gain respect from his enemies. That’s a fitting summary of Conservative Inc.’s efforts against the pro-Trump Right.

Trump is transforming the American Right and is well on the way to overturning the decadent Conservative Establishment. The Left and the media are dedicated to stamping out these challenges because they’re “racist” and don’t respect their hegemonic authority. Conservatism, Inc. thinks it can just sit back and watch, comfortable in the delusion it will be preserved from the persecution.

Of course, it’s stupid if them to think this, given the censorship of PragerU and the violence inflicted against Charles Murray and Heather Mac Donald. But Conservatism Inc. is stupid. That’s how they let Trump take the GOP away from them. And on present form, when Antifa comes for them, the Proud Boys won’t be around to attend them.

Julian Bradford [Email him] is a millennial professional from the Heartland.