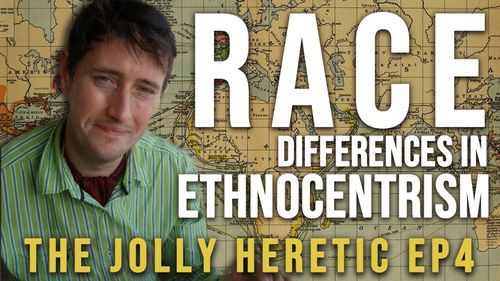 In September 2015, the European Union was subject to what has become known as “The Great Migration.” [Prepare yourselves: The Great Migration will be with us for decades, by Fraser Nelson, Telegraph, September 3, 2015]In a matter of weeks, hundreds of thousands of people—most of them young and male, from Syria and other parts of the Muslim world—illegally overwhelmed the hapless southern European border controls. Before long, columns of them were marching through Eastern Europe, determined to get to Germany or the UK and “claim asylum”—ignoring the assorted “safe countries” through which they’d already passed. Finland-based English anthropologist Dr Edward Dutton was fascinated by the huge differences in how different ethnic groups reacted to these supposed “refugees.”

Western Europe went into virtue-signalling, faux-pity meltdown, with German Chancellor Angela Merkel taking in a million refugees and Finnish Prime Minister, Juha Sipilä, disingenuously offering to place some of them in his own house.

Eastern Europe, in stark contrast, saw this as an invasion of their ethnic homelands, with even their ruling class making clear that they weren’t going to take “EU quotas” of these future suicide-bombers. 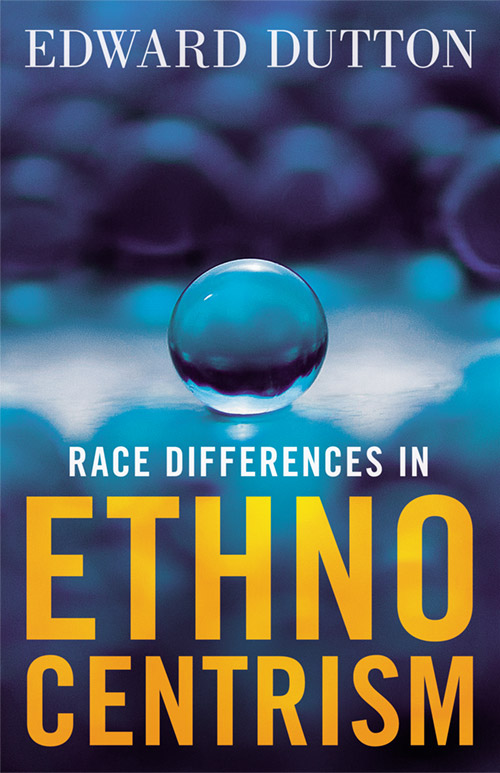 Israel, other Middle Eastern countries and Japan were adamant that they weren’t going to take any at all. [Netanyahu Rejects Calls for Israel to Accept Syrian Refugees,  by Isabel Kershner, NYT, September 6, 2015]

How could these wildly different reactions be explained?

The result is Dutton’s new book Race Differences in Ethnocentrism, published by Arktos, which has interviewed him in detail about his new work on its own YouTube channel, Interregnum.

Interregnum #34—Race Differences in Ethnocentrism with Edward Dutton,  May 30, 2019

In the book, Dutton brings together all of the disparate research on this taboo topic—including his own, published with Richard Lynn in such scholarly journals as Personality and Individual Differences—to test whether there really are “race differences in ethnocentrism” and, if so, how these have come to develop.

Dutton divides between “positive ethnocentrism”—meaning that you cooperate with your in-group, cherish it and make sacrifices for it—and “negative ethnocentrism”: that you see the outgroup as inferior and are prepared to destroy it. He highlights computer-modelling which has conclusively demonstrated that in the battle of “group selection”—between ethnic groups which are ultimately extended kinship groups and genetic clusters—the more ethnocentric group ultimately triumphs. This makes Dutton’s research, as he stresses, extremely pressing: understanding what’s going on and why is a matter of ethnic life and death.

For Dutton, there are both genetic and environmental factors involved in understanding race differences in ethnocentrism. He shows that Northeast Asians are consistently more ethnocentric than Europeans. To understand why, he suggests that their highly-predictable yet extremely harsh ancestral ecology has led to selection for tightly-structured, highly-cooperative groups with very small gene pools, because any deviation from extreme adaptation would be selected out. This makes them positively ethnocentric and, with a small gene pool, strongly incentivised to fight outsiders, who will inherently be very different from them. Deeply rule-following, they are also strongly averse to the “change” that foreigners will bring.

The result: extremely high altruism and conscientiousness but very few outliers either in terms of personality or IQ. Thus, argues Dutton, Northeast Asians cannot easily produce scientific geniuses—who will invent things that will allow you to win the battle of group selection—because geniuses tend to combined outlier high IQ plus moderately low conscientiousness and altruism: this means they don’t care about breaking the rules or offending vested interests. With a small gene pool, these geniuses are less likely to be produced in Northeast Asia, as are those with outlier high IQ or moderate psychopathic personality, because the flipside of this will be low IQ psychopaths who would undermine group cohesion.

So, the only way Northeast Asians can “fight” is through high ethnocentrism and Dutton shows that this fits with what we know of their genetics.

With Europeans, Dutton argues, a different and in many ways superior strategy presents itself. Subject to less stringent environment, they have a larger gene pool, meaning that they are able to produce geniuses. Moreover, being less ethnocentric, they are better able to trade. This allows them to expand and beat other groups in the battle of group selection, due the remarkable weapons and other inventions which their geniuses have provided. Accordingly, it benefits them to be optimally low in both aspects of ethnocentrism, at least under Darwinian conditions in which religiousness and mortality salience uphold this optimum minimum. Their “Genius Strategy” allows them, in effect, to dominate the world.

Dutton has looked at this in a number of his videos on his growing YouTube channel, The Jolly Heretic.

Then Dutton moves to the Islamic world. With a not very stable nor very harsh ecology, they have low IQ (as environmental harshness selects for IQ) and a very large gene pool. This means they certainly won’t compete in the battle of group selection with a genius strategy and there’s no natural selection towards an ethnocentric one.

Well, maintains Dutton, the common Middle Eastern phenomenon of cousin marriage means that even if you have paternity anxiety you might as well invest in the child because it will be closely related to you. It also creates a small gene pool and thus negative ethnocentrism. Female circumcision reduces female sexual desire and means you can better trust that a child is yours, leading to fewer jealous fights between men. Patriarchal religiousness, including the veiling of women, controls females, meaning less paternity anxiety and more of a reason for males to cooperate. It also provides single males with a purpose, as martyrs for the ethnic group.

Ultimately, this renders South Asians more ethnocentric than Europeans. In a recent episode of the Jolly Heretic, Dutton has cuttingly explored the evolution of female circumcision in this regard.

Finally, black Africans are more negatively ethnocentric than Europeans but not very positively ethnocentric. Their levels of impulse control are often too low to permit institutions such as cousin marriage. So, they simply split constantly into different factions and may even be attracted to marrying those of a different race, as in a very unstable ecology that may bring the offspring some genetic benefits. Hence, the “black goes for blonde” stereotype.

Having explored the genetic dimensions, Dutton turns to the environment. He argues that the Industrial Revolution led to the gradual collapse of Darwinian selection in the West. This has resulted in the collapse of environmental stress and morality salience, which elevate ethnocentric instincts and also religiousness. Religiousness, he shows, itself predicts ethnocentrism. The Industrial Revolution led to larger gene pools in European countries, people marrying those who are more genetically distant, and immigration which (he demonstrates) undermines ethnocentrism even among the natives by sowing distrust.

It also meant that child mortality collapsed from 40% in 1800 to 1% today. But high child mortality culled out those with mutant genes of the body. Drawing upon research by his colleague Michael Woodley of Menie, Dutton argues that these correlate with mutant genes of the mind which lead to instincts that are highly maladaptive. Thus, we see more and more people—“spiteful mutants” in Woodley of Menie’s words—with maladaptive instincts such as xenophilia, anti-ethnocentrism and anti-natalism, and these people influence even non-carriers to behave in a maladaptive way through means of persuasion.

These “spiteful mutants” push society to allow people from countries that have been under Darwinian selection for longer—such as those from the Middle East—to enter their societies and outcompete them in evolution.

Multiculturalism is akin to introducing wild animals into a zoo full of domesticated ones. Accordingly, the wild animals will simply out-breed and come to take over the Western country in question. It seems fairly clear that in the early 2000s this is precisely what is happening in Western countries.

Nevertheless, Dutton ends Race Differences in Ethnocentrism on a note of optimism for European people. It is only Europe’s high IQ which is sustaining this “zoo.” Intelligence, he shows, is in genetic decline with only those of low IQ and also the highly traditionally religious (and thus highly ethnocentric) having above replacement fertility.