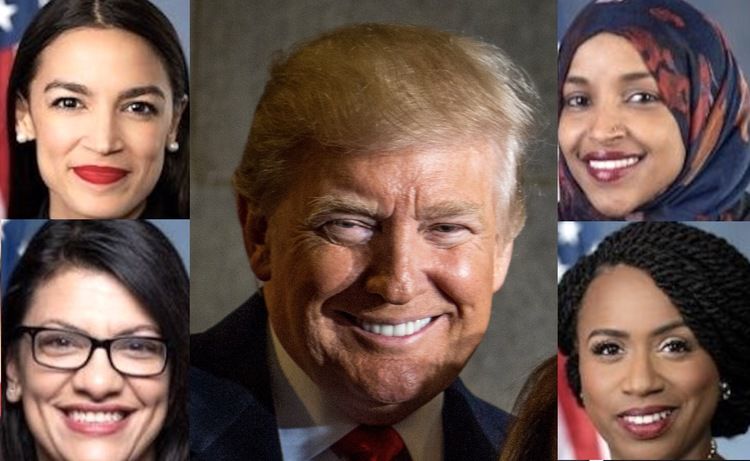 President Donald Trump's playground taunt Sunday that "the Squad" of four new radical liberal House Democrats, all women of color, should "go back and help fix the totally broken and crime-infested places from which they came," dominated Monday morning's headlines.

Yet those headlines smothered the deeper story.

The Democrats are today using language to describe their own leaders that is similar to the language of the 1960s radicals who denounced Democratic segregationist governors like Ross Barnett and George Wallace.

Consider what the four women have been saying.

Alexandria Ocasio-Cortez has accused Speaker Nancy Pelosi of attacking "newly elected women of color." Was she calling Pelosi a "racist"?

"No!" protested AOC. But it sure sounded like it.

AOC's chief of staff Saikat Chakrabarti attacked Native American Rep. Sharice Davids for her vote on a Pelosi-backed bill that sent $4.6 billion in aid to the border but lacked the restrictions on Trump policies progressives had demanded.

Chakrabarti described Davids' vote as "showing her ... enable a racist system," adding that some Democrats "seem hell bent to do to black and brown people what the old Southern Democrats did in the '40s."

The House Democratic Caucus ripped Chakrabarti, "Who is this guy and why is he explicitly singling out a Native American woman of color?"

This comes close to calling members of the Black Caucus "Uncle Toms."

Monday, the president doubled down, tweeting:

"We all know that AOC and this crowd are a bunch of Communists, they hate Israel, they hate our own Country, they're calling the guards along our Border (the Border Patrol Agents) Concentration Camp Guards, they accuse people who support Israel as doing it for the Benjamin's"

The "Benjamins" recalls Ilhan Omar's accusation that the Israel Lobby buys the votes of members of Congress. "It's all about the Benjamins baby."

Rashida Tlaib of Michigan and Somali-born Ilhan Omar of Minnesota are the other congresswomen in Trump's sights. Together, the four have achieved a prominence that almost exceeds that of Majority Leader Steny Hoyer or Majority Whip James Clyburn.

The four—AOC, Tlaib, Pressley, Omar—have no clout in the Democratic caucus. But because of the confrontations they have caused and the controversy they have created, they have a massive media following.

Paradoxically, their interests in winning cheers as the fighting arm of the Democratic Party coincide with the interests of Donald Trump. He entertains and energizes his base by answering in kind their attacks on him and by adopting incendiary rhetoric of his own. He is now assuming the old "America! Love it or Leave it!" stance in going after the four women as anti-American ingrates.

They, by calling Trump a criminal, racist and fascist for whom impeachment proceedings should have begun months ago, elate and energize the outraged left of their party.

Among the presidential candidates, some have begun to side with the four, with Bernie Sanders saying Pelosi has been "a little" too tough on them.

On "Meet the Press," Bernie added: "You cannot ignore the young people of this country who are passionate about economic and racial and social and environmental justice. You've got to bring them in, not alienate them."

Trump's Sunday attack forced Pelosi to stand with her severest critics, and she re-elevated the race issue with this tweet: "When Trump tells four American Congresswomen to go back to their countries, he reaffirms his plan to 'Make America Great Again' has always been about making America white again."

Do Democrats believe that refighting the racial battles of the 1960s that were thought to have been resolved is a winning hand in 2020?

Does Pelosi think that demeaning white America is going to rally white or minority Americans to Democratic banners?

The race issue had already arisen in the first debate when Sen. Kamala Harris called out front-runner Joe Biden for befriending segregationist Senate colleagues in the '70s and '80s, and for colluding with them to block court-ordered busing to achieve racial balance in the public schools.

Observing the clash between Trump and these women, the rank and file of the Democratic Party are being forced to take sides. Many will inevitably side with the fighters, as Democratic moderates appear timid and tepid.

Trump is driving a wedge right through the Democratic Party, between its moderate and militant wings. With his attacks over the last 48 hours, Trump has signaled whom he prefers as his opponent in 2020. It is not Biden; it is "the Squad."

Sunday, Pelosi recited again her mantra, "Diversity is our strength; unity is our power." It sounded less like a proclamation than a plea.

We see the diversity. Where is the unity?</p