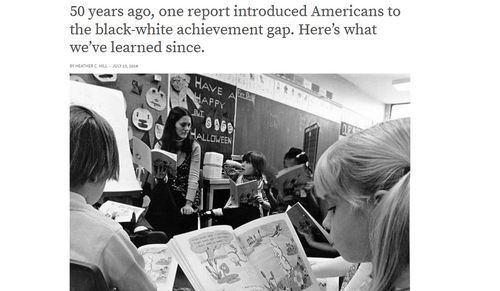 In Joe Biden's interview, he talks about the famous Coleman Report [PDF] the 1966 study mandated by the 1964 Civil Rights Act that we here have referred to repeatedly. Coleman wasn't sure anything could be done to close the "achievement gap", which he can be said to have officially discovered, in a social science way.(People who knew about the achievement gap before Coleman discovered it were called "racists".)

Professor Coleman, an educator, first suggested the possible benefits of busing in a 1966 report. Now in 1975 Coleman says, "Guess what? I was wrong. Busing doesn’t accomplish its goal.”

Here's what Wikipedia says James R. Coleman was writing in 1975:

In 1975, Coleman published new research that further investigated the effects of school busing systems, intended to bring lower-class black students to upper-class, racially integrated schools. Upon advancements in school desegregation, white parents began to move their children out of integrated schools in large numbers. The mass exodus was termed white flight. In 1966, Coleman wrote an article asserting that black students benefited from integrated schooling only if most of the students were white.

Coleman's findings regarding "white flight" were not well received in some quarters, particularly among some members of the American Sociological Association. In response, efforts sprang up during the mid-1970s to revoke his membership. Still, Coleman remained a member and eventually became its president.

We should be concentrating on things other than busing to provide for the educational and cultural needs of the deprived segment of our population. But we’ve lost our bearings since the 1954 "Brown vs. School Board” desegregation case. To "desegregate” Is different than to "integrate." I got into trouble with Democratic liberals in 1972 when I refused to support a quota-system for the Democratic National Convention. I am philosophically opposed to quota-systems; they insure mediocrity. The new integration plans being offered are really Just quota-systems to assure a certain number of blacks, Chicanos, or whatever in each school. That, to me, is the most racist concept you can come up with; what it says is, “In order for your child with curly black hair, brown eyes, and dark skin to be able to learn anything, he needs to sit next to my blond-haired, blue-eyed son.” That's racist. Who the hell do we think we are, that the only way a black man or woman can learn is if they rub shoulders with my white child? The point is that if we look beyond the "old” left to the "New Left," almost all the new liberal leaders and civil rights leaders oppose busing.

TV News. If nobody wants it, where did it come from?

Biden. It has come from the courts primarily, from people who were—for the most part—appointed during the 60’s, at the height of the civil rights activist movements. The thrust at that time was to force integration, to eliminate racial identities in the hope that then we'd all live happily ever after. It was probably a necessary first-step then, and I would probably have shared that viewpoint, had I been around then.

Let's get the chronology straight here: Biden, 30 years old in 1975, is pointing out that the real Civil Rights struggles happened before he was old enough to vote—and they're now over. He's also keenly aware of what we call "Kritarchy"--rule by judges.

So what we have now is a court-administered system that is ten or twelve years behind what I believe is accurate, rational thinking. There are other things besides busing that we should be addressing to deal with these problems. For example, during my campaign I went on record in support of a single statewide school district tax, and I got clobbered for it.

Well, if we'd done that, we wouldn't have to be talking about busing now; it wouldn't even be an issue. We would have undercut the argument about equal distribution of educational benefits.

Biden isn't quite on the same page as us here at VDARE.com, but his point is that busing was supposed to be good for black kids, and it wasn't. He also seemed to care about what it was doing to the white community. I'm sure he's apologized for that.