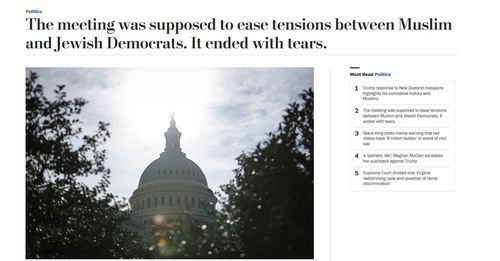 The Coalition of the Fringes Holds a Muslim-Jewish Encounter Session. It Doesn't Go Well.

The meeting was supposed to ease tensions between Muslim and Jewish Democrats. It ended with tears.

It was supposed to be a chance for Muslim and Jewish House Democrats to ease tensions and find common ground. It ended with one lawmaker in tears.

At a late-night meeting blocks from the Capitol, about a dozen lawmakers shared their raw experiences with bigotry and discrimination, hoping the stories would bridge the glaring interfaith divide. Suddenly, Rep. Dean Phillips, a Jewish Democrat, shattered a moment meant to be about listening and learning — not politics.

Rep. Phillips, scion of the Phillips Distillery fortune, looks like a (mostly) reformed stoner. Party hearty, Dudes! He’ll be starring in Bill and Ted and Dean Go to Washington.

Phillips felt he had to address what had been unspoken for nearly two hours — the recent divisive remarks of Rep. Ilhan Omar, a Muslim who suggested American supporters of Israel have an “allegiance to a foreign country.”

Those kinds of remarks, Phillips said, represented “tips of the arrow” — small but devastating offenses that made Jews fearful of a rising tide of anti-Semitism. Phillips told his fellow Minnesota freshman that she had to apologize and said the group should publicly affirm Israel’s right to exist and protect itself.

His words stunned the three Muslim Democrats in the room, as well as some other Jewish members and third-party participants. Rep. Rashida Tlaib (Mich.), a Palestinian American who is critical of the Israeli government’s treatment of the Palestinians, grew emotional and started to cry as she spoke of her grandmother’s suffering in the West Bank at the hands of Israelis. “She would treat you like a grandson,” she said to Phillips, according to two people in the room.

The abrupt end to the March 5 meeting — the second gathering aimed at reconciliation — was a discomfiting moment in a previously unreported, behind-the-scenes effort inside the diverse class of House Democrats to foster tolerance amid the withering pressure of Washington.

Democrats’ convulsive efforts to respond to Omar’s recent criticisms of Israel have exposed ugly rifts in the party over religion and U.S. ally Israel that have boiled over on Twitter and in the public sphere. Those fights within the party have distracted from the party’s legislative agenda and fueled political attacks from Republicans, including President Trump. …

House Democratic leaders responded with a sweeping resolution condemning all forms of hate that passed overwhelmingly on March 7.

“Hate” of course being defined in effect in the Resolution as an emotion to which straight white males, those hateful bastards, are prey, but nobody else has to worry about it.

… When the group met two days later at a former lawmaker’s house on Capitol Hill, the controversy had mostly cleared, and Raskin was determined to keep the mood casual, according to several who attended who spoke on the condition of anonymity to discuss the private sessions. 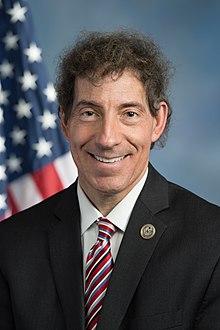 Rep. Raskin looks like if Elliott Gould had beaten out Robert Redford for the lead in The Candidate.

He asked everyone to go around the room to say something about a grandparent, starting the conversation by talking about how his grandfather had been the first Jewish member of the Minnesota legislature — a pathbreaker like many of the freshman House Democrats.

The Congressman probably should have also brought up to the Muslims how his great-grandfather had been forced to help found the Oak Ridge Country Club in 1921, after he had been blackballed at the White Bear Lake Yacht and Golf Club.

“I mean, they let that drunken Irishman F. Scott Fitzgerald play golf, but no, my great-grandfather wasn’t good enough for them. Who did those White Bear Lake snobs think Fitzgerald bought his moonshine from? I think back on this … hate every time I tee off with my regular Sunday morning foursomes at Oak Ridge and Columbia. Heck, we let Obama into our Columbia CC even though he’s kind of a Muslim, you know, like you people? Despite all the grumbles you might have read in the paper, the vote on whether to blackball Obama wasn’t even close, despite the whole “Hussein” and Iran Deal things. Forgive and forget: that’s our motto …” *

* Note: The Congressman didn’t actually say any of this. I made it all up.

In fact, I got Congressmen Phillips and Raskin confused and blended them together. Raskin is from Maryland and his dad was on JFK’s National Security Council. Phillips’ grandma was Dear Abby.

The idea, according to people familiar with the session, was to humanize each other. Raskin would not discuss details of the meeting but said that he is “constantly trying to get members together to talk about the experiences and values that have brought them into public life.”

Phillips, a wealthy businessman representing the Minneapolis suburbs, spoke of his grandmother teaching him piano and how he was adopted from a poor family into a wealthier one after his father died in the Vietnam War.

Rep. André Carson (Ind.), a Muslim convert elected in 2008, told a story about his grandmother picking him up from a shelter when he was little after his mother, who struggled with schizophrenia, had a severe episode. That grandmother, former congresswoman Julia Carson, ended up raising him and introducing him to politics.

But the conversations left some members wanting to delve deeper into personal struggles — especially in light of Omar’s comments. Rep. Andy Levin (Mich.), a former labor organizer and synagogue president, began organizing a more formal event that would focus on anti-Semitism, calling on leaders of a liberal Jewish group, Bend the Arc, to attend and moderate the discussion. …

When the small group convened, tensions emerged almost immediately. A Bend the Arc facilitator made a joke about Jews and money to try to clear the air. But Rep. Jahana Hayes (Conn.), one of the freshman allies invited to join the session, grew serious and asked why the facilitator could talk like that when someone like Hayes could not.

“It’s not okay,” Hayes said this past week when asked about the specific exchange. “These [sorts of jokes] are off-limits. It’s confusing for someone like me who is trying to learn.”

You are just supposed to know which facts you can’t mention. If you have to learn which facts are off-limits for you, can we really trust you?

Hayes, however said, the meeting — which delved into the history of anti-Semitism and charged language — was helpful for people who don’t know the meaning of certain words: “I’m looking to try to understand everybody’s perspective,” she said. “This isn’t my community.”

The conversation took a different turn as some non-Jewish members in the room admitted they didn’t know what anti-Semitism looks like. The Jews present appreciated the candor and sought to share stories illuminating why certain words had negative meaning.

Soon lawmakers were talking about their own experiences with discrimination.

Toward the end of the session, Phillips felt the need to bring up a personal hurt: Omar’s recent comments.

Omar, who supports a two-state solution to the Israeli-Palestinian conflict, said nothing as Tlaib described the effects Israel’s policies on her Palestinian family. Others in the room saw racial undertones in Phillips’s comments, offended that a white businessman representing an affluent suburban community was suggesting a black refugee such as Omar incited fear. …

Since then, the group has huddled on the House floor to discuss what happened. Although the exercise has been uncomfortable at times, many think it was worthwhile and are planning to do it again, perhaps focusing on anti-Muslim bigotry and racism.

Post
NYPD: Per Capita, Blacks In NYC 18.7 Times As Likely As Asians To Be Robbery Suspects
MORE...
POPULAR TAGS