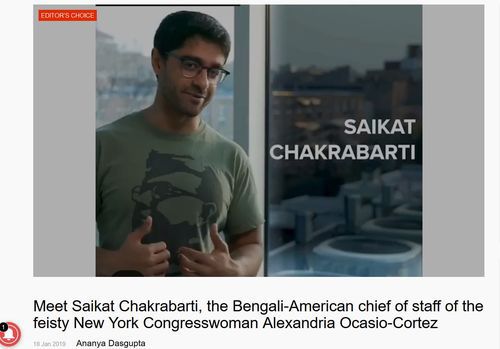 AOC's Indian Chief Of Staff Wears T-Shirt Featuring A Man Who Collaborated With The Axis In WWII—But It's OK Because He Hated Whites!

It turns out that the political activist of Indian descent, Saikat Chakrabarti, who co-founded Justice Democrats, helped elect Alexandra Occasional-Cortex, and is now her chief of staff, is a fan of a totalitarian Indian activist—Netaji Subhas Chandra Bose. Chakrabarti has at least two tee shirts featuring Bose—sort of an Indian Che shirt.

In The Bengal Story, Ananya Dasgupta, a leftist Bengali woman noticed this:

And then I noticed something interesting within her Instagram posts. A video of a scruffy-looking young man, wearing a moss green t-shirt with Netaji Subhas Chandra Bose’s face embossed on it. My Bengali Leftist sentiments were immediately jolted awake. In today’s world, who finds significance in Bose? Let alone find it through a sartorial statement in the United States. Meet Saikat Chakrabarti, the chief of staff of Ocasio-Cortez. He is also Bengali-American.

Born in Fort Worth, Texas, Chakrabarti is a Harvard graduate. Like millions of others, he spent years in Silicon Valley. Even co-founding a web design tool named Mockingbird and working on the product team of payment processor Stripe. In between, he walked the corridors of Wall Street for a while. But unlike many, he left all that behind to join the Bernie Sanders campaign

But Bose wasn’t just a socialist, he was Nazi/Japanese collaborator, fighting the British for the Axis, and dying in the crash of Japanese plane just after VJ Day. See Figures. Ocasio-Cartez’s Chief of Staff Has Sick Crush on Hitler Toady and Nazi Collaborator, by Jim Hoft, Gateway Pundit, February 10, 2019.

According to the Times of India "...Bose wanted ruthless dictatorship in India..." and furthermore:

"Netaji Bose, by his own admission in his book 'Indian Struggle'...believed India needed a political system that was a mix of fascism and communism—something he called Samyavad. Netaji made a special trip to Rome in 1935 to present a copy of his book to Italian dictator Benito Mussolini, whom he greatly admired and whose ideals he would follow for the rest of his life." Netaji Subhas Chandra Bose wanted ruthless dictatorship in India for 20 years,  by Manimugdha S Sharma, January 24, 2016

One wonders if Chakrabarti is the real power behind AOC—who doesn't appear to have the brains to get where she is by herself. In any case, birds of a feather flock together and AOC's association with the despot-loving Chakrabarti must make one suspect that she shares his values.